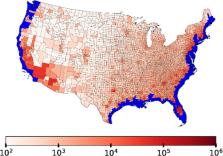 Life Expectancy and Mortality Rates in the United States, 1959-2017

Steven H Woolf,  Heidi Schoomaker (2019)
US life expectancy has not kept pace with that of other wealthy countries and is now decreasing.

Modeling migration patterns in the USA under sea level rise

Caleb Robinson,  Bistra Dilkina,  Juan Moreno-Cruz (2020)
Sea level rise in the United States will lead to large scale migration in the future. We propose a framework to examine future climate migration patterns using models of human migration. Our framework requires that we distinguish between historical versus climate driven migration and recognizes how the impacts of climate change can extend beyond the affected area. We apply our framework to simulate how migration, driven by sea level rise, differs from baseline migration patterns. Specifically, we couple a sea level rise model with a data-driven model of human migration and future population projections, creating a generalized joint model of climate driven migration that can be used to simulate population distributions under potential future sea level rise scenarios. The results of our case study suggest that the effects of sea level rise are pervasive, expanding beyond coastal areas via increased migration, and disproportionately affecting some areas of the United States.

More than 100 million Americans have diabetes or prediabetes