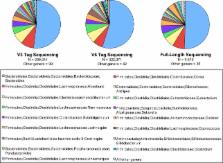 Massively parallel pyrosequencing of hypervariable regions from small subunit ribosomal RNA (SSU rRNA) genes can sample a microbial community two or three orders of magnitude more deeply per dollar and per hour than capillary sequencing of full-length SSU rRNA. As with full-length rRNA surveys, each sequence read is a tag surrogate for a single microbe. However, rather than assigning taxonomy by creating gene trees de novo that include all experimental sequences and certain reference taxa, we compare the hypervariable region tags to an extensive database of rRNA sequences and assign taxonomy based on the best match in a Global Alignment for Sequence Taxonomy (GAST) process. The resulting taxonomic census provides information on both composition and diversity of the microbial community. To determine the effectiveness of using only hypervariable region tags for assessing microbial community membership, we compared the taxonomy assigned to the V3 and V6 hypervariable regions with the taxonomy assigned to full-length SSU rRNA sequences isolated from both the human gut and a deep-sea hydrothermal vent. The hypervariable region tags and full-length rRNA sequences provided equivalent taxonomy and measures of relative abundance of microbial communities, even for tags up to 15% divergent from their nearest reference match. The greater sampling depth per dollar afforded by massively parallel pyrosequencing reveals many more members of the “rare biosphere” than does capillary sequencing of the full-length gene. In addition, tag sequencing eliminates cloning bias and the sequences are short enough to be completely sequenced in a single read, maximizing the number of organisms sampled in a run while minimizing chimera formation. This technique allows the cost-effective exploration of changes in microbial community structure, including the rare biosphere, over space and time and can be applied immediately to initiatives, such as the Human Microbiome Project.

Microbes play a critical role in both human and environmental health. The more we explore microbial populations, the more complexity and diversity we find. Phylogenetic trees based on 16S ribosomal RNA genes have been used with great success to identify microbial taxonomy from DNA alone. New DNA sequencing technologies, such as massively parallel pyrosequencing, can provide orders of magnitude more DNA sequences than ever before, however, the sequences are much shorter, so new methods are necessary to identify the microbes from short DNA tags. We demonstrate the effectiveness of identifying microbial taxa by comparing short tags from 16S hypervariable regions against a large database of known 16S genes. Using this technique, hypervariable region tags provide equivalent taxonomy and relative abundances of microbial communities as full-length rRNA sequences. The greater sampling depth afforded by tag pyrosequencing uncovers not only the dominant microbial species, but many more members of the “rare biosphere” than does capillary sequencing of the full-length gene. Tag pyrosequencing greatly enhances projects exploring composition, diversity, and distribution of microbial populations, such as the Human Microbiome Initiative. A companion paper in PLoS Biology (see Dethlefsen et al., doi:10.1371/journal.pbio.0060280) successfully uses this technique to characterize the effects of antibiotics on the human gut microbiota.

Roberta R Fulthorpe,  Flavio Camargo,  Samira Daroub … (2007)
Estimates of the number of species of bacteria per gram of soil vary between 2000 and 8.3 million (Gans et al., 2005; Schloss and Handelsman, 2006). The highest estimate suggests that the number may be so large as to be impractical to test by amplification and sequencing of the highly conserved 16S rRNA gene from soil DNA (Gans et al., 2005). Here we present the use of high throughput DNA pyrosequencing and statistical inference to assess bacterial diversity in four soils across a large transect of the western hemisphere. The number of bacterial 16S rRNA sequences obtained from each site varied from 26,140 to 53,533. The most abundant bacterial groups in all four soils were the Bacteroidetes, Betaproteobacteria and Alphaproteobacteria. Using three estimators of diversity, the maximum number of unique sequences (operational taxonomic units roughly corresponding to the species level) never exceeded 52,000 in these soils at the lowest level of dissimilarity. Furthermore, the bacterial diversity of the forest soil was phylum rich compared to the agricultural soils, which are species rich but phylum poor. The forest site also showed far less diversity of the Archaea with only 0.009% of all sequences from that site being from this group as opposed to 4%-12% of the sequences from the three agricultural sites. This work is the most comprehensive examination to date of bacterial diversity in soil and suggests that agricultural management of soil may significantly influence the diversity of bacteria and archaea.