Principles of the prolactin/vasoinhibin axis 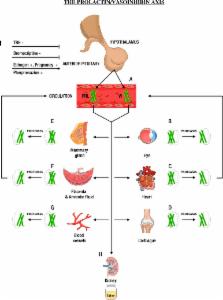 The hormonal family of vasoinhibins, which derive from the anterior pituitary hormone prolactin, are known for their inhibiting effects on blood vessel growth, vasopermeability, and vasodilation. As pleiotropic hormones, vasoinhibins act in multiple target organs and tissues. The generation, secretion, and regulation of vasoinhibins are embedded into the organizational principle of an axis, which integrates the hypothalamus, the pituitary, and the target tissue microenvironment. This axis is designated as the prolactin/vasoinhibin axis. Disturbances of the prolactin/vasoinhibin axis are associated with the pathogenesis of retinal and cardiac diseases and with diseases occurring during pregnancy. New phylogenetical, physiological, and clinical implications are discussed.

C Bole-Feysot, V Goffin, M Edery … (1998)
PRL is an anterior pituitary hormone that, along with GH and PLs, forms a family of hormones that probably resulted from the duplication of an ancestral gene. The PRLR is also a member of a larger family, known as the cytokine class-1 receptor superfamily, which currently has more than 20 different members. PRLRs or binding sites are widely distributed throughout the body. In fact, it is difficult to find a tissue that does not express any PRLR mRNA or protein. In agreement with this wide distribution of receptors is the fact that now more than 300 separate actions of PRL have been reported in various vertebrates, including effects on water and salt balance, growth and development, endocrinology and metabolism, brain and behavior, reproduction, and immune regulation and protection. Clearly, a large proportion of these actions are directly or indirectly associated with the process of reproduction, including many behavioral effects. PRL is also becoming well known as an important regulator of immune function. A number of disease states, including the growth of different forms of cancer as well as various autoimmune diseases, appear to be related to an overproduction of PRL, which may act in an endocrine, autocrine, or paracrine manner, or via an increased sensitivity to the hormone. The first step in the mechanism of action of PRL is the binding to a cell surface receptor. The ligand binds in a two-step process in which site 1 on PRL binds to one receptor molecule, after which a second receptor molecule binds to site 2 on the hormone, forming a homodimer consisting of one molecule of PRL and two molecules of receptor. The PRLR contains no intrinsic tyrosine kinase cytoplasmic domain but associates with a cytoplasmic tyrosine kinase, JAK2. Dimerization of the receptor induces tyrosine phosphorylation and activation of the JAK kinase followed by phosphorylation of the receptor. Other receptor-associated kinases of the Src family have also been shown to be activated by PRL. One major pathway of signaling involves phosphorylation of cytoplasmic State proteins, which themselves dimerize and translocate to nucleus and bind to specific promoter elements on PRL-responsive genes. In addition, the Ras/Raf/MAP kinase pathway is also activated by PRL and may be involved in the proliferative effects of the hormone. Finally, a number of other potential mediators have been identified, including IRS-1, PI-3 kinase, SHP-2, PLC gamma, PKC, and intracellular Ca2+. The technique of gene targeting in mice has been used to develop the first experimental model in which the effect of the complete absence of any lactogen or PRL-mediated effects can be studied. Heterozygous (+/-) females show almost complete failure to lactate after the first, but not subsequent, pregnancies. Homozygous (-/-) females are infertile due to multiple reproductive abnormalities, including ovulation of premeiotic oocytes, reduced fertilization of oocytes, reduced preimplantation oocyte development, lack of embryo implantation, and the absence of pseudopregnancy. Twenty per cent of the homozygous males showed delayed fertility. Other phenotypes, including effects on the immune system and bone, are currently being examined. It is clear that there are multiple actions associated with PRL. It will be important to correlate known effects with local production of PRL to differentiate classic endocrine from autocrine/paracrine effects. The fact that extrapituitary PRL can, under some circumstances, compensate for pituitary PRL raises the interesting possibility that there may be effects of PRL other than those originally observed in hypophysectomized rats. The PRLR knockout mouse model should be an interesting system by which to look for effects activated only by PRL or other lactogenic hormones. On the other hand, many of the effects reported in this review may be shared with other hormones, cytokines, or growth factors and thus will be more difficult to study. (ABSTRACT TRUNCATED)

Gp130 and the interleukin-6 family of cytokines.

T Taga, T. Kishimoto (1997)
Receptors for most interleukins and cytokines that regulate immune and hematopoietic systems belong to the class I cytokine receptor family. These molecules form multichain receptor complexes in order to exhibit high-affinity binding to, and mediate biological functions of, their respective cytokines. In most cases, these functional receptor complexes share common signal transducing receptor components that are also in the class I cytokine receptor family, i.e. gp130, common beta, and common gamma molecules. Interleukin-6 and related cytokines, interleukin-11, leukemia inhibitory factor, oncostatin M, ciliary neurotrophic factor, and cardiotrophin-1 are all pleiotropic and exhibit overlapping biological functions. Functional receptor complexes for this interleukin-6 family of cytokines share gp130 as a component critical for signal transduction. Unlike cytokines sharing common beta and common gamma chains that mainly function in hematopoietic and lymphoid cell systems, the interleukin-6 family of cytokines function extensively outside these systems as well, e.g. from the cardiovascular to the nervous system, owing to ubiquitously expressed gp130. Stimulation of cells with the interleukin-6 family of cytokines triggers homo- or hetero-dimerization of gp130. Although gp130 and its dimer partners possess no intrinsic tyrosine kinase domain, the dimerization of gp130 leads to activation of associated cytoplasmic tyrosine kinases and subsequent modification of transcription factors. This paper reviews recent progress in the study of the interleukin-6 family of cytokines and gp130.

MicroRNA-146a is a therapeutic target and biomarker for peripartum cardiomyopathy.

Ngoc-Quynh-Nhu Nguyen, Agnes Noel, Marc Thiry … (2013)
Peripartum cardiomyopathy (PPCM) is a life-threatening pregnancy-associated cardiomyopathy in previously healthy women. Although PPCM is driven in part by the 16-kDa N-terminal prolactin fragment (16K PRL), the underlying molecular mechanisms are poorly understood. We found that 16K PRL induced microRNA-146a (miR-146a) expression in ECs, which attenuated angiogenesis through downregulation of NRAS. 16K PRL stimulated the release of miR-146a-loaded exosomes from ECs. The exosomes were absorbed by cardiomyocytes, increasing miR-146a levels, which resulted in a subsequent decrease in metabolic activity and decreased expression of Erbb4, Notch1, and Irak1. Mice with cardiomyocyte-restricted Stat3 knockout (CKO mice) exhibited a PPCM-like phenotype and displayed increased cardiac miR-146a expression with coincident downregulation of Erbb4, Nras, Notch1, and Irak1. Blocking miR-146a with locked nucleic acids or antago-miRs attenuated PPCM in CKO mice without interrupting full-length prolactin signaling, as indicated by normal nursing activities. Finally, miR-146a was elevated in the plasma and hearts of PPCM patients, but not in patients with dilated cardiomyopathy. These results demonstrate that miR-146a is a downstream-mediator of 16K PRL that could potentially serve as a biomarker and therapeutic target for PPCM.