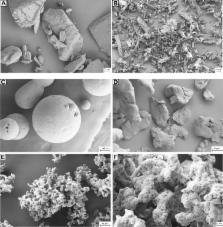 This research aimed to develop a supercritical fluid (SCF) technique for preparing a particulate form of itraconazole (ITZ) with good dissolution and bioavailability characteristics. The ITZ particulate solid dispersion was formulated with hydroxypropyl methylcellulose, Pluronic F-127, and L-ascorbic acid. Aggregated particles showed porous structure when examined by scanning electron microscopy. Powder X-ray diffraction and Fourier transform infrared spectra indicated an interaction between ITZ and excipients and showed that ITZ existed in an amorphous state in the composite solid dispersion particles. The solid dispersion obtained by the SCF process improved the dissolution of ITZ in media of pH 1.0, pH 4.5, and pH 6.8, compared with a commercial product (Sporanox ®), which could be ascribed to the porous aggregated particle shape and amorphous solid state of ITZ. While the solid dispersion did not show a statistical improvement ( P=0.50) in terms of oral bioavailability of ITZ compared with Sporanox ®, the C max (the maximum plasma concentration of ITZ in a pharmacokinetic curve) of ITZ was raised significantly ( P=0.03) after oral administration. Thus, the SCF process has been shown to be an efficient, single step process to form ITZ-containing solid dispersion particles with good dissolution and oral bioavailability characteristics.

Characterization of the interaction of 2-hydroxypropyl-beta-cyclodextrin with itraconazole at pH 2, 4, and 7.

Jef R. Peeters,  Peter Neeskens,  Jan Tollenaere … (2002)
Phase-solubility techniques were used to assess the effect of pH on itraconazole complexation with 2-hydroxypropyl-beta-cyclodextrin (HPbetaCD). In addition, molecular modeling using beta-cyclodextrin as a surrogate for HPbetaCD was completed. Data suggested A(p)-type solubility relationships, indicating higher order complexation at higher HPbetaCD concentrations. Stability constants were derived from the solubility isotherms using a simplex optimization procedure. At pH 2 (2 units below the pK(a4)), a 1:2 complex formation was observed, whereas at pH 4 (i.e., the pK(a4) for itraconazole) and at pH 7, 1:3 complexation occurred. The lower order of complexation observed at lower pH may be related to substructure protonation which reduced HPbetaCD interaction. Molecular mechanics also suggest 1:3 complex formation for the neutral species, indicating that possible interaction sites may include (in order of binding) triazole > 1,4-diaminophenyl > 2-butyl approximate, equals piperazine. Copyright 2002 Wiley-Liss, Inc.

Itraconazole: an update on pharmacology and clinical use for treatment of invasive and allergic fungal infections.

W. W. Hope,  Jodi Lestner (2013)
Fungal infections are a major source of global morbidity and mortality. Itraconazole is a triazole antifungal agent that is widely used for the prevention and treatment of fungal infection. While newer antifungal agents are now available, itraconazole is an orally bioavailable agent with broad-spectrum antifungal activity. Itraconazole remains a useful drug for the management of allergic and invasive mycoses worldwide. This article provides a summary of the pharmacokinetics, pharmacodynamics and clinical uses of itraconazole. Additionally, the authors summarise the safety and recently described toxicodynamics and discuss the value of therapeutic drug monitoring (TDM) with itraconazole. The following search criteria were constructed in order to identify relevant literature using PubMed and Ovid-MEDLINE: itraconazole, triazole, pharmacokinetics, pharmacodynamics, toxicodynamics and TDM. Relevant abstracts and articles identified from reviewing secondary citations were additionally retrieved and included if relevant. Itraconazole remains an important agent in the prevention and treatment of fungal infection. Itraconazole has a broad-spectrum of activity and is available in both an intravenous and oral form making long-term use in chronic mycoses practical. Itraconazole is widely used for the treatment of endemic fungal infections. Pharmacokinetic variability and clinically important drug interactions make TDM of itraconazole an important consideration.