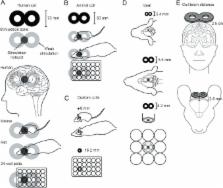 Gaby Pell,  Yiftach Roth,  Abraham Zangen (2010)
Transcranial magnetic stimulation (TMS) is a non-invasive brain stimulation technique that activates neurons via generation of brief pulses of high-intensity magnetic field. If these pulses are applied in a repetitive fashion (rTMS), persistent modulation of neural excitability can be achieved. The technique has proved beneficial in the treatment of a number of neurological and psychiatric conditions. However, the effect of rTMS on excitability and the other performance indicators shows a considerable degree of variability across different sessions and subjects. The frequency of stimulation has always been considered as the main determinant of the direction of excitability modulation. However, interactions exist between frequency and several other stimulation parameters that also influence the degree of modulation. In addition, the spatial interaction of the transient electric field induced by the TMS pulse with the cortical neurons is another contributor to variability. Consideration of all of these factors is necessary in order to improve the consistency of the conditioning effect and to better understand the outcomes of investigations with rTMS. These user-controlled sources of variability are discussed against the background of the mechanisms that are believed to drive the excitability changes. The mechanism behind synaptic plasticity is commonly accepted as the driver of sustained excitability modulation for rTMS and indeed, plasticity and rTMS share many characteristics, but definitive evidence is lacking for this. It is more likely that there is a multiplicity of mechanisms behind the action of rTMS. The different mechanisms interact with each other and this will contribute to the variability of rTMS-induced excitability changes. This review investigates the links between rTMS and synaptic plasticity, describes their similarities and differences, and highlights a neglected contribution of the membrane potential. In summary, the principal aims of this review are (i) to discuss the different experimental and subject-related factors that contribute to the variability of excitability modulation induced by rTMS, and (ii) to discuss a generalized underlying mechanism for the excitability modulation. Copyright © 2010 Elsevier Ltd. All rights reserved.

Florian Müller-Dahlhaus,  Andreas Vlachos,  Thomas Deller … (2012)
Repetitive transcranial magnetic stimulation (rTMS) is a noninvasive brain stimulation technique that can alter cortical excitability in human subjects for hours beyond the stimulation period. It thus has potential as a therapeutic tool in neuropsychiatric disorders associated with alterations in cortical excitability. However, rTMS-induced neural plasticity remains insufficiently understood at the cellular level. To learn more about the effects of repetitive magnetic stimulation (rMS), we established an in vitro model of rMS using mouse organotypic entorhino-hippocampal slice cultures. We assessed the outcome of a high-frequency (10 Hz) rMS protocol on functional and structural properties of excitatory synapses in mature hippocampal CA1 pyramidal neurons. Whole-cell patch-clamp recordings, immunohistochemistry, and time-lapse imaging techniques revealed that rMS induces a long-lasting increase in glutamatergic synaptic strength, which is accompanied by structural remodeling of dendritic spines. The effects of rMS on spine size were predominantly seen in small spines, suggesting differential effects of rMS on subpopulations of spines. Furthermore, our data indicate that rMS-induced postsynaptic changes depend on the NMDA receptor-mediated accumulation of GluA1-containing AMPA receptors. These results provide first experimental evidence that rMS induces coordinated functional and structural plasticity of excitatory postsynapses, which is consistent with a long-term potentiation of synaptic transmission.