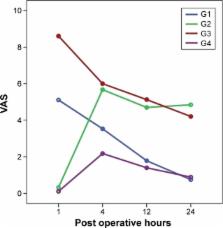 Mesh placement is the main standard in repair of inguinal hernia, and laparoscopic repair is the standard of care via spinal, epidural, or combined anesthesia. Here, we compared open and laparoscopic total extraperitoneal (TEP) repairs under general (GA) and spinal anesthesia (SA).

Laparoscopic TEP hernia repair is a safe and effective method along with its advantages of shorter hospital stay, less recurrence, less postoperative pain, higher patient satisfaction, and similar postoperative complication rates. SA has the disadvantage of higher incidence of headache and urinary retention compared to GA.

James Gibbs,  O. Jonasson,   … (2004)
Repair of inguinal hernias in men is a common surgical procedure, but the most effective surgical technique is unknown. We randomly assigned men with inguinal hernias at 14 Veterans Affairs (VA) medical centers to either open mesh or laparoscopic mesh repair. The primary outcome was recurrence of hernias at two years. Secondary outcomes included complications and patient-centered outcomes. Of the 2164 patients who were randomly assigned to one of the two procedures, 1983 underwent an operation; two-year follow-up was completed in 1696 (85.5 percent). Recurrences were more common in the laparoscopic group (87 of 862 patients [10.1 percent]) than in the open group (41 of 834 patients [4.9 percent]; odds ratio, 2.2; 95 percent confidence interval, 1.5 to 3.2). The rate of complications was higher in the laparoscopic-surgery group than in the open-surgery group (39.0 percent vs. 33.4 percent; adjusted odds ratio, 1.3; 95 percent confidence interval, 1.1 to 1.6). The laparoscopic-surgery group had less pain initially than the open-surgery group on the day of surgery (difference in mean score on a visual-analogue scale, 10.2 mm; 95 percent confidence interval, 4.8 to 15.6) and at two weeks (6.1 mm; 95 percent confidence interval, 1.7 to 10.5) and returned to normal activities one day earlier (adjusted hazard ratio for a shorter time to return to normal activities, 1.2; 95 percent confidence interval, 1.1 to 1.3). In prespecified analyses, there was a significant interaction between the surgical approach (open or laparoscopic) and the type of hernia (primary or recurrent) (P=0.012). Recurrence was significantly more common after laparoscopic repair than after open repair of primary hernias (10.1 percent vs. 4.0 percent), but rates of recurrence after repair of recurrent hernias were similar in the two groups (10.0 percent and 14.1 percent, respectively). The open technique is superior to the laparoscopic technique for mesh repair of primary hernias. Copyright 2004 Massachusetts Medical Society

Matthew Cooper,  Charles Abrams,  Shermeen B Memon … (2003)
The aim was to conduct a meta-analysis of the randomized evidence to determine the relative merits of laparoscopic (LIHR) and open (OIHR) inguinal hernia repair. A search of the Medline, Embase, Science Citation Index, Current Contents and PubMed databases identified all randomized clinical trials that compared OIHR and LIHR and were published in the English language between January 1990 and the end of October 2000. The meta-analysis was prepared in accordance with the Quality of Reporting of Meta-analyses (QUOROM) statement. The six outcome variables analysed were operating time, time to discharge from hospital, return to normal activity and return to work, postoperative complications and recurrence rate. Random effects meta-analyses were performed using odds ratios and weighted mean differences. Twenty-nine trials were considered suitable for meta-analysis. Some 3017 hernias were repaired laparoscopically and 2972 hernias were repaired using an open method in 5588 patients. For four of the six outcomes the summary point estimates favoured LIHR over OIHR; there was a significant reduction of 38 per cent in the relative odds of postoperative complications (odds ratio 0.62 (95 per cent confidence interval (c.i.) 0.46 to 0.84); P = 0.002), 4.73 (95 per cent c.i. 3.51 to 5.96) days in time to return to normal activity (P < 0.001), 6.96 (95 per cent c.i. 5.34 to 8.58) days in time to return to work (P < 0.001) and 3.43 (95 per cent c.i. 0.35 to 6.50) h in time to discharge from hospital (P = 0.029). There was a significant increase of 15.20 (95 per cent c.i. 7.78 to 22.63) min in the mean operating time for LIHR (P < 0.001). The relative odds of short-term recurrence were increased by 50 per cent for LIHR compared with OIHR, although this result was not statistically significant (odds ratio 1.51 (95 per cent c.i. 0.81 to 2.79); P = 0.194). LIHR was associated with earlier discharge from hospital, quicker return to normal activity and work, and significantly fewer postoperative complications than OIHR. However, the operating time was significantly longer and there was a trend towards an increase in the relative odds of recurrence after laparoscopic repair. Copyright 2003 British Journal of Surgery Society Ltd. Published by John Wiley & Sons, Ltd.

S Rajeshwari,  Subodh Kumar,  Asuri Krishna … (2012)
Minimal access approaches to inguinal hernia repair have added to the ongoing debate over the "best groin hernia repair." The present prospective randomized controlled trial was done to compare the totally extraperitoneal (TEP) and transabdominal preperitoneal (TAPP) techniques of laparoscopic inguinal hernia repair. The present prospective randomized study was conducted between May 2007 and March, 2009 and included 100 patients suffering from uncomplicated primary groin hernia. Patients were randomized into group I (TEP) and group II (TAPP). Intraoperative variables and postoperative pain scores were recorded in a prestructured form. One hundred patients were included in the study (TEP, 53; TAPP, 47). Both groups were comparable in terms of demographic profile and hernia characteristics. The average operative time was higher in the TAPP group (p = 0.209). The pain scores at 1 h and 24 h after surgery and at 3-month follow-up were significantly higher in the TAPP group (p < 0.05). The average follow-up was 30.5 months. In the TEP group, 37.8% of patients had seroma compared to 18.3% in the TAPP group (p = 0.021). However, there was a higher incidence of scrotal edema in the TAPP group (16 vs. 9, p = 0.009). The wound infection rates were equal (2% vs. 3%). There has been no recurrence in either group during the follow-up period of 44 months. Overall, the patients were more satisfied with TEP rather than TAPP (p < 0.05). In the present study, TEP had a significant advantage over TAPP for significantly reduced postoperative pain up to 3 months, which resulted in a better patient satisfaction score. The other intraoperative complications, postoperative complications, and cost were similar in both groups. In terms of results, both repair techniques seemed equally effective, but TEP had an edge over TAPP.