The First Korean Case of High-Molecular-Weight Kininogen Deficiency, With a Novel Variant, c.488delG, in the KNG1 Gene 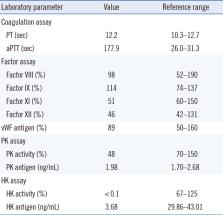 ScienceOpenPublisherPMC
Bookmark
There is no author summary for this article yet. Authors can add summaries to their articles on ScienceOpen to make them more accessible to a non-specialist audience.
Dear Editor, High-molecular-weight kininogen (HK) circulates bound to prekallikrein(PK), which can bind to negatively charged phospholipids.It is a non-enzymatic cofactor for kallikrein binding to negativelycharged phospholipids. Kallikrein activates factor XII, which then activates factor XI, leading to activation of the intrinsic coagulationpathway [1]. Deficiencies in HK and PK can cause isolated activated partialthromboplastin time (aPTT) prolongation with normal levels of intrinsic coagulation factors (VIII, IX, XI, and XII). In PK deficiency,pre-incubation of patient plasma with an aPTT reagent before aPTT assay shortens the aPTT, whereas in HK deficiency, such pre-incubation does not correct aPTT prolongation [2]. Severalcases of HK deficiency have been reported in the Japanese population [3]. Herein we report the first Korean case of congenitalHK deficiency that resulted in a prolonged aPTT without a change in the pre-incubation aPTT assay. HK deficiency was confirmed by plasma HK levels and identification of two pathogenicvariants, one of which was novel (c.488delG). This study was approved by the institutional review board (IRB) of Seoul National University Hospital (IRB 1911-116-1080). Informed consent for performing genetic testing along with additional coagulationassays was obtained from the patient. A 37-year-old man visited the CHA Bundang Medical Center, Seongnam, Korea, for lipoma surgery. He underwent preoperativeassessment, including coagulation assays, during which aPTT prolongation was found. He had suffered from peptic ulcerbleeding in his twenties and had no other medical history related to bleeding or thrombosis. The patient's peripheral blood specimen was sent to the Seoul National University Hospital (SNUH), Seoul, Korea for further analysis. The results of laboratoryworkup performed in SNUH are presented in Table 1: Prothrombintime (PT) and aPTT before preincubation were 12.2 and 177.9 s, respectively. Prolonged aPTT was corrected after a mixing study. Factors VIII, IX, and XII were within normal ranges, whereas factor XI was slightly decreased (Table 1). To exclude immunologic causes of aPTT prolongation, lupus anticoagulant, anti-cardiolipin antibody, anti-β2GPI antibody, and anti-nuclear antibody were tested, which all turned out to be negative.Under suspicion of PK deficiency, aPTT was measured after preincubation with an aPTT reagent for 20 minutes. However,aPTT shortening was not observed: the re-tested aPTT was 169.7 seconds, and after preincubation it was 132 seconds. PK activity was of borderline deficiency and PK antigen level was within the reference range. Sanger sequencing of the KLKB1 gene revealed a normal sequence. On the other hand, HK activitywas below the detection limit, and HK antigen was very low (Table 1). Sanger sequencing of the KNG1 gene (exons 1–11 and the flanking regions; NM_000893) revealed compound heterozygous variants c.488delG and c.1165C>T. A novel variant, c.488delG in exon 4, which resulted in a frameshift mutation (p.Gly163-Alafs*20), was assessed as a pathogenic variant based on the 2015 American College of Medical Genetics and Genomics and the Association for Molecular Pathology guidelines: PVS1 (a frameshiftvariant that leads to a truncated protein), PM2 (absent from controls in the Exome Aggregation Consortium and Genome AggregationDatabase), and PP4 (highly specific patient phenotype) [4]. A nonsense mutation caused by c.1165C>T generates a premature stop codon at position 389 (p.Arg389*). The same variant has been reported in a patient with severe HK deficiency [5]. Thus, our patient was confirmed as having HK deficiency with compound heterozygous KNG1 variants. We could not performa family study because the patient was lost to follow up. In HK deficiency, PK activity and factor XI have been reported to be decreased or normal [3 6]. In our case, PK activity was low, which was measured by the clotting method, and factor XI was reduced. Both PK and factor XI circulate bound to HK, which explains the decreased levels of PK and factor XI in our patient. Patients with HK deficiency are mostly asymptomatic, with prolonged aPTT. Despite their role in triggering the coagulation pathway, deficiency in any contact activation system components, including HK, does not lead to bleeding [1]. A few cases of HK deficiency with thrombosis have been reported: left vertebral basilar artery thromboses, deep vein thrombosis with pulmonary embolism, and splenic infarction [3 7 8]. However, the associationbetween HK deficiency and thrombosis has not been clarified.Deletion of murine kininogen gene 1 (mKng1) delayed thrombosisin an arterial injury model [9]. A recent study using a murinemodel revealed that HK deficiency protects mice from ischemicneurodegeneration [10]. In our case, the patient did not have any thrombosis-related medical history. Because of conflictingresults and limited data on the relationship between HK deficiency and thrombosis, we suggest that in cases of HK deficiencywith thrombosis, other causes of thrombosis should be thoroughly investigated to clarify whether the finding is coincidental,and thrombosis formation should be closely followed up.

Martin Bendszus, Friederike Langhauser, Mirko Pham … (2012)
Thrombosis and inflammation are hallmarks of ischemic stroke still unamenable to therapeutic interventions. High-molecular-weight kininogen (KNG) is a central constituent of the contact-kinin system which represents an interface between thrombotic and inflammatory circuits and is critically involved in stroke development. Kng(-/-) mice are protected from thrombosis after artificial vessel wall injury and lack the proinflammatory mediator bradykinin. We investigated the consequences of KNG deficiency in models of ischemic stroke. Kng(-/-) mice of either sex subjected to transient middle cerebral artery occlusion developed dramatically smaller brain infarctions and less severe neurologic deficits without an increase in infarct-associated hemorrhage. This protective effect was preserved at later stages of infarction as well as in elderly mice. Targeting KNG reduced thrombus formation in ischemic vessels and improved cerebral blood flow, and reconstitution of KNG-deficient mice with human KNG or bradykinin restored clot deposition and infarct susceptibility. Moreover, mice deficient in KNG showed less severe blood-brain barrier damage and edema formation, and the local inflammatory response was reduced compared with controls. Because KNG appears to be instrumental in pathologic thrombus formation and inflammation but dispensable for hemostasis, KNG inhibition may offer a selective and safe strategy for combating stroke and other thromboembolic diseases.

V. Barnes, Yihua Zhou, Xincheng Lu … (2008)
High-molecular-weight kininogen (HK) plays an important role in the assembly of the plasma kallikrein-kinin system. While the human genome contains a single copy of the kininogen gene, 3 copies exist in the rat (1 encoding K-kininogen and 2 encoding T-kininogen). Here, we confirm that the mouse genome contains 2 homologous kininogen genes, mKng1 and mKng2, and demonstrate that these genes are expressed in a tissue-specific manner. To determine the roles of these genes in murine development and physiology, we disrupted mKng1, which is expressed primarily in the liver. mKng1(-/-) mice were viable, but lacked plasma HK and low-molecular-weight kininogen (LK), as well as DeltamHK-D5, a novel kininogen isoform that lacks kininogen domain 5. Moreover, despite normal tail vein bleeding times, mKng1(-/-) mice displayed a significantly prolonged time to carotid artery occlusion following Rose Bengal administration and laser-induced arterial injury. These results suggest that a single gene, mKng1, is responsible for production of plasma kininogen, and that plasma HK contributes to induced arterial thrombosis in mice.

Prekallikrein deficiency: the characteristic normalization of the severely prolonged aPTT following increased preincubation time is due to autoactivation of factor XII.