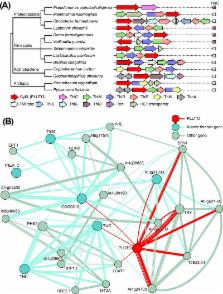 In plants, the hydroxymethylpyrimidine (HMP) and thiazole precursors of thiamin are synthesized and coupled together to form thiamin in plastids. Mutants unable to form HMP can be rescued by exogenous HMP, implying the presence of HMP transporters in the plasma membrane and plastids. Analysis of bacterial genomes revealed a transporter gene that is chromosomally clustered with thiamin biosynthesis and salvage genes. Its closest Arabidopsis homolog, the plastidic nucleobase transporter (PLUTO), is co-expressed with several thiamin biosynthetic enzymes. Heterologous expression of PLUTO in Escherichia coli or Saccharomyces cerevisiae increased sensitivity to a toxic HMP analog, and disrupting PLUTO in an HMP-requiring Arabidopsis line reduced root growth at low HMP concentrations. These data implicate PLUTO in plastidial transport and salvage of HMP.

Ross Overbeek,  Tadhg Begley,  Ralph Butler … (2005)
The release of the 1000th complete microbial genome will occur in the next two to three years. In anticipation of this milestone, the Fellowship for Interpretation of Genomes (FIG) launched the Project to Annotate 1000 Genomes. The project is built around the principle that the key to improved accuracy in high-throughput annotation technology is to have experts annotate single subsystems over the complete collection of genomes, rather than having an annotation expert attempt to annotate all of the genes in a single genome. Using the subsystems approach, all of the genes implementing the subsystem are analyzed by an expert in that subsystem. An annotation environment was created where populated subsystems are curated and projected to new genomes. A portable notion of a populated subsystem was defined, and tools developed for exchanging and curating these objects. Tools were also developed to resolve conflicts between populated subsystems. The SEED is the first annotation environment that supports this model of annotation. Here, we describe the subsystem approach, and offer the first release of our growing library of populated subsystems. The initial release of data includes 180 177 distinct proteins with 2133 distinct functional roles. This data comes from 173 subsystems and 383 different organisms.