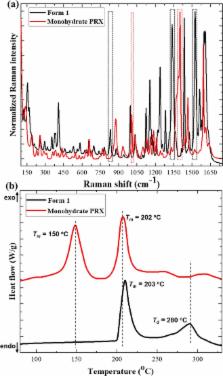 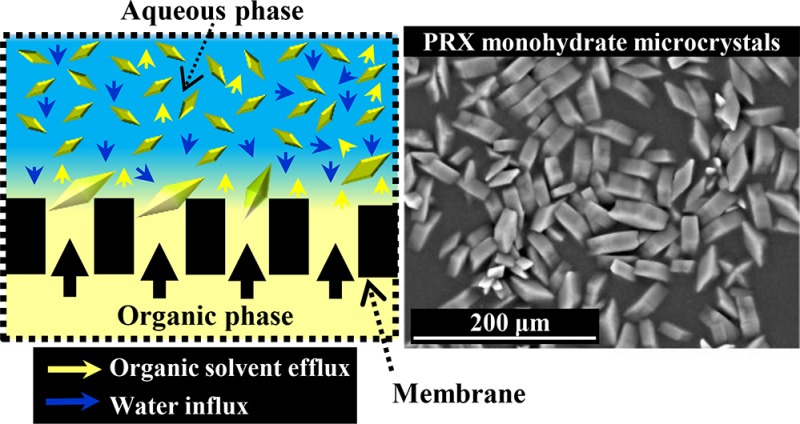 Microcrystals of piroxicam (PRX) monohydrate with a narrow size distribution were prepared from acetone/PRX solutions by antisolvent crystallization via metallic membranes with ordered pore arrays. Crystallization was achieved by controlled addition of the feed solution through the membrane pores into a well-stirred antisolvent. A complete transformation of an anhydrous form I into a monohydrate form of PRX was confirmed by Raman spectroscopy and differential scanning calorimetry. The size of the crystals was 7–34 μm and was controlled by the PRX concentration in the feed solution (15–25 g L –1), antisolvent/solvent volume ratio (5–30), and type of antisolvent (Milli-Q water or 0.1–0.5 wt % aqueous solutions of hydroxypropyl methyl cellulose (HPMC), poly(vinyl alcohol) or Pluronic P-123). The smallest crystals were obtained by injecting 25 g L –1 PRX solution through a stainless-steel membrane with a pore size of 10 μm into a 0.06 wt % HPMC solution stirred at 1500 rpm using an antisolvent/solvent ratio of 20. HPMC provided better steric stabilization of microcrystals against agglomeration than poly(vinyl alcohol) and Pluronic P-123, due to hydrogen bonding interactions with PRX and water. A continuous production of large PRX monohydrate microcrystals with a volume-weighted mean diameter above 75 μm was achieved in a continuous stirred membrane crystallizer. Rapid pouring of Milli-Q water into the feed solution resulted in a mixture of highly polydispersed prism-shaped and needle-shaped crystals.

Piroxicam monohydrate microcrystals with an average size of 7−34 μm and monomodal size distribution were prepared by membrane antisolvent crystallization. Piroxicam precipitated in the cubic form by controlled addition of a piroxicam/acetone solution through the pores of microfabricated metallic membranes into a well-stirred antisolvent (water or aqueous surfactant solution). The most efficient surfactant was 0.06 wt % hydroxypropyl methyl cellulose.

Gordon L. Amidon,  R Löbenberg (2000)
In the last decade, the regulatory bioequivalence (BE) requirements of drug products have undergone major changes. The introduction of the biopharmaceutics drug classification system (BCS) into the guidelines of the Food and Drug Administration (FDA) is a major step forward to classify the biopharmaceutical properties of drugs and drug products. Based on mechanistic approaches to the drug absorption and dissolution processes, the BCS enables the regulatory bodies to simplify and improve the drug approval process. The knowledge of the BCS characteristics of a drug in a formulation can also be utilized by the formulation scientist to develop a more optimized dosage form based on fundamental mechanistic, rather than empirical, information. This report gives a brief overview of the BCS and its implications.

Norbert Rasenack,  Helge Hartenhauer,  Bernd W Müller (2003)
Slight dissolution rates related to poor water-solubility are one of the well-known difficulties to be covered during the development of new drug substances. The poorly water-soluble drug ECU-01, a low molecular enzyme-inhibitor with anti-inflammatory properties for oral administration, shows a poor dissolution rate. This study is intended to enhance the drug dissolution rate by using microcrystals. The common way for micronization is the milling of previously formed larger crystals. However, milling shows several disadvantages as the newly created surfaces are thermodynamically activated due to the high energy input and not naturally grown. In this study microcrystals were not produced using any cutting up techniques, but only by association. Naturally grown microcrystals were prepared by a precipitation method in the presence of stabilizing agents (e.g. gelatin, chitosan, different types of cellulose ethers) followed by spray-drying of the formed dispersion. First the drug was dissolved in acetone and then precipitated by rapid pouring an aqueous solution of the stabilizer into the drug solution. Particularly, cellulose ethers were able to form stable and homogeneous dispersions of microcrystals (mean particle size = 1 microm) showing a tight particle size distribution. By spray-drying, the drug powder was obtained. The dissolution rate is significantly enhanced (common drug: 4% after 20 min/microcrystals 93% after 20 min) due to the large surface, which is hydrophilized by adsorbed stabilizers as shown by the decreased contact angle (65 and 30 degrees, respectively). Copyright 2003 Elsevier Science B.V.