Occurrence of fish species in the inland water of Murmansk Region (Russia): research in 1972-2021 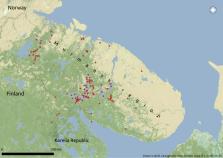 Knowledge about the distribution of organisms on Earth is important backbone of biological sciences and especially for deeper understanding of biogeography. However, much of the existing distributional data are scattered throughout a multitude of sources (including in different languages), such as taxonomic publications, checklists and natural history collections and often, bringing them together is difficult. Development of the digital storage facilities may prevent loss of important data ( Ruchin et al. 2020). Project GBIF is a good example of a successful data storage facility, which allows investigators to publish biodiversity data in one safe place in one uniform format. Our dataset describes the degree of the investigation of the fish fauna of the inland water of the Murmansk Region. Murmansk Region is a Euro-Arctic Region with a heterogeneous landscape, which determines diversity of the habitats for the fish occurrence. Our dataset contains valid information about distribution of the fish species. This dataset was built upon information obtained by the members of a Laboratory of the aquatic ecosystems of the Institute of North Industrial Ecology Problems of Kola Science Center of the Russian Academy of Science (INEP KSC RAS). The dataset includes 18,509 records about 16 fish species from 14 genera (eight families) collected from 1972 to 2021. A total of 67 water bodies from 15 different basins (rivers from basins of the White and Barents Seas) was screened in order to characterise ichthyocenoses. The main purpose of publishing a database is to make our data available in the global biodiversity system to a wide range of users. The data can be used by researchers, as well as helping the authorities to manage their territory more efficiently.

All occurrences are published in GBIF for the first time. We would like to make this data available to everyone by adding it in the global biodiversity database (GBIF).

John Wieczorek,  David Bloom,  Robert Guralnick … (2012)
Biodiversity data derive from myriad sources stored in various formats on many distinct hardware and software platforms. An essential step towards understanding global patterns of biodiversity is to provide a standardized view of these heterogeneous data sources to improve interoperability. Fundamental to this advance are definitions of common terms. This paper describes the evolution and development of Darwin Core, a data standard for publishing and integrating biodiversity information. We focus on the categories of terms that define the standard, differences between simple and relational Darwin Core, how the standard has been implemented, and the community processes that are essential for maintenance and growth of the standard. We present case-study extensions of the Darwin Core into new research communities, including metagenomics and genetic resources. We close by showing how Darwin Core records are integrated to create new knowledge products documenting species distributions and changes due to environmental perturbations.

Elena M. Zubova,  Nikolay Kashulin,  Vladimir Dauvalter … (2020)
Lake Kuetsjarvi (in the lower reaches of the Pasvik River, Murmansk Region, Russia) in the border area between Russia and Norway, is one of the most polluted water reservoirs in the European Arctic. The operation of the Pechenganikel Smelter located on its shores has led to the extremely high concentrations of heavy metals observed in the waters and sediments of the lake. Long-term comprehensive studies of the ecosystem of Lake Kuetsjarvi have made it possible to identify the response of its components to the global and regional change in the environment and climate as a whole, resulting in increased water toxicity and eutrophication, reduction in the number of stenobiont species of aquatic organisms against the background of an increase in the number of eurybiontic and invasive species. Modern communities of Lake Kuetsjarvi are the result of a combination of long-term changes in the abiotic environment and biotic interactions. Heavy-metal pollution of Lake Kuetsjarvi, observed since the 1930s, has led to the formation of a community that is resistant to this type of impact and supports large populations of adapted species. Adaptations of communities to the dynamics of the environmental conditions that their members are exposed to include changes in the species composition, quantitative indicators, ratios between individual taxonomic groups, and the population structure. The development of sympatric forms that differ in the ecological niches they occupy, morphology, and life cycle strategies, including the transition to a short-cycle survival strategy, allows whitefish to remain the dominant species and maintain high population numbers. Unlike the organismal level, responses to medium-term environmental changes on the population and community level are less specific and characterized by stronger inertia.

Fishes of the World, 4th Edition