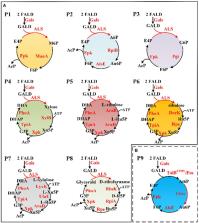 Methylotrophs utilizes cheap, abundant one-carbon compounds, offering a promising green, sustainable and economical alternative to current sugar-based biomanufacturing. However, natural one-carbon assimilation pathways come with many disadvantages, such as complicated reaction steps, the need for additional energy and/or reducing power, or loss of CO 2, resulting in unsatisfactory biomanufacturing performance. Here, we predicted eight simple, novel and carbon-conserving formaldehyde (FALD) assimilation pathways based on the extended metabolic network with non-natural aldol reactions using the comb-flux balance analysis (FBA) algorithm. Three of these pathways were found to be independent of energy/reducing equivalents, and thus chosen for further experimental verification. Then, two novel aldol reactions, condensing D-erythrose 4-phosphate and glycolaldehyde (GALD) into 2 R,3 R-stereo allose 6-phosphate by DeoC or 2 S,3 R-stereo altrose 6-phosphate by TalB F178Y/Fsa, were identified for the first time. Finally, a novel FALD assimilation pathway proceeding via allose 6-phosphate, named as the glycolaldehyde-allose 6-phosphate assimilation (GAPA) pathway, was constructed in vitro with a high carbon yield of 94%. This work provides an elegant paradigm for systematic design of one-carbon assimilation pathways based on artificial aldolase (ALS) reactions, which could also be feasibly adapted for the mining of other metabolic pathways.

Ali Ebrahim,  Joshua A Lerman,  Bernhard Palsson … (2013)
Background COnstraint-Based Reconstruction and Analysis (COBRA) methods are widely used for genome-scale modeling of metabolic networks in both prokaryotes and eukaryotes. Due to the successes with metabolism, there is an increasing effort to apply COBRA methods to reconstruct and analyze integrated models of cellular processes. The COBRA Toolbox for MATLAB is a leading software package for genome-scale analysis of metabolism; however, it was not designed to elegantly capture the complexity inherent in integrated biological networks and lacks an integration framework for the multiomics data used in systems biology. The openCOBRA Project is a community effort to promote constraints-based research through the distribution of freely available software. Results Here, we describe COBRA for Python (COBRApy), a Python package that provides support for basic COBRA methods. COBRApy is designed in an object-oriented fashion that facilitates the representation of the complex biological processes of metabolism and gene expression. COBRApy does not require MATLAB to function; however, it includes an interface to the COBRA Toolbox for MATLAB to facilitate use of legacy codes. For improved performance, COBRApy includes parallel processing support for computationally intensive processes. Conclusion COBRApy is an object-oriented framework designed to meet the computational challenges associated with the next generation of stoichiometric constraint-based models and high-density omics data sets. Availability http://opencobra.sourceforge.net/

The MetaCyc database of metabolic pathways and enzymes

Ron Caspi,  Richard Billington,  Carol Fulcher … (2017)
Abstract MetaCyc (https://MetaCyc.org) is a comprehensive reference database of metabolic pathways and enzymes from all domains of life. It contains more than 2570 pathways derived from >54 000 publications, making it the largest curated collection of metabolic pathways. The data in MetaCyc is strictly evidence-based and richly curated, resulting in an encyclopedic reference tool for metabolism. MetaCyc is also used as a knowledge base for generating thousands of organism-specific Pathway/Genome Databases (PGDBs), which are available in the BioCyc (https://BioCyc.org) and other PGDB collections. This article provides an update on the developments in MetaCyc during the past two years, including the expansion of data and addition of new features.

This article was submitted to Microbiotechnology, a section of the journal Frontiers in Microbiology