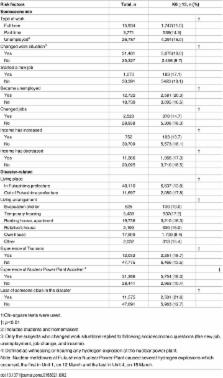 Following the Great East Japan Earthquake on March 11, 2011, the nuclear disaster at the Fukushima Daiichi Nuclear Power Plant has continued to affect the mental health status of residents in the evacuation zone. To examine the mental health status of evacuee after the nuclear accident, we conducted the Mental Health and Lifestyle Survey as part of the ongoing Fukushima Health Management Survey.

We measured mental health status using the Kessler 6-item psychological distress scale (K6) in a total of 73,569 (response rate: 40.7%) evacuees aged 15 and over who lived in the evacuation zone in Fukushima Prefecture. We then dichotomized responders using a 12/13 cutoff on the K6, and compared the proportion of K6 scores ≥13 and ≤12 in each risk factor including demographic information, socioeconomic variables, and disaster-related variables. We also performed bivariate analyses between mental health status and possible risk factors using the chi-square test. Furthermore, we performed multivariate regression analysis using modified Poisson regression models.

The earthquake, tsunami and subsequent nuclear accident likely caused severe psychological distress among residents in the evacuation zone in Fukushima Prefecture. The close association between psychological distress and the radiation levels shows that the nuclear accident seriously influenced the mental health of the residents, which might be exacerbated by increased risk perception. To provide prompt and appropriate support, continued psychosocial intervention for evacuees is strongly recommended.

Trends in mental illness and suicidality after Hurricane Katrina.

K Kessler,  S Wessely,  R Ursano … (2008)
A representative sample of 815 pre-hurricane residents of the areas affected by Hurricane Katrina was interviewed 5-8 months after the hurricane and again 1 year later as the Hurricane Katrina Community Advisory Group (CAG). The follow-up survey was carried out to study patterns-correlates of recovery from hurricane-related post-traumatic stress disorder (PTSD), broader anxiety-mood disorders and suicidality. The Trauma Screening Questionnaire screening scale of PTSD and the K6 screening scale of anxiety-mood disorders were used to generate DSM-IV prevalence estimates. Contrary to results in other disaster studies, where post-disaster mental disorder typically decreases with time, prevalence increased significantly in the CAG for PTSD (20.9 vs 14.9% at baseline), serious mental illness (SMI; 14.0 vs 10.9%), suicidal ideation (6.4 vs 2.8%) and suicide plans (2.5 vs 1.0%). The increases in PTSD-SMI were confined to respondents not from the New Orleans Metropolitan Area, while the increases in suicidal ideation-plans occurred both in the New Orleans sub-sample and in the remainder of the sample. Unresolved hurricane-related stresses accounted for large proportions of the inter-temporal increases in SMI (89.2%), PTSD (31.9%) and suicidality (61.6%). Differential hurricane-related stress did not explain the significantly higher increases among respondents from areas other than New Orleans, though, as this stress was both higher initially and decreased less among respondents from the New Orleans Metropolitan Area than from other areas affected by the hurricane. Outcomes were only weakly related to socio-demographic variables, meaning that high prevalence of hurricane-related mental illness remains widely distributed in the population nearly 2 years after the hurricane.

A 25 year retrospective review of the psychological consequences of the Chernobyl accident.

E.J. Bromet,  J.M. Havenaar,  L.T. Guey (2011)
The Chernobyl Forum Report from the 20th anniversary of the Chernobyl nuclear power plant disaster concluded that mental health effects were the most significant public health consequence of the accident. This paper provides an updated review of research on the psychological impact of the accident during the 25 year period since the catastrophe began. First responders and clean-up workers had the greatest exposure to radiation. Recent studies show that their rates of depression and post-traumatic stress disorder remain elevated two decades later. Very young children and those in utero who lived near the plant when it exploded or in severely contaminated areas have been the subject of considerable research, but the findings are inconsistent. Recent studies of prenatally exposed children conducted in Kiev, Norway and Finland point to specific neuropsychological and psychological impairments associated with radiation exposure, whereas other studies found no significant cognitive or mental health effects in exposed children grown up. General population studies report increased rates of poor self-rated health as well as clinical and subclinical depression, anxiety, and post-traumatic stress disorder. Mothers of young children exposed to the disaster remain a high-risk group for these conditions, primarily due to lingering worries about the adverse health effects on their families. Thus, long-term mental health consequences continue to be a concern. The unmet need for mental health care in affected regions remains an important public health challenge 25 years later. Future research is needed that combines physical and mental health outcome measures to complete the clinical picture. Copyright © 2011 The Royal College of Radiologists. Published by Elsevier Ltd. All rights reserved.

¶ Membership of the Mental Health Group of the Fukushima Health Management Survey is provided in the Acknowledgments.