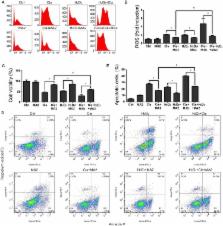 Hearing loss is the most common sensory disorder in humans, and a significant number of cases is due to the ototoxicity of drugs such as cisplatin that cause hair cell (HC) damage. Thus, there is great interest in finding agents and mechanisms that protect HCs from ototoxic drug damage. It has been proposed that epigenetic modifications are related to inner ear development and play a significant role in HC protection and HC regeneration; however, whether the m 6A modification and the ethyl ester form of meclofenamic acid (MA2), which is a highly selective inhibitor of FTO (fatmass and obesity-associated enzyme, one of the primary human demethylases), can affect the process of HC apoptosis induced by ototoxic drugs remains largely unexplored. In this study, we took advantage of the HEI-OC1 cell line, which is a cochlear HC-like cell line, to investigate the role of epigenetic modifications in cisplatin-induced cell death. We found that cisplatin injury caused reactive oxygen species accumulation and increased apoptosis in HEI-OC1 cells, and the cisplatin injury was reduced by co-treatment with MA2 compared to the cisplatin-only group. Further investigation showed that MA2 attenuated cisplatin-induced oxidative stress and apoptosis in HEI-OC1 cells. We next found that the cisplatin-induced upregulation of autophagy was significantly inhibited after MA2 treatment, indicating that MA2 inhibited the cisplatin-induced excessive autophagy. Our findings show that MA2 has a protective effect and improves the viability of HEI-OC1 cells after cisplatin treatment, and they provide new insights into potential therapeutic targets for the amelioration of cisplatin-induced ototoxicity.

Stability and flexibility of epigenetic gene regulation in mammalian development.

Wolf Reik (2007)
During development, cells start in a pluripotent state, from which they can differentiate into many cell types, and progressively develop a narrower potential. Their gene-expression programmes become more defined, restricted and, potentially, 'locked in'. Pluripotent stem cells express genes that encode a set of core transcription factors, while genes that are required later in development are repressed by histone marks, which confer short-term, and therefore flexible, epigenetic silencing. By contrast, the methylation of DNA confers long-term epigenetic silencing of particular sequences--transposons, imprinted genes and pluripotency-associated genes--in somatic cells. Long-term silencing can be reprogrammed by demethylation of DNA, and this process might involve DNA repair. It is not known whether any of the epigenetic marks has a primary role in determining cell and lineage commitment during development.

Functions of autophagy in normal and diseased liver.

Mark J. Czaja,  Terrence Jr,  Wun-Jae Kim … (2013)
Autophagy has emerged as a critical lysosomal pathway that maintains cell function and survival through the degradation of cellular components such as organelles and proteins. Investigations specifically employing the liver or hepatocytes as experimental models have contributed significantly to our current knowledge of autophagic regulation and function. The diverse cellular functions of autophagy, along with unique features of the liver and its principal cell type the hepatocyte, suggest that the liver is highly dependent on autophagy for both normal function and to prevent the development of disease states. However, instances have also been identified in which autophagy promotes pathological changes such as the development of hepatic fibrosis. Considerable evidence has accumulated that alterations in autophagy are an underlying mechanism of a number of common hepatic diseases including toxin-, drug- and ischemia/reperfusion-induced liver injury, fatty liver, viral hepatitis and hepatocellular carcinoma. This review summarizes recent advances in understanding the roles that autophagy plays in normal hepatic physiology and pathophysiology with the intent of furthering the development of autophagy-based therapies for human liver diseases.

R Nusse,  Bryan R Kuo,  John Oghalai … (2012)
Inner ear hair cells are specialized sensory cells essential for auditory function. Previous studies have shown that the sensory epithelium is postmitotic, but it harbors cells that can behave as progenitor cells in vitro, including the ability to form new hair cells. Lgr5, a Wnt target gene, marks distinct supporting cell types in the neonatal cochlea. Here, we tested the hypothesis that Lgr5(+) cells are Wnt-responsive sensory precursor cells. In contrast to their quiescent in vivo behavior, Lgr5(+) cells isolated by flow cytometry from neonatal Lgr5(EGFP-CreERT2/+) mice proliferated and formed clonal colonies. After 10 d in culture, new sensory cells formed and displayed specific hair cell markers (myo7a, calretinin, parvalbumin, myo6) and stereocilia-like structures expressing F-actin and espin. In comparison with other supporting cells, Lgr5(+) cells were enriched precursors to myo7a(+) cells, most of which formed without mitotic division. Treatment with Wnt agonists increased proliferation and colony-formation capacity. Conversely, small-molecule inhibitors of Wnt signaling suppressed proliferation without compromising the myo7a(+) cells formed by direct differentiation. In vivo lineage tracing supported the idea that Lgr5(+) cells give rise to myo7a(+) hair cells in the neonatal Lgr5(EGFP-CreERT2/+) cochlea. In addition, overexpression of β-catenin initiated proliferation and led to transient expansion of Lgr5(+) cells within the cochlear sensory epithelium. These results suggest that Lgr5 marks sensory precursors and that Wnt signaling can promote their proliferation and provide mechanistic insights into Wnt-responsive progenitor cells during sensory organ development.