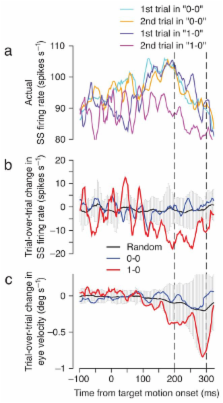 The hypothesis of cerebellar learning proposes that complex spikes in Purkinje cells engage mechanisms of plasticity in the cerebellar cortex; in turn, changes in the cerebellum depress the simple spike response of Purkinje cells to a given stimulus and cause the adaptive modification of a motor behavior. Although many elements of this hypothesis have been supported by prior experiments, the links between complex spikes, simple spike plasticity, and behavior have not yet been examined simultaneously during the learning process. We now pioneer a trial-by-trial analysis of Purkinje cell responses in awake-behaving monkeys, with results that strongly favor a causal role for complex spikes in the induction of cerebellar plasticity during a simple motor learning task. We show that the presence of a complex spike on one learning trial is linked to a substantial depression of simple spike responses on the subsequent trial, at a time when behavioral learning is expressed.

A theory of cerebellar cortex.

D. W. M. Marr (1969)
1. A detailed theory of cerebellar cortex is proposed whose consequence is that the cerebellum learns to perform motor skills. Two forms of input-output relation are described, both consistent with the cortical theory. One is suitable for learning movements (actions), and the other for learning to maintain posture and balance (maintenance reflexes).2. It is known that the cells of the inferior olive and the cerebellar Purkinje cells have a special one-to-one relationship induced by the climbing fibre input. For learning actions, it is assumed that:(a) each olivary cell responds to a cerebral instruction for an elemental movement. Any action has a defining representation in terms of elemental movements, and this representation has a neural expression as a sequence of firing patterns in the inferior olive; and(b) in the correct state of the nervous system, a Purkinje cell can initiate the elemental movement to which its corresponding olivary cell responds.3. Whenever an olivary cell fires, it sends an impulse (via the climbing fibre input) to its corresponding Purkinje cell. This Purkinje cell is also exposed (via the mossy fibre input) to information about the context in which its olivary cell fired; and it is shown how, during rehearsal of an action, each Purkinje cell can learn to recognize such contexts. Later, when the action has been learnt, occurrence of the context alone is enough to fire the Purkinje cell, which then causes the next elemental movement. The action thus progresses as it did during rehearsal.4. It is shown that an interpretation of cerebellar cortex as a structure which allows each Purkinje cell to learn a number of contexts is consistent both with the distributions of the various types of cell, and with their known excitatory or inhibitory natures. It is demonstrated that the mossy fibre-granule cell arrangement provides the required pattern discrimination capability.5. The following predictions are made.(a) The synapses from parallel fibres to Purkinje cells are facilitated by the conjunction of presynaptic and climbing fibre (or post-synaptic) activity.(b) No other cerebellar synapses are modifiable.(c) Golgi cells are driven by the greater of the inputs from their upper and lower dendritic fields.6. For learning maintenance reflexes, 2(a) and 2(b) are replaced by2'. Each olivary cell is stimulated by one or more receptors, all of whose activities are usually reduced by the results of stimulating the corresponding Purkinje cell.7. It is shown that if (2') is satisfied, the circuit receptor --> olivary cell --> Purkinje cell --> effector may be regarded as a stabilizing reflex circuit which is activated by learned mossy fibre inputs. This type of reflex has been called a learned conditional reflex, and it is shown how such reflexes can solve problems of maintaining posture and balance.8. 5(a), and either (2) or (2') are essential to the theory: 5(b) and 5(c) are not absolutely essential, and parts of the theory could survive the disproof of either.

A theory of cerebellar function

Yoichi Ito (2001)
Cerebellar Purkinje cells exhibit a unique type of synaptic plasticity, namely, long-term depression (LTD). When two inputs to a Purkinje cell, one from a climbing fiber and the other from a set of granule cell axons, are repeatedly associated, the input efficacy of the granule cell axons in exciting the Purkinje cell is persistently depressed. Section I of this review briefly describes the history of research around LTD, and section II specifies physiological characteristics of LTD. Sections III and IV then review the massive data accumulated during the past two decades, which have revealed complex networks of signal transduction underlying LTD. Section III deals with a variety of first messengers, receptors, ion channels, transporters, G proteins, and phospholipases. Section IV covers second messengers, protein kinases, phosphatases and other elements, eventually leading to inactivation of DL-alpha-amino-3-hydroxy-5-methyl-4-isoxazolone-propionate-selective glutamate receptors that mediate granule cell-to-Purkinje cell transmission. Section V defines roles of LTD in the light of the microcomplex concept of the cerebellum as functionally eliminating those synaptic connections associated with errors during repeated exercises, while preserving other connections leading to the successful execution of movements. Section VI examines the validity of this microcomplex concept based on the data collected from recent numerous studies of various forms of motor learning in ocular reflexes, eye-blink conditioning, posture, locomotion, and hand/arm movements. Section VII emphasizes the importance of integrating studies on LTD and learning and raises future possibilities of extending cerebellar research to reveal memory mechanisms of implicit learning in general.