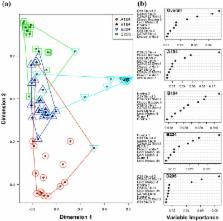 Microorganisms in terrestrial and marine ecosystems are essential to environmental sustainability. In the marine environment, invertebrates often depend on metabolic cooperation with their endosymbionts. Coral reefs, one of the most important marine ecosystems, are based on the symbiosis between a broad diversity of dinoflagellates of the genus Symbiodinium and a wide phyletic diversity of hosts ( i.e., cnidarian, molluscan, poriferan). This diversity is reflected in the ecology and physiology of the symbionts, yet the underlying biochemical mechanisms are still poorly understood. We examined metabolite profiles of four cultured species of Symbiodinium known to form viable symbioses with reef-building corals, S. microadriaticum (cp-type A194), S. minutum (cp-type B184), S. psygmophilum (cp-type B224) and S. trenchii (cp-type D206). Metabolite profiles were shown to differ among Symbiodinium species and were found to be affected by their physiological response to growth in different temperatures and light regimes. A combined Random Forests and Bayesian analysis revealed that the four Symbiodinium species examined primarily differed in their production of sterols and sugars, including a C 29 stanol and the two sterols C 28Δ 5 and C 28Δ 5,22, as well as differences in metabolite abundances of a hexose and inositol. Inositol levels were also strongly affected by changes in temperature across all Symbiodinium species. Our results offer a detailed view of the metabolite profile characteristic of marine symbiotic dinoflagellates of the genus Symbiodinium, and identify patterns of metabolites related to several growth conditions.

John K. Kruschke (2013)
Bayesian estimation for 2 groups provides complete distributions of credible values for the effect size, group means and their difference, standard deviations and their difference, and the normality of the data. The method handles outliers. The decision rule can accept the null value (unlike traditional t tests) when certainty in the estimate is high (unlike Bayesian model comparison using Bayes factors). The method also yields precise estimates of statistical power for various research goals. The software and programs are free and run on Macintosh, Windows, and Linux platforms. PsycINFO Database Record (c) 2013 APA, all rights reserved.

Steven N Goodman (1999)
An important problem exists in the interpretation of modern medical research data: Biological understanding and previous research play little formal role in the interpretation of quantitative results. This phenomenon is manifest in the discussion sections of research articles and ultimately can affect the reliability of conclusions. The standard statistical approach has created this situation by promoting the illusion that conclusions can be produced with certain "error rates," without consideration of information from outside the experiment. This statistical approach, the key components of which are P values and hypothesis tests, is widely perceived as a mathematically coherent approach to inference. There is little appreciation in the medical community that the methodology is an amalgam of incompatible elements, whose utility for scientific inference has been the subject of intense debate among statisticians for almost 70 years. This article introduces some of the key elements of that debate and traces the appeal and adverse impact of this methodology to the P value fallacy, the mistaken idea that a single number can capture both the long-run outcomes of an experiment and the evidential meaning of a single result. This argument is made as a prelude to the suggestion that another measure of evidence should be used--the Bayes factor, which properly separates issues of long-run behavior from evidential strength and allows the integration of background knowledge with statistical findings.

Antonio Jara,  Felicity A. Baker,  Michelle Knowlton … (1997)
Reef-building corals are obligate, mutualistic symbioses of heterotrophic animals and phototrophic dinoflagellates (Symbiodinium spp.). Contrary to the earlier, widely accepted belief that corals harbour only one symbiont, we found that the ecologically dominant Caribbean corals Montastraea annularis and M. faveolata can act as hosts to dynamic, multi-species communities of Symbiodinium. Composition of these communities follows gradients of environmental irradiance, implying that physiological acclimatization is not the only mechanism by which corals cope with environmental heterogeneity. The importance of this diversity was underlined by analysis of a natural episode of coral bleaching. Patterns of bleaching could be explained by the preferential elimination of a symbiont associated with low irradiance from the brightest parts of its distribution. Comparative analyses of symbionts before and after bleaching from the same corals supported this interpretation, and suggested that some corals were protected from bleaching by hosting an additional symbiont that is more tolerant of high irradiance and temperature. This 'natural experiment' suggests that temporal and spatial variability can favour the coexistence of diverse symbionts within a host, despite the potential for destabilizing competition among them.