The gut microbiome in cardio-metabolic health 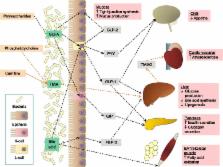 With the prevalence of cardio-metabolic disorders reaching pandemic proportions, the search for modifiable causative factors has intensified. One such potential factor is the vast microbial community inhabiting the human gastrointestinal tract, the gut microbiota. For the past decade evidence has accumulated showing the association of distinct changes in gut microbiota composition and function with obesity, type 2 diabetes and cardiovascular disease. Although causality in humans and the pathophysiological mechanisms involved have yet to be decisively established, several studies have demonstrated that the gut microbiota, as an environmental factor influencing the metabolic state of the host, is readily modifiable through a variety of interventions. In this review we provide an overview of the development of the gut microbiome and its compositional and functional changes in relation to cardio-metabolic disorders, and give an update on recent progress in how this could be exploited in microbiota-based therapeutics.

David Topping,  Peter M. Clifton (2001)
Resistant starch (RS) is starch and products of its small intestinal digestion that enter the large bowel. It occurs for various reasons including chemical structure, cooking of food, chemical modification, and food mastication. Human colonic bacteria ferment RS and nonstarch polysaccharides (NSP; major components of dietary fiber) to short-chain fatty acids (SCFA), mainly acetate, propionate, and butyrate. SCFA stimulate colonic blood flow and fluid and electrolyte uptake. Butyrate is a preferred substrate for colonocytes and appears to promote a normal phenotype in these cells. Fermentation of some RS types favors butyrate production. Measurement of colonic fermentation in humans is difficult, and indirect measures (e.g., fecal samples) or animal models have been used. Of the latter, rodents appear to be of limited value, and pigs or dogs are preferable. RS is less effective than NSP in stool bulking, but epidemiological data suggest that it is more protective against colorectal cancer, possibly via butyrate. RS is a prebiotic, but knowledge of its other interactions with the microflora is limited. The contribution of RS to fermentation and colonic physiology seems to be greater than that of NSP. However, the lack of a generally accepted analytical procedure that accommodates the major influences on RS means this is yet to be established.

Structure, Function and Diversity of the Healthy Human Microbiome

Tatiana Vishnivetskaya,  Jeroen Raes (2013)
Studies of the human microbiome have revealed that even healthy individuals differ remarkably in the microbes that occupy habitats such as the gut, skin, and vagina. Much of this diversity remains unexplained, although diet, environment, host genetics, and early microbial exposure have all been implicated. Accordingly, to characterize the ecology of human-associated microbial communities, the Human Microbiome Project has analyzed the largest cohort and set of distinct, clinically relevant body habitats to date. We found the diversity and abundance of each habitat’s signature microbes to vary widely even among healthy subjects, with strong niche specialization both within and among individuals. The project encountered an estimated 81–99% of the genera, enzyme families, and community configurations occupied by the healthy Western microbiome. Metagenomic carriage of metabolic pathways was stable among individuals despite variation in community structure, and ethnic/racial background proved to be one of the strongest associations of both pathways and microbes with clinical metadata. These results thus delineate the range of structural and functional configurations normal in the microbial communities of a healthy population, enabling future characterization of the epidemiology, ecology, and translational applications of the human microbiome.

Lawrence A David,  Corinne F. Maurice,  Rachel Carmody … (2013)
Long-term diet influences the structure and activity of the trillions of microorganisms residing in the human gut 1–5 , but it remains unclear how rapidly and reproducibly the human gut microbiome responds to short-term macronutrient change. Here, we show that the short-term consumption of diets composed entirely of animal or plant products alters microbial community structure and overwhelms inter-individual differences in microbial gene expression. The animal-based diet increased the abundance of bile-tolerant microorganisms (Alistipes, Bilophila, and Bacteroides) and decreased the levels of Firmicutes that metabolize dietary plant polysaccharides (Roseburia, Eubacterium rectale, and Ruminococcus bromii). Microbial activity mirrored differences between herbivorous and carnivorous mammals 2 , reflecting trade-offs between carbohydrate and protein fermentation. Foodborne microbes from both diets transiently colonized the gut, including bacteria, fungi, and even viruses. Finally, increases in the abundance and activity of Bilophila wadsworthia on the animal-based diet support a link between dietary fat, bile acids, and the outgrowth of microorganisms capable of triggering inflammatory bowel disease 6 . In concert, these results demonstrate that the gut microbiome can rapidly respond to altered diet, potentially facilitating the diversity of human dietary lifestyles.