Modeling Dynamic Introduction of Chikungunya Virus in the United States 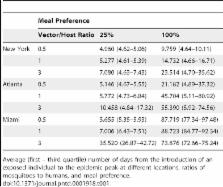 Chikungunya is a mosquito-borne viral infection of humans that previously was confined to regions in central Africa. However, during this century, the virus has shown surprising potential for geographic expansion as it invaded other countries including more temperate regions. With no vaccine and no specific treatment, the main control strategy for Chikungunya remains preventive control of mosquito populations. In consideration for the risk of Chikungunya introduction to the US, we developed a model for disease introduction based on virus introduction by one individual. Our study combines a climate-based mosquito population dynamics stochastic model with an epidemiological model to identify temporal windows that have epidemic risk. We ran this model with temperature data from different locations to study the geographic sensitivity of epidemic potential. We found that in locations with marked seasonal variation in temperature there also was a season of epidemic risk matching the period of the year in which mosquito populations survive and grow. In these locations controlling mosquito population sizes might be an efficient strategy. But, in other locations where the temperature supports mosquito development all year the epidemic risk is high and (practically) constant. In these locations, mosquito population control alone might not be an efficient disease control strategy and other approaches should be implemented to complement it. Our results strongly suggest that, in the event of an introduction and establishment of Chikungunya in the US, endemic and epidemic regions would emerge initially, primarily defined by environmental factors controlling annual mosquito population cycles. These regions should be identified to plan different intervention measures. In addition, reducing vector: human ratios can lower the probability and magnitude of outbreaks for regions with strong seasonal temperature patterns. This is the first model to consider Chikungunya risk in the US and can be applied to other vector borne diseases.

Chikungunya fever is a mosquito-borne viral infection showing a surprising potential for geographic expansion. Similar to other tropical infectious diseases having no vaccine and no specific treatment, the main control strategy for Chikungunya remains reduction of mosquito population size. We developed a model for disease introduction that combines a climate based mosquito population dynamics stochastic model with an epidemiological model in order to identify temporal windows during which disease introduction through one exposed individual might compromise the health status of the entire human population. We ran this model with temperature data from different locations showing the geographic sensitivity of this risk. The identification of temporal windows with epidemic risk at different spatial locations is key to guiding mosquito population control campaigns. Locations with marked seasonal variation also have a season with high epidemic risk matching the period in which mosquito populations survive and grow, therefore controlling mosquito population sizes might be an optimal strategy in those areas. However, locations with other temperature patterns may need additional control strategies to avoid epidemics. To our knowledge, this is the first model to explore Chikungunya introduction in the USA. Our modeling approach can be used for other vector borne diseases and can be expanded to compare the outcome with different control strategies.

Infection with chikungunya virus in Italy: an outbreak in a temperate region.

A Cassone,  M G Ciufolini,  David R. Angelini … (2007)
Chikungunya virus (CHIKV), which is transmitted by Aedes spp mosquitoes, has recently caused several outbreaks on islands in the Indian Ocean and on the Indian subcontinent. We report on an outbreak in Italy. After reports of a large number of cases of febrile illness of unknown origin in two contiguous villages in northeastern Italy, an outbreak investigation was done to identify the primary source of infection and modes of transmission. An active surveillance system was also implemented. The clinical case definition was presentation with fever and joint pain. Blood samples were gathered and analysed by PCR and serological assays to identify the causal agent. Locally captured mosquitoes were also tested by PCR. Phylogenetic analysis of the CHIKV E1 region was done. Analysis of samples from human beings and from mosquitoes showed that the outbreak was caused by CHIKV. We identified 205 cases of infection with CHIKV between July 4 and Sept 27, 2007. The presumed index case was a man from India who developed symptoms while visiting relatives in one of the villages. Phylogenetic analysis showed a high similarity between the strains found in Italy and those identified during an earlier outbreak on islands in the Indian Ocean. The disease was fairly mild in nearly all cases, with only one reported death. This outbreak of CHIKV disease in a non-tropical area was to some extent unexpected and emphasises the need for preparedness and response to emerging infectious threats in the era of globalisation.

This work was supported by National Institute for Food and Agriculture Hatch grant NYC 2010-11-184 and Cornell's Atkinson Center Climate Change and Disease Program. ISV and KEO were supported by CSU's MIP department and NIH NIAID R01 AI046435. The funders had no role in study design, data collection and analysis, decision to publish, or preparation of the manuscript.