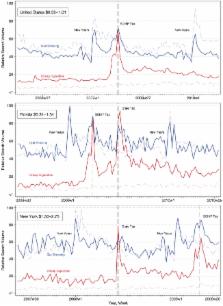 Smokers can use the web to continue or quit their habit. Online vendors sell reduced or tax-free cigarettes lowering smoking costs, while health advocates use the web to promote cessation. We examined how smokers' tax avoidance and smoking cessation Internet search queries were motivated by the United States' (US) 2009 State Children's Health Insurance Program (SCHIP) federal cigarette excise tax increase and two other state specific tax increases. Google keyword searches among residents in a taxed geography (US or US state) were compared to an untaxed geography (Canada) for two years around each tax increase. Search data were normalized to a relative search volume (RSV) scale, where the highest search proportion was labeled 100 with lesser proportions scaled by how they relatively compared to the highest proportion. Changes in RSV were estimated by comparing means during and after the tax increase to means before the tax increase, across taxed and untaxed geographies. The SCHIP tax was associated with an 11.8% (95% confidence interval [95%CI], 5.7 to 17.9; p<.001) immediate increase in cessation searches; however, searches quickly abated and approximated differences from pre-tax levels in Canada during the months after the tax. Tax avoidance searches increased 27.9% (95%CI, 15.9 to 39.9; p<.001) and 5.3% (95%CI, 3.6 to 7.1; p<.001) during and in the months after the tax compared to Canada, respectively, suggesting avoidance is the more pronounced and durable response. Trends were similar for state-specific tax increases but suggest strong interactive processes across taxes. When the SCHIP tax followed Florida's tax, versus not, it promoted more cessation and avoidance searches. Efforts to combat tax avoidance and increase cessation may be enhanced by using interventions targeted and tailored to smokers' searches. Search query surveillance is a valuable real-time, free and public method, that may be generalized to other behavioral, biological, informational or psychological outcomes manifested online.

Stages and processes of self-change of smoking: toward an integrative model of change.

Publisher ID: PONE-D-10-05101
DOI: 10.1371/journal.pone.0016777
PMC ID: 3059206
PubMed ID: 21436883
Copyright statement: Ayers et al. This is an open-access article distributed under the terms of the Creative Commons Attribution License, which permits unrestricted use, distribution, and reproduction in any medium, provided the original author and source are credited.