Improving PET Imaging Acquisition and Analysis With Machine Learning: A Narrative Review With Focus on Alzheimer's Disease and Oncology 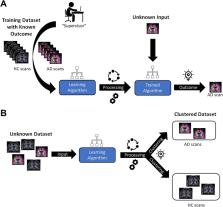 Machine learning (ML) algorithms have found increasing utility in the medical imaging field and numerous applications in the analysis of digital biomarkers within positron emission tomography (PET) imaging have emerged. Interest in the use of artificial intelligence in PET imaging for the study of neurodegenerative diseases and oncology stems from the potential for such techniques to streamline decision support for physicians providing early and accurate diagnosis and allowing personalized treatment regimens. In this review, the use of ML to improve PET image acquisition and reconstruction is presented, along with an overview of its applications in the analysis of PET images for the study of Alzheimer's disease and oncology.

Kenneth Clark,  Bruce A Vendt,  Kirk Smith … (2013)
The National Institutes of Health have placed significant emphasis on sharing of research data to support secondary research. Investigators have been encouraged to publish their clinical and imaging data as part of fulfilling their grant obligations. Realizing it was not sufficient to merely ask investigators to publish their collection of imaging and clinical data, the National Cancer Institute (NCI) created the open source National Biomedical Image Archive software package as a mechanism for centralized hosting of cancer related imaging. NCI has contracted with Washington University in Saint Louis to create The Cancer Imaging Archive (TCIA)-an open-source, open-access information resource to support research, development, and educational initiatives utilizing advanced medical imaging of cancer. In its first year of operation, TCIA accumulated 23 collections (3.3 million images). Operating and maintaining a high-availability image archive is a complex challenge involving varied archive-specific resources and driven by the needs of both image submitters and image consumers. Quality archives of any type (traditional library, PubMed, refereed journals) require management and customer service. This paper describes the management tasks and user support model for TCIA.

Variability of textural features in FDG PET images due to different acquisition modes and reconstruction parameters.

Ngoneh Jallow,  Paulina E Galavis,  Christian Hollensen … (2010)
Characterization of textural features (spatial distributions of image intensity levels) has been considered as a tool for automatic tumor segmentation. The purpose of this work is to study the variability of the textural features in PET images due to different acquisition modes and reconstruction parameters. Twenty patients with solid tumors underwent PET/CT scans on a GE Discovery VCT scanner, 45-60 minutes post-injection of 10 mCi of [(18)F]FDG. Scans were acquired in both 2D and 3D modes. For each acquisition the raw PET data was reconstructed using five different reconstruction parameters. Lesions were segmented on a default image using the threshold of 40% of maximum SUV. Fifty different texture features were calculated inside the tumors. The range of variations of the features were calculated with respect to the average value. Fifty textural features were classified based on the range of variation in three categories: small, intermediate and large variability. Features with small variability (range ≤ 5%) were entropy-first order, energy, maximal correlation coefficient (second order feature) and low-gray level run emphasis (high-order feature). The features with intermediate variability (10% ≤ range ≤ 25%) were entropy-GLCM, sum entropy, high gray level run emphsis, gray level non-uniformity, small number emphasis, and entropy-NGL. Forty remaining features presented large variations (range > 30%). Textural features such as entropy-first order, energy, maximal correlation coefficient, and low-gray level run emphasis exhibited small variations due to different acquisition modes and reconstruction parameters. Features with low level of variations are better candidates for reproducible tumor segmentation. Even though features such as contrast-NGTD, coarseness, homogeneity, and busyness have been previously used, our data indicated that these features presented large variations, therefore they could not be considered as a good candidates for tumor segmentation.

The effect of SUV discretization in quantitative FDG-PET Radiomics: the need for standardized methodology in tumor texture analysis

Ralph Leijenaar,  Georgi Nalbantov,  Sara Carvalho … (2015)
FDG-PET-derived textural features describing intra-tumor heterogeneity are increasingly investigated as imaging biomarkers. As part of the process of quantifying heterogeneity, image intensities (SUVs) are typically resampled into a reduced number of discrete bins. We focused on the implications of the manner in which this discretization is implemented. Two methods were evaluated: (1) RD, dividing the SUV range into D equally spaced bins, where the intensity resolution (i.e. bin size) varies per image; and (2) RB, maintaining a constant intensity resolution B. Clinical feasibility was assessed on 35 lung cancer patients, imaged before and in the second week of radiotherapy. Forty-four textural features were determined for different D and B for both imaging time points. Feature values depended on the intensity resolution and out of both assessed methods, RB was shown to allow for a meaningful inter- and intra-patient comparison of feature values. Overall, patients ranked differently according to feature values–which was used as a surrogate for textural feature interpretation–between both discretization methods. Our study shows that the manner of SUV discretization has a crucial effect on the resulting textural features and the interpretation thereof, emphasizing the importance of standardized methodology in tumor texture analysis.