Ascorbic acid metabolism and functions: A comparison of plants and mammals 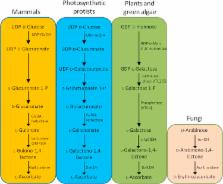 Ascorbic acid is synthesised by eukaryotes, the known exceptions being primates and some other animal groups which have lost functional gulonolactone oxidase. Prokaryotes do not synthesise ascorbate and do not need an ascorbate supply, so the functions that are essential for mammals and plants are not required or are substituted by other compounds. The ability of ascorbate to donate electrons enables it to act as a free radical scavenger and to reduce higher oxidation states of iron to Fe 2+. These reactions are the basis of its biological activity along with the relative stability of the resulting resonance stabilised monodehydroascorbate radical. The importance of these properties is emphasised by the evolution of at least three biosynthetic pathways and production of an ascorbate analogue, erythroascorbate, by fungi. The iron reducing activity of ascorbate maintains the reactive centre Fe 2+ of 2-oxoglutarate-dependent dioxygenases (2-ODDs) thus preventing inactivation. These enzymes have diverse functions and, recently, the possibility that ascorbate status in mammals could influence 2-ODDs involved in histone and DNA demethylation thereby influencing stem cell differentiation and cancer has been uncovered. Ascorbate is involved in iron uptake and transport in plants and animals. While the above biochemical functions are shared between mammals and plants, ascorbate peroxidase (APX) is an enzyme family limited to plants and photosynthetic protists. It provides these organisms with increased capacity to remove H 2O 2 produced by photosynthetic electron transport and photorespiration. The Fe reducing activity of ascorbate enables hydroxyl radical production (pro-oxidant effect) and the reactivity of dehydroascorbate (DHA) and reaction of its degradation products with proteins (dehydroascorbylation and glycation) is potentially damaging. Ascorbate status influences gene expression in plants and mammals but at present there is little evidence that it acts as a specific signalling molecule. It most likely acts indirectly by influencing the redox state of thiols and 2-ODD activity. However, the possibility that dehydroascorbylation is a regulatory post-translational protein modification could be explored. 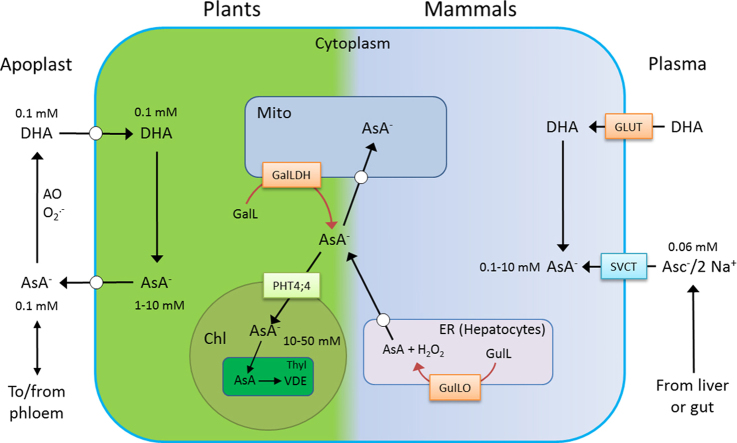 Uric acid provides an antioxidant defense in humans against oxidant- and radical-caused aging and cancer: a hypothesis.

E Schwiers,  P HOCHSTEIN,  James Ames … (1981)
During primate evolution, a major factor in lengthening life-span and decreasing age-specific cancer rates may have been improved protective mechanisms against oxygen radicals. We propose that one of these protective systems is plasma uric acid, the level of which increased markedly during primate evolution as a consequence of a series of mutations. Uric acid is a powerful antioxidant and is a scavenger of singlet oxygen and radicals. We show that, at physiological concentrations, urate reduces the oxo-heme oxidant formed by peroxide reaction with hemoglobin, protects erythrocyte ghosts against lipid peroxidation, and protects erythrocytes from peroxidative damage leading to lysis. Urate is about as effective an antioxidant as ascorbate in these experiments. Urate is much more easily oxidized than deoxynucleosides by singlet oxygen and is destroyed by hydroxyl radicals at a comparable rate. The plasma urate levels in humans (about 300 microM) is considerably higher than the ascorbate level, making it one of the major antioxidants in humans. Previous work on urate reported in the literature supports our experiments and interpretations, although the findings were not discussed in a physiological context.

Rui Ma,  Liwei Sun,  Xuenan Chen … (2016)
F. Ginseng (Panax ginseng) is planted in the forest to enhance the natural ginseng resources, which have an immense medicinal and economic value. The morphology of the cultivated plants becomes similar to that of wild growing ginseng (W. Ginseng) over the years. So far, there have been no studies highlighting the physiological or functional changes in F. Ginseng and its wild counterparts. In the present study, we used proteomic technologies (2DE and iTRAQ) coupled to mass spectrometry to compare W. Ginseng and F. Ginseng at various growth stages. Hierarchical cluster analysis based on protein abundance revealed that the protein expression profile of 25-year-old F. Ginseng was more like W. Ginseng than less 20-year-old F. Ginseng. We identified 192 differentially expressed protein spots in F. Ginseng. These protein spots increased with increase in growth years of F. Ginseng and were associated with proteins involved in energy metabolism, ginsenosides biosynthesis, and stress response. The mRNA, physiological, and metabolic analysis showed that the external morphology, protein expression profile, and ginsenoside synthesis ability of the F. Ginseng increased just like that of W. Ginseng with the increase in age. Our study represents the first characterization of the proteome of F. Ginseng during development and provides new insights into the metabolism and accumulation of ginsenosides.