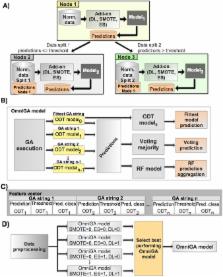 Classification problems from different domains vary in complexity, size, and imbalance of the number of samples from different classes. Although several classification models have been proposed, selecting the right model and parameters for a given classification task to achieve good performance is not trivial. Therefore, there is a constant interest in developing novel robust and efficient models suitable for a great variety of data. Here, we propose OmniGA, a framework for the optimization of omnivariate decision trees based on a parallel genetic algorithm, coupled with deep learning structure and ensemble learning methods. The performance of the OmniGA framework is evaluated on 12 different datasets taken mainly from biomedical problems and compared with the results obtained by several robust and commonly used machine-learning models with optimized parameters. The results show that OmniGA systematically outperformed these models for all the considered datasets, reducing the F 1 score error in the range from 100% to 2.25%, compared to the best performing model. This demonstrates that OmniGA produces robust models with improved performance. OmniGA code and datasets are available at www.cbrc.kaust.edu.sa/omniga/.

U Alon,  D Notterman,  A. Levine … (1999)
Oligonucleotide arrays can provide a broad picture of the state of the cell, by monitoring the expression level of thousands of genes at the same time. It is of interest to develop techniques for extracting useful information from the resulting data sets. Here we report the application of a two-way clustering method for analyzing a data set consisting of the expression patterns of different cell types. Gene expression in 40 tumor and 22 normal colon tissue samples was analyzed with an Affymetrix oligonucleotide array complementary to more than 6,500 human genes. An efficient two-way clustering algorithm was applied to both the genes and the tissues, revealing broad coherent patterns that suggest a high degree of organization underlying gene expression in these tissues. Coregulated families of genes clustered together, as demonstrated for the ribosomal proteins. Clustering also separated cancerous from noncancerous tissue and cell lines from in vivo tissues on the basis of subtle distributed patterns of genes even when expression of individual genes varied only slightly between the tissues. Two-way clustering thus may be of use both in classifying genes into functional groups and in classifying tissues based on gene expression.

Scott Pomeroy,  Pablo Tamayo,  Michelle Gaasenbeek … (2002)
Embryonal tumours of the central nervous system (CNS) represent a heterogeneous group of tumours about which little is known biologically, and whose diagnosis, on the basis of morphologic appearance alone, is controversial. Medulloblastomas, for example, are the most common malignant brain tumour of childhood, but their pathogenesis is unknown, their relationship to other embryonal CNS tumours is debated, and patients' response to therapy is difficult to predict. We approached these problems by developing a classification system based on DNA microarray gene expression data derived from 99 patient samples. Here we demonstrate that medulloblastomas are molecularly distinct from other brain tumours including primitive neuroectodermal tumours (PNETs), atypical teratoid/rhabdoid tumours (AT/RTs) and malignant gliomas. Previously unrecognized evidence supporting the derivation of medulloblastomas from cerebellar granule cells through activation of the Sonic Hedgehog (SHH) pathway was also revealed. We show further that the clinical outcome of children with medulloblastomas is highly predictable on the basis of the gene expression profiles of their tumours at diagnosis.