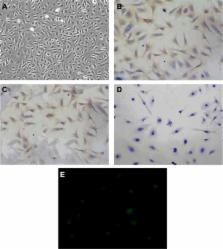 Lipopolysaccharide (LPS) was shown to induce an increase in caveolin-1 (Cav-1) expression in endothelial cells; however, the mechanisms regarding this response and the consequences on caveolae-mediated transcellular transport have not been completely investigated. This study aims to investigate the role of LPS-induced Cav-1 phosphorylation in pulmonary microvascular permeability in pulmonary microvascular endothelial cells (PMVECs).

Rat PMVECs were isolated, cultured, and identified. Endocytosis experiments were employed to stain the nuclei by DAPI, and images were obtained with a fluorescence microscope. Permeability of endothelial cultures was measured to analyze the barrier function of endothelial monolayer. Western blot assay was used to examine the expression of Cav-1, pCav-1, triton-insoluble Cav-1, and triton-soluble Cav-1 protein.

Richard D Minshall,  Christina M. J. E. Vandenbroucke-Grauls,  Asrar B. Malik … (2008)
The endothelium is a semi-permeable barrier that regulates the flux of liquid and solutes, including plasma proteins, between the blood and surrounding tissue. The permeability of the vascular barrier can be modified in response to specific stimuli acting on endothelial cells. Transport across the endothelium can occur via two different pathways: through the endothelial cell (transcellular) or between adjacent cells, through interendothelial junctions (paracellular). This review focuses on the regulation of the paracellular pathway. The paracellular pathway is composed of adhesive junctions between endothelial cells, both tight junctions and adherens junctions. The actin cytoskeleton is bound to each junction and controls the integrity of each through actin remodeling. These interendothelial junctions can be disassembled or assembled to either increase or decrease paracellular permeability. Mediators, such as thrombin, TNF-alpha, and LPS, stimulate their respective receptor on endothelial cells to initiate signaling that increases cytosolic Ca2+ and activates myosin light chain kinase (MLCK), as well as monomeric GTPases RhoA, Rac1, and Cdc42. Ca2+ activation of MLCK and RhoA disrupts junctions, whereas Rac1 and Cdc42 promote junctional assembly. Increased endothelial permeability can be reversed with "barrier stabilizing agents," such as sphingosine-1-phosphate and cyclic adenosine monophosphate (cAMP). This review provides an overview of the mechanisms that regulate paracellular permeability.

Jun Shimizu,  Yang Zhao,  Sean Garrean … (2006)
Caveolin-1, the principal structural and signaling protein of caveolae, is implicated in NO-mediated cell signaling events, but its precise role in inflammation is not well understood. Using caveolin-1-knockout (Cav-1(-/-)) mice, we addressed the role of caveolin-1 in the lung inflammatory response to sepsis induced by i.p. injection of LPS. LPS-challenged wild-type (WT) lungs exhibited significant increases in neutrophil sequestration (approximately 16-fold), lung microvascular permeability K(f,c) (approximately 5.7-fold), and edema formation (approximately 1.6-fold). Compared with WT, Cav-1(-/-) lungs showed marked attenuation of LPS-induced neutrophil sequestration (approximately 11-fold increase) and inhibition of microvascular barrier breakdown and edema formation. Prevention of lung injury in Cav-1(-/-) mice was associated with decreased mortality in response to LPS challenge. To address the basis of the reduced inflammation and injury in Cav-1(-/-) lungs, we examined the role of NO because its plasma concentration is known to be increased in Cav-1(-/-) mice. Cav-1(-/-) mouse lungs demonstrated a significant increase in endothelial NO synthase (eNOS)-derived NO production relative to WT, which is consistent with the role of caveolin-1 as a negative regulator of eNOS activity. Cav-1(-/-) lungs concurrently showed suppression of NF-kappaB activity and decreased transcription of inducible NO synthase and ICAM-1. Coadministration of LPS with the NO synthase inhibitor nitro-L-arginine in Cav-1(-/-) mice prevented the suppression of NF-kappaB activity and restored lung polymorphonuclear leukocyte sequestration in response to LPS challenge. Thus, caveolin-1, through its ability to regulate eNOS-derived NO production, is a crucial determinant of NF-kappaB activation and the lung inflammatory response to LPS.

Jonathan L. King,  Franco D’Alessio,  Neil Aggarwal … (2008)
The first report of acute respiratory distress syndrome (ARDS) was published in 1967, and even now acute lung injury (ALI) and ARDS are severe forms of diffuse lung disease that impose a substantial health burden all over the world. Recent estimates indicate approximately 190,000 cases per year of ALI in the United States each year, with an associated 74,500 deaths per year. Common causes of ALI/ARDS are sepsis, pneumonia, trauma, aspiration pneumonia, pancreatitis, and so on. Several pathologic stages of ALI/ARDS have been described: acute inflammation with neutrophil infiltration, fibroproliferative phase with hyaline membranes, with varying degrees of interstitial fibrosis, and resolution phase. There has been intense investigation into the pathophysiologic events relevant to each stage of ALI/ARDS, and much has been learned in the alveolar epithelial, endobronchial homeostasis, and alveolar cell immune responses, especially neutrophils and alveolar macrophages in an animal model. However, these effective results in the animal models are not equally adoptive to those in randomized, controlled trials. The clinical course of ALI/ARDS is variable with the likely pathophysiologic complexity of human ALI/ARDS. In 1994, the definition was recommended by the American-European Consensus Conference Committee, which facilitated easy nomination of patients with ALI/ARDS for a randomized, clinical trial. Here, we review the recent randomized, clinical trials of ALI/ARDS.