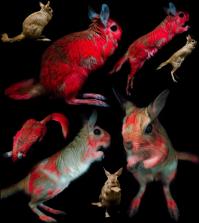 Biofluorescence has been detected in several nocturnal-crepuscular organisms from invertebrates to birds and mammals. Biofluorescence in mammals has been detected across the phylogeny, including the monotreme duck-billed platypus ( Ornithorhyncus anatinus), marsupial opossums (Didelphidae), and New World placental flying squirrels ( Gluacomys spp.). Here, we document vivid biofluorescence of springhare (Pedetidae) in both museum specimens and captive individuals—the first documented biofluorescence of an Old World placental mammal. We explore the variation in biofluorescence across our sample and characterize its physical and chemical properties. The striking visual patterning and intensity of color shift was unique relative to biofluorescence found in other mammals. We establish that biofluorescence in springhare likely originates within the cuticle of the hair fiber and emanates, at least partially, from several fluorescent porphyrins and potentially one unassigned molecule absent from our standard porphyrin mixture. This discovery further supports the hypothesis that biofluorescence may be ecologically important for nocturnal-crepuscular mammals and suggests that it may be more broadly distributed throughout Mammalia than previously thought.

Biosynthesis of heme in mammals.

D Phillips,  Jonathan P. Kushner,  Richard Ajioka (2006)
Most iron in mammalian systems is routed to mitochondria to serve as a substrate for ferrochelatase. Ferrochelatase inserts iron into protoporphyrin IX to form heme which is incorporated into hemoglobin and cytochromes, the dominant hemoproteins in mammals. Tissue-specific regulatory features characterize the heme biosynthetic pathway. In erythroid cells, regulation is mediated by erythroid-specific transcription factors and the availability of iron as Fe/S clusters. In non-erythroid cells the pathway is regulated by heme-mediated feedback inhibition. All of the enzymes in the heme biosynthetic pathway have been crystallized and the crystal structures have permitted detailed analyses of enzyme mechanisms. All of the genes encoding the heme biosynthetic enzymes have been cloned and mutations of these genes are responsible for a group of human disorders designated the porphyrias and for X-linked sideroblastic anemia. The biochemistry, structural biology and the mechanisms of tissue-specific regulation are presented in this review along with the key features of the porphyric disorders.

The evolution of color vision in nocturnal mammals.

Shuyi Zhang,  Chanjuan Li,  Stephen J Rossiter … (2009)
Nonfunctional visual genes are usually associated with species that inhabit poor light environments (aquatic/subterranean/nocturnal), and these genes are believed to have lost function through relaxed selection acting on the visual system. Indeed, the visual system is so adaptive that the reconstruction of intact ancestral opsin genes has been used to reject nocturnality in ancestral primates. To test these assertions, we examined the functionality of the short and medium- to long-wavelength opsin genes in a group of mammals that are supremely adapted to a nocturnal niche: the bats. We sequenced the visual cone opsin genes in 33 species of bat with diverse sensory ecologies and reconstructed their evolutionary history spanning 65 million years. We found that, whereas the long-wave opsin gene was conserved in all species, the short-wave opsin gene has undergone dramatic divergence among lineages. The occurrence of gene defects in the short-wave opsin gene leading to loss of function was found to directly coincide with the origin of high-duty-cycle echolocation and changes in roosting ecology in some lineages. Our findings indicate that both opsin genes have been under purifying selection in the majority bats despite a long history of nocturnality. However, when spectacular losses do occur, these result from an evolutionary sensory modality tradeoff, most likely driven by subtle shifts in ecological specialization rather than a nocturnal lifestyle. Our results suggest that UV color vision plays a considerably more important role in nocturnal mammalian sensory ecology than previously appreciated and highlight the caveat of inferring light environments from visual opsins and vice versa.

The Covert World of Fish Biofluorescence: A Phylogenetically Widespread and Phenotypically Variable Phenomenon

John S. Sparks,  Robert C. Schelly,  W. Leo Smith … (2014)
The discovery of fluorescent proteins has revolutionized experimental biology. Whereas the majority of fluorescent proteins have been identified from cnidarians, recently several fluorescent proteins have been isolated across the animal tree of life. Here we show that biofluorescence is not only phylogenetically widespread, but is also phenotypically variable across both cartilaginous and bony fishes, highlighting its evolutionary history and the possibility for discovery of numerous novel fluorescent proteins. Fish biofluorescence is especially common and morphologically variable in cryptically patterned coral-reef lineages. We identified 16 orders, 50 families, 105 genera, and more than 180 species of biofluorescent fishes. We have also reconstructed our current understanding of the phylogenetic distribution of biofluorescence for ray-finned fishes. The presence of yellow long-pass intraocular filters in many biofluorescent fish lineages and the substantive color vision capabilities of coral-reef fishes suggest that they are capable of detecting fluoresced light. We present species-specific emission patterns among closely related species, indicating that biofluorescence potentially functions in intraspecific communication and evidence that fluorescence can be used for camouflage. This research provides insight into the distribution, evolution, and phenotypic variability of biofluorescence in marine lineages and examines the role this variation may play.