Cardiac function in mild primary hyperparathyroidism and the outcome after parathyroidectomy 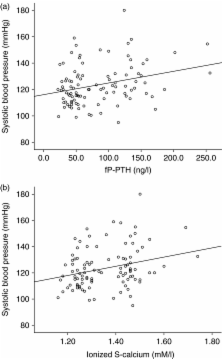 Primary hyperparathyroidism (PHPT) is associated with cardiovascular morbidity. The extent of cardiovascular abnormalities in patients with mild-asymptomatic disease is unclear. Using sensitive echocardiographic methods, we compared cardiac structure and function in patients with mild PHPT and in healthy controls, and evaluated the changes after parathyroidectomy (PTX).

In a prospective case–control design, we studied 51 PHPT patients without any cardiovascular risk factors/diseases and 51 healthy matched controls. Cardiac structure, and systolic and diastolic function were evaluated by echocardiography and Doppler tissue imaging (DTI). Blood pressure (BP) and heart rate were measured.

Our results indicate that patients with PHPT without cardiovascular risk factors have a normal global systolic and diastolic function and cardiac morphology. BP and the systolic velocities were marginally reduced after PTX, but reflected the values of the control group. Our findings warrant further investigation of the clinical and prognostic significance of these possibly disease-related inotropic effects.

Guidelines for the management of asymptomatic primary hyperparathyroidism: summary statement from the third international workshop.

A. K. Azad Khan,  J. Potts,   … (2009)
Asymptomatic primary hyperparathyroidism (PHPT) is a common clinical problem. The purpose of this report is to guide the use of diagnostics and management for this condition in clinical practice. Interested professional societies selected representatives for the consensus committee and provided funding for a one-day meeting. A subgroup of this committee set the program and developed key questions for review. Consensus was established at a closed meeting that followed and at subsequent discussions. Each question was addressed by a relevant literature search (on PubMed), and the data were presented for discussion at the group meeting. Consensus was achieved by a group meeting. Statements were prepared and reviewed by all authors who represented the Planning Committee and the participating professional societies.

(Correspondence should be addressed to P Farahnak; Email: parastou.farahnak@ 123456ki.se )

This is an Open Access article distributed under the terms of the European Journal of Endocrinology's Re-use Licence which permits unrestricted non-commercial use, distribution, and reproduction in any medium, provided the original work is properly cited.