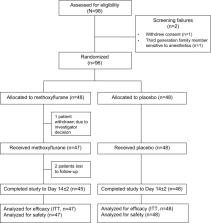 The undertreatment of acute pain presents a significant challenge in the Emergency Department. This post hoc subgroup analysis of a previously reported randomized controlled UK study reports the efficacy and safety of low-dose methoxyflurane analgesia in treating adolescent patients with moderate-to-severe trauma pain.

Three hundred patients (96 in the adolescent subgroup) aged ≥12 years requiring analgesia for acute trauma pain (pain score of 4–7 on the Numerical Rating Scale) at triage were randomized 1:1 to methoxyflurane (up to 6 mL) or placebo (normal saline), both administered using a Penthrox ® inhaler. The patient could request rescue medication (paracetamol/opioids) at any time. The primary endpoint was the change from baseline in visual analog scale (VAS) pain intensity.

This subgroup analysis shows that low-dose inhaled methoxyflurane is a rapid-acting and effective analgesic in adolescent patients presenting with moderate-to-severe trauma pain.

R. Bonacci,  Brenda K. Todd,  Duane J. Funk … (1996)
To determine the amount of change in pain severity, as measured by a visual analog scale, that constitutes a minimum clinically significant difference. Patients 18 years of age or older who presented with acute pain resulting from trauma were enrolled in this prospective, descriptive study. The setting was an urban county hospital emergency department with a Level 1 trauma center. In the course of a brief interview, patients were asked to indicate their current pain severity with a single mark through a standard 100-mm visual analog scale. At intervals of 20 minutes for the next 2 hours, patients were asked to repeat this measurement and, in addition, to contrast their present pain severity with that at the time of the previous measurement. They were to indicate whether they had "much less," "a little less," "about the same," "a little more," or "much more" pain. All contrasts were made without reference to prior visual analog scale measurements. A maximum of six measurements of pain change were recorded per patient. Measurements ended when the patient left the ED or when the patient reported a pain score of zero. The minimum clinically significant change in visual analog scale pain score was defined as the mean difference between current and preceding visual analog scale scores when the subject noted a little less or a little more pain. Forty-eight subjects were enrolled, and 248 pain contrasts were recorded. Of these contrasts, 41 were rated as a little less and 39 as a little more pain. The mean difference between current and preceding visual analog scale scores in these 80 contrasts was 13 mm (95% confidence interval, 10 to 17 mm). The minimum clinically significant change in patient pain severity measured with a 100-mm visual analog scale was 13 mm. Studies of pain experience that report less than a 13-mm change in pain severity, although statistically significant, may have no clinical importance.

The high prevalence of pain in emergency medical care.

Cory B Giles,  Peter J H Jones,  Kelly K Keene … (2002)
Although there is a widely held belief that pain is the number 1 complaint in emergency medical care, few studies have actually assessed the prevalence of pain in the emergency department (ED). We conducted an analysis of secondary data by using explicit data abstraction rules to determine the prevalence of pain in the ED and to classify the location, origin, and duration of the pain. This retrospective cross-sectional study was conducted at an urban teaching hospital in Indianapolis, IN. Charts from 1,665 consecutive ED visits during a 7-day period were reviewed. Pain was defined as the word pain or a pain equivalent word (including aching, burning, and discomfort) recorded on the chart. Of the 1,665 visits, 61.2% had pain documented anywhere on the chart, 34.1% did not have pain, and 4.7% were procedures. Pain was a chief complaint for 52.2% of the visits. This high prevalence of pain has important implications for the allocation of resources as well as educational and research efforts in emergency medical care. Copyright 2002, Elsevier Science (USA). All rights reserved.)

A randomized controlled trial comparing intranasal fentanyl to intravenous morphine for managing acute pain in children in the emergency department.

Ian Jacobs,  Alison D. O’Brien,  Meredith Borland … (2007)
We compare the efficacy of intranasal fentanyl versus intravenous morphine in a pediatric population presenting to an emergency department (ED) with acute long-bone fractures. We conducted a prospective, randomized, double-blind, placebo-controlled, clinical trial in a tertiary pediatric ED between September 2001 and January 2005. A convenience sample of children aged 7 to 15 years with clinically deformed closed long-bone fractures was included to receive either active intravenous morphine (10 mg/mL) and intranasal placebo or active intranasal concentrated fentanyl (150 microg/mL) and intravenous placebo. Exclusion criteria were narcotic analgesia within 4 hours of arrival, significant head injury, allergy to opiates, nasal blockage, or inability to perform pain scoring. Pain scores were rated by using a 100-mm visual analog scale at 0, 5, 10, 20, and 30 minutes. Routine clinical observations and adverse events were recorded. Sixty-seven children were enrolled (mean age 10.9 years [SD 2.4]). Fractures were radius or ulna 53 (79.1%), humerus 9 (13.4%), tibia or fibula 4 (6.0%), and femur 1 (1.5%). Thirty-four children received intravenous (i.v.) morphine and 33 received intranasal fentanyl. Statistically significant differences in visual analog scale scores were not observed between the 2 treatment arms either preanalgesia or at 5, 10, 20, or 30 minutes postanalgesia (P=.333). At 10 minutes, the difference in mean visual analog scale between the morphine and fentanyl groups was -5 mm (95% confidence interval -16 to 7 mm). Reductions in combined pain scores occurred at 5 minutes (20 mm; P=.000), 10 minutes (4 mm; P=.012), and 20 minutes (8 mm; P=.000) postanalgesia. The mean total INF dose was 1.7 microg/kg, and the mean total i.v. morphine dose was 0.11 mg/kg. There were no serious adverse events. Intranasal fentanyl delivered as 150 microg/mL at a dose of 1.7 microg/kg was shown to be an effective analgesic in children aged 7 to 15 years presenting to an ED with an acute fracture when compared to intravenous morphine at 0.1 mg/kg.