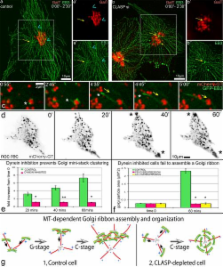 Microtubules are indispensable for Golgi complex assembly and maintenance that is an integral part of cytoplasm organization in interphase mammalian cells. Here, we show that two discrete microtubule subsets drive two distinct, yet simultaneous, stages of Golgi assembly. In addition to the radial centrosomal microtubule array, which positions the Golgi in the cell center, we identify a role for microtubules that form at the Golgi membranes in a manner dependent on microtubule regulators CLASPs. These Golgi-derived microtubules draw Golgi mini-stacks together in tangential fashion and are critical for establishing continuity and proper morphology of the Golgi complex.

We propose that specialized functions of these two microtubule arrays arise from their specific geometries. Further, we demonstrate that directional post-Golgi trafficking and cell migration depend on Golgi-associated CLASPs suggesting that correct organization of the Golgi complex by microtubules is essential for cell polarization and motility.

Beyond self-assembly: from microtubules to morphogenesis.

Janis Burkhardt,  Christophe Echeverri,  Tommy Nilsson … (1997)
Dynactin is a multisubunit complex that plays an accessory role in cytoplasmic dynein function. Overexpression in mammalian cells of one dynactin subunit, dynamitin, disrupts the complex, resulting in dissociation of cytoplasmic dynein from prometaphase kinetochores, with consequent perturbation of mitosis (Echeverri, C.J., B.M. Paschal, K.T. Vaughan, and R.B. Vallee. 1996. J. Cell Biol. 132:617–634). Based on these results, dynactin was proposed to play a role in linking cytoplasmic dynein to kinetochores and, potentially, to membrane organelles. The current study reports on the dynamitin interphase phenotype. In dynamitin-overexpressing cells, early endosomes (labeled with antitransferrin receptor), as well as late endosomes and lysosomes (labeled with anti–lysosome-associated membrane protein-1 [LAMP-1]), were redistributed to the cell periphery. This redistribution was disrupted by nocodazole, implicating an underlying plus end–directed microtubule motor activity. The Golgi stack, monitored using sialyltransferase, galactosyltransferase, and N-acetylglucosaminyltransferase I, was dramatically disrupted into scattered structures that colocalized with components of the intermediate compartment (ERGIC-53 and ERD-2). The disrupted Golgi elements were revealed by EM to represent short stacks similar to those formed by microtubule-depolymerizing agents. Golgi-to-ER traffic of stack markers induced by brefeldin A was not inhibited by dynamitin overexpression. Time-lapse observations of dynamitin-overexpressing cells recovering from brefeldin A treatment revealed that the scattered Golgi elements do not undergo microtubule-based transport as seen in control cells, but rather, remain stationary at or near their ER exit sites. These results indicate that dynactin is specifically required for ongoing centripetal movement of endocytic organelles and components of the intermediate compartment. Results similar to those of dynamitin overexpression were obtained by microinjection with antidynein intermediate chain antibody, consistent with a role for dynactin in mediating interactions of cytoplasmic dynein with specific membrane organelles. These results suggest that dynamitin plays a pivotal role in regulating organelle movement at the level of motor–cargo binding.

Asymmetric CLASP-dependent nucleation of noncentrosomal microtubules at the trans-Golgi network.

Andrey Efimov,  Alexey Kharitonov,  Nadia Efimova … (2007)
Proper organization of microtubule arrays is essential for intracellular trafficking and cell motility. It is generally assumed that most if not all microtubules in vertebrate somatic cells are formed by the centrosome. Here we demonstrate that a large number of microtubules in untreated human cells originate from the Golgi apparatus in a centrosome-independent manner. Both centrosomal and Golgi-emanating microtubules need gamma-tubulin for nucleation. Additionally, formation of microtubules at the Golgi requires CLASPs, microtubule-binding proteins that selectively coat noncentrosomal microtubule seeds. We show that CLASPs are recruited to the trans-Golgi network (TGN) at the Golgi periphery by the TGN protein GCC185. In sharp contrast to radial centrosomal arrays, microtubules nucleated at the peripheral Golgi compartment are preferentially oriented toward the leading edge in motile cells. We propose that Golgi-emanating microtubules contribute to the asymmetric microtubule networks in polarized cells and support diverse processes including post-Golgi transport to the cell front.