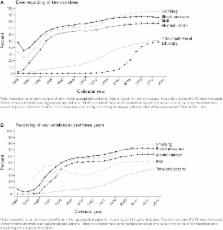 The Clinical Practice Research Datalink (CPRD) is an ongoing primary care database of anonymised medical records from general practitioners, with coverage of over 11.3 million patients from 674 practices in the UK. With 4.4 million active (alive, currently registered) patients meeting quality criteria, approximately 6.9% of the UK population are included and patients are broadly representative of the UK general population in terms of age, sex and ethnicity. General practitioners are the gatekeepers of primary care and specialist referrals in the UK. The CPRD primary care database is therefore a rich source of health data for research, including data on demographics, symptoms, tests, diagnoses, therapies, health-related behaviours and referrals to secondary care. For over half of patients, linkage with datasets from secondary care, disease-specific cohorts and mortality records enhance the range of data available for research. The CPRD is very widely used internationally for epidemiological research and has been used to produce over 1000 research studies, published in peer-reviewed journals across a broad range of health outcomes. However, researchers must be aware of the complexity of routinely collected electronic health records, including ways to manage variable completeness, misclassification and development of disease definitions for research.

Recent advances in the utility and use of the General Practice Research Database as an example of a UK Primary Care Data resource.

Susan Eaton,  Tim Williams,  S Puri … (2012)
Since its inception in the mid-1980s, the General Practice Research Database (GPRD) has undergone many changes but remains the largest validated and most utilised primary care database in the UK. Its use in pharmacoepidemiology stretches back many years with now over 800 original research papers. Administered by the Medicines and Healthcare products Regulatory Agency since 2001, the last 5 years have seen a rebuild of the database processing system enhancing access to the data, and a concomitant push towards broadening the applications of the database. New methodologies including real-world harm-benefit assessment, pharmacogenetic studies and pragmatic randomised controlled trials within the database are being implemented. A substantive and unique linkage program (using a trusted third party) has enabled access to secondary care data and disease-specific registry data as well as socio-economic data and death registration data. The utility of anonymised free text accessed in a safe and appropriate manner is being explored using simple and more complex techniques such as natural language processing.

Statins and the risk of dementia.

H Jick,  D Drachman,  S Seshadri … (2000)
Dementia affects an estimated 10% of the population older than 65 years. Because vascular and lipid-related mechanisms are thought to have a role in the pathogenesis of Alzheimer's disease and vascular dementia, we did an epidemiological study of the potential effect of HMGCoA (3 hydroxy-3methylglutaryl-coenzyme A) reductase inhibitors (statins) and other lipid-lowering agents on dementia. We used a nested case-control design with information derived from 368 practices which contribute to the UK-based General Practice Research Database. The base study population included three groups of patients age 50 years and older: all individuals who had received lipid-lowering agents (LLAs); all individuals with a clinical diagnosis of untreated hyperlipidaemia; and a randomly selected group of other individuals. From this base population, all cases with a computer-recorded clinical diagnosis of dementia were identified. Each case was matched with up to four controls derived from the base population on age, sex, practice, and index date of case. The study encompassed 284 cases with dementia and 1080 controls. Among controls 13% had untreated hyperlipidaemia, 11% were prescribed statins, 7% other LLAs, and 69% had no hyperlipidaemia or LLA exposure. The relative risk estimates of dementia adjusted for age, sex, history of coronary-artery disease, hypertension, coronary-bypass surgery and cerebral ischaemia, smoking and body mass index for individuals with untreated hyperlipidaemia (odds ratio 0.72 [95% CI 0.45-1.14]), or treated with nonstatin LLAs (0.96 [0.47-1.97], was close to 1.0 and not significant compared with people who had no diagnosis of hyperlipidaemia or exposure to other lipid-lowering drugs. The adjusted relative risk for those prescribed statins was 0.29 (0.13-0.63; p=0.002). Individuals of 50 years and older who were prescribed statins had a substantially lowered risk of developing dementia, independent of the presence or absence of untreated hyperlipidaemia, or exposure to nonstatin LLAs. The available data do not distinguish between Alzheimer's disease and other forms of dementia.

David A Springate,  Evangelos Kontopantelis,  Darren M. Ashcroft … (2014)
Lists of clinical codes are the foundation for research undertaken using electronic medical records (EMRs). If clinical code lists are not available, reviewers are unable to determine the validity of research, full study replication is impossible, researchers are unable to make effective comparisons between studies, and the construction of new code lists is subject to much duplication of effort. Despite this, the publication of clinical codes is rarely if ever a requirement for obtaining grants, validating protocols, or publishing research. In a representative sample of 450 EMR primary research articles indexed on PubMed, we found that only 19 (5.1%) were accompanied by a full set of published clinical codes and 32 (8.6%) stated that code lists were available on request. To help address these problems, we have built an online repository where researchers using EMRs can upload and download lists of clinical codes. The repository will enable clinical researchers to better validate EMR studies, build on previous code lists and compare disease definitions across studies. It will also assist health informaticians in replicating database studies, tracking changes in disease definitions or clinical coding practice through time and sharing clinical code information across platforms and data sources as research objects.