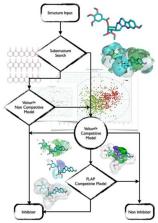 With the discovery of P-glycoprotein (P-gp), it became evident that ABC-transporters play a vital role in bioavailability and toxicity of drugs. They prevent intracellular accumulation of toxic compounds, which renders them a major defense mechanism against xenotoxic compounds. Their expression in cells of all major barriers (intestine, blood–brain barrier, blood–placenta barrier) as well as in metabolic organs (liver, kidney) also explains their influence on the ADMET properties of drugs and drug candidates. Thus, in silico models for the prediction of the probability of a compound to interact with P-gp or analogous transporters are of high value in the early phase of the drug discovery process. Within this review, we highlight recent developments in the area, with a special focus on the molecular basis of drug–transporter interaction. In addition, with the recent availability of X-ray structures of several ABC-transporters, also structure-based design methods have been applied and will be addressed.

Vasilis Vasiliou,  Konstandinos Vasiliou,  Daniel Nebert (2009)
There exist four fundamentally different classes of membrane-bound transport proteins: ion channels; transporters; aquaporins; and ATP-powered pumps. ATP-binding cassette (ABC) transporters are an example of ATP-dependent pumps. ABC transporters are ubiquitous membrane-bound proteins, present in all prokaryotes, as well as plants, fungi, yeast and animals. These pumps can move substrates in (influx) or out (efflux) of cells. In mammals, ABC transporters are expressed predominantly in the liver, intestine, blood-brain barrier, blood-testis barrier, placenta and kidney. ABC proteins transport a number of endogenous substrates, including inorganic anions, metal ions, peptides, amino acids, sugars and a large number of hydrophobic compounds and metabolites across the plasma membrane, and also across intracellular membranes. The human genome contains 49 ABC genes, arranged in eight subfamilies and named via divergent evolution. That ABC genes are important is underscored by the fact that mutations in at least I I of these genes are already known to cause severe inherited diseases (eg cystic fibrosis and X-linked adrenoleukodystrophy [X-ALD]). ABC transporters also participate in the movement of most drugs and their metabolites across cell surface and cellular organelle membranes; thus, defects in these genes can be important in terms of cancer therapy, pharmacokinetics and innumerable pharmacogenetic disorders.

Paola Vergani,  László Csanády,  David C. Gadsby (2006)
CFTR chloride channels are encoded by the gene mutated in patients with cystic fibrosis. These channels belong to the superfamily of ABC transporter ATPases. ATP-driven conformational changes, which in other ABC proteins fuel uphill substrate transport across cellular membranes, in CFTR open and close a gate to allow transmembrane flow of anions down their electrochemical gradient. New structural and biochemical information from prokaryotic ABC proteins and functional information from CFTR channels has led to a unifying mechanism explaining those ATP-driven conformational changes.

This review is part of the Advanced Drug Delivery Reviews theme issue on “ In silico ADMET predictions in pharmaceutical research”.

This is an open access article under the CC BY license ( http://creativecommons.org/licenses/by/4.0/).