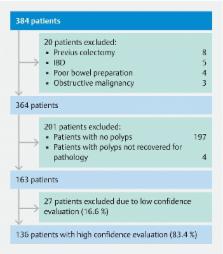 Background and study aims  Post-polypectomy surveillance interval (SI) is determined based on the number, size, and histology of colorectal polyps. Electronic chromoendoscopy in association with magnifying imaging colonoscopy allows “in vivo” polyp histology prediction. Colorectal polyps ≤ 5 mm can be resected and discarded without pathologic assessment if the endoscopic technology when used with high confidence provides ≥ 90 % agreement between the post-polypectomy SI and the SI based on pathological assessment. The aim of this study was to evaluate the agreement between the post-polypectomy SI based on flexible spectral color imaging enhancement (FICE) chromoendoscopy in association with magnified imaging and the pathology-based SI.

Patients and methods  Each diagnosed colorectal polyp received a histology prediction (neoplastic or non-neoplastic) based on the FICE capillary-vessel pattern classification. Each prediction was classified as high or low confidence. SI based on the FICE prediction was compared to the pathology-based SI recommendation according to the US Multi-Society Task Force on Colorectal Cancer guideline. Sensitivity, specificity and accuracy of FICE in diagnosing neoplastic lesions were compared with the pathology assessment. Interobserver and intraobserver agreement for FICE-based SI predictions was evaluated using the kappa coefficient.

Shinji Tanaka,  David G. Hewett,  Douglas Rex … (2012)
Almost all colorectal polyps ≤ 5 mm are benign, yet current practice requires costly pathologic analysis. We aimed to develop and evaluate the validity of a simple narrow-band imaging (NBI)-based classification system for differentiating hyperplastic from adenomatous polyps. The study was conducted in 4 phases: (1) evaluation of accuracy and reliability of histologic prediction by NBI-experienced colonoscopists; (2) development of a classification based on color, vessels, and surface pattern criteria, using a modified Delphi method; (3) validation of the component criteria by people not experienced in endoscopy or NBI analysis (25 medical students, 19 gastroenterology fellows) using 118 high-definition colorectal polyp images of known histology; and (4) validation of the classification system by NBI-trained gastroenterology fellows, using still images. We performed a pilot evaluation during real-time colonoscopy. We developed a classification system for the endoscopic diagnosis of colorectal polyp histology and established its predictive validity. When all 3 criteria were used, the specificity ranged from 94.9% to 100% and the combined sensitivity ranged from 8.5% to 61.0%. The specificities of the individual criteria were lower although the sensitivities were higher. During real-time colonoscopy, endoscopists made diagnoses with high confidence for 75% of consecutive small colorectal polyps, with 89% accuracy, 98% sensitivity, and 95% negative predictive values. We developed and established the validity of an NBI classification system that can be used to diagnose colorectal polyps. In preliminary real-time evaluation, the system allowed endoscopic diagnoses of colorectal polyp histology. Copyright © 2012 AGA Institute. Published by Elsevier Inc. All rights reserved.

The American Society for Gastrointestinal Endoscopy PIVI (Preservation and Incorporation of Valuable Endoscopic Innovations) on real-time endoscopic assessment of the histology of diminutive colorectal polyps.

Douglas Rex,  Charles Kahi,  Michael V O'brien … (2011)
The PIVI (Preservation and Incorporation of Valuable endoscopic Innovations) initiative is an ASGE program whose objectives are to identify important clinical questions related to endoscopy and to establish a priori diagnostic and/or therapeutic thresholds for endoscopic technologies designed to resolve these clinical questions. Additionally, PIVIs may also outline the data and or the research study design required for proving an established threshold is met. Once endoscopic technologies meet an established PIVI threshold, those technologies are appropriate to incorporate into clinical practice presuming the appropriate training in that endoscopic technology has been achieved. The ASGE encourages and supports the appropriate use of technologies that meet its established PIVI thresholds. The PIVI initiative was developed primarily to direct endoscopic technology development toward resolving important clinical issues in endoscopy. The PIVI initiative is also designed to minimize the possibility that potentially valuable innovations are prematurely abandoned due to lack of utilization and to avoid widespread use of an endoscopic technology before clinical studies documenting their effectiveness have been performed. The following document, or PIVI, is one of a series of statements defining the diagnostic or therapeutic threshold that must be met for a technique or device to become considered appropriate for incorporation into clinical practice. It is also meant to serve as a guide for researchers or those seeking to develop technologies that are designed to improve digestive health outcomes. An ad hoc committee under the auspices of the existing ASGE Technology and Standards of Practice Committees Chairs develops PIVIs. An expert in the subject area chairs the PIVI, with additional committee members chosen for their individual expertise. In preparing this document, evidence-based methodology was employed, using a MEDLINE and PubMed literature search to identify pertinent clinical studies on the topic. PIVIs are ultimately submitted to the ASGE Governing Board for approval, as is done for all Technology and Standards of Practice documents. This document is provided solely for educational and informational purposes and to support incorporating these endoscopic technologies into clinical practice. It should not be construed as establishing a legal standard of care. Copyright © 2011. Published by Mosby, Inc.