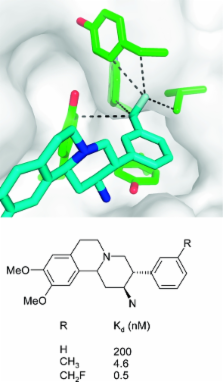 Fluorine in pharmaceuticals: looking beyond intuition.

K. Müller,  C. Faeh,  F Diederich (2007)
Fluorine substituents have become a widespread and important drug component, their introduction facilitated by the development of safe and selective fluorinating agents. Organofluorine affects nearly all physical and adsorption, distribution, metabolism, and excretion properties of a lead compound. Its inductive effects are relatively well understood, enhancing bioavailability, for example, by reducing the basicity of neighboring amines. In contrast, exploration of the specific influence of carbon-fluorine single bonds on docking interactions, whether through direct contact with the protein or through stereoelectronic effects on molecular conformation of the drug, has only recently begun. Here, we review experimental progress in this vein and add complementary analysis based on comprehensive searches in the Cambridge Structural Database and the Protein Data Bank.

Joseph S. Murray,  P Politzer,  Timothy Clark … (2007)
Halogen bonding refers to the non-covalent interactions of halogen atoms X in some molecules, RX, with negative sites on others. It can be explained by the presence of a region of positive electrostatic potential, the sigma-hole, on the outermost portion of the halogen's surface, centered on the R-X axis. We have carried out a natural bond order B3LYP analysis of the molecules CF(3)X, with X = F, Cl, Br and I. It shows that the Cl, Br and I atoms in these molecules closely approximate the [Formula: see text] configuration, where the z-axis is along the R-X bond. The three unshared pairs of electrons produce a belt of negative electrostatic potential around the central part of X, leaving the outermost region positive, the sigma-hole. This is not found in the case of fluorine, for which the combination of its high electronegativity plus significant sp-hybridization causes an influx of electronic charge that neutralizes the sigma-hole. These factors become progressively less important in proceeding to Cl, Br and I, and their effects are also counteracted by the presence of electron-withdrawing substituents in the remainder of the molecule. Thus a sigma-hole is observed for the Cl in CF(3)Cl, but not in CH(3)Cl.

This is an open-access article distributed under the ACS AuthorChoice Terms & Conditions. Any use of this article, must conform to the terms of that license which are available at http://pubs.acs.org.