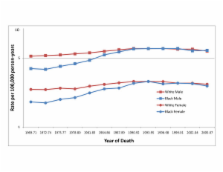 Annual Report to the Nation on the Status of Cancer, 1975–2005, Featuring Trends in Lung Cancer, Tobacco Use, and Tobacco Control

Ahmedin Jemal,  Michael Thun,  Lynn A. G. Ries … (2008)
Background The American Cancer Society, the Centers for Disease Control and Prevention (CDC), the National Cancer Institute (NCI), and the North American Association of Central Cancer Registries (NAACCR) collaborate annually to provide updated information on cancer occurrence and trends in the United States. This year’s report includes trends in lung cancer incidence and death rates, tobacco use, and tobacco control by state of residence. Methods Information on invasive cancers was obtained from the NCI, CDC, and NAACCR and information on mortality from the CDC's National Center for Health Statistics. Annual percentage changes in the age-standardized incidence and death rates (2000 US population standard) for all cancers combined and for the top 15 cancers were estimated by joinpoint analysis of long-term (1975–2005) trends and by least squares linear regression of short-term (1996–2005) trends. All statistical tests were two-sided. Results Both incidence and death rates from all cancers combined decreased statistically significantly (P < .05) in men and women overall and in most racial and ethnic populations. These decreases were driven largely by declines in both incidence and death rates for the three most common cancers in men (lung, colorectum, and prostate) and for two of the three leading cancers in women (breast and colorectum), combined with a leveling off of lung cancer death rates in women. Although the national trend in female lung cancer death rates has stabilized since 2003, after increasing for several decades, there is prominent state and regional variation. Lung cancer incidence and/or death rates among women increased in 18 states, 16 of them in the South or Midwest, where, on average, the prevalence of smoking was higher and the annual percentage decrease in current smoking among adult women was lower than in the West and Northeast. California was the only state with decreasing lung cancer incidence and death rates in women. Conclusions Although the decrease in overall cancer incidence and death rates is encouraging, large state and regional differences in lung cancer trends among women underscore the need to maintain and strengthen many state tobacco control programs.

The genetic basis of kidney cancer: a metabolic disease.

Rebekah Schmidt,  W Linehan,  Ramaprasad Srinivasan (2010)
Kidney cancer is not a single disease but comprises a number of different types of cancer that occur in the kidney, each caused by a different gene with a different histology and clinical course that responds differently to therapy. Each of the seven known kidney cancer genes, VHL, MET, FLCN, TSC1, TSC2, FH and SDH, is involved in pathways that respond to metabolic stress or nutrient stimulation. The VHL protein is a component of the oxygen and iron sensing pathway that regulates hypoxia-inducible factor (HIF) levels in the cell. HGF-MET signaling affects the LKB1-AMPK energy sensing cascade. The FLCN-FNIP1-FNIP2 complex binds AMPK and, therefore, might interact with the cellular energy and nutrient sensing pathways AMPK-TSC1/2-mTOR and PI3K-Akt-mTOR. TSC1-TSC2 is downstream of AMPK and negatively regulates mTOR in response to cellular energy deficit. FH and SDH have a central role in the mitochondrial tricarboxylic acid cycle, which is coupled to energy production through oxidative phosphorylation. Mutations in each of these kidney cancer genes result in dysregulation of metabolic pathways involved in oxygen, iron, energy or nutrient sensing, suggesting that kidney cancer is a disease of cell metabolism. Targeting the fundamental metabolic abnormalities in kidney cancer provides a unique opportunity for the development of more-effective forms of therapy for this disease.

Cancer incidence before and after kidney transplantation.

Michael P. McDonald,  M R E McCredie,  Thorbald van Hall … (2006)
Immune suppression after organ transplantation is associated with a markedly increased risk of nonmelanoma skin cancer and a few virus-associated cancers. Although it is generally accepted that other cancers do not occur at increased rates, there have been few long-term population-based cohort studies performed. To compare the incidence of cancer in patients receiving immune suppression after kidney transplantation with incidence in the same population in 2 periods before receipt of immune suppression: during dialysis and during end-stage kidney disease before renal replacement therapy (RRT). A population-based cohort study of 28,855 patients with end-stage kidney disease who received RRT, with 273,407 person-years of follow-up. Incident cancers (1982-2003) were ascertained by record linkage between the Australia and New Zealand Dialysis and Transplant Registry and the Australian National Cancer Statistics Clearing House. Standardized incidence ratios (SIRs) of cancer, using age-specific, sex-specific, calendar year-specific, and state/territory-specific population cancer incidence rates. The overall incidence of cancer, excluding nonmelanoma skin cancer and those cancers known to frequently cause end-stage kidney disease, was markedly increased after transplantation (n = 1236; SIR, 3.27; 95% confidence interval [CI], 3.09-3.46). In contrast, cancer incidence was only slightly increased during dialysis (n = 870; SIR, 1.35; 95% CI, 1.27-1.45) and before RRT (n = 689; SIR, 1.16; 95% CI, 1.08-1.25). After transplantation, cancer occurred at significantly increased incidence at 25 sites, and risk exceeded 3-fold at 18 of these sites. Most of these cancers were of known or suspected viral etiology. Kidney transplantation is associated with a marked increase in cancer risk at a wide variety of sites. Because SIRs for most types of cancer were not increased before transplantation, immune suppression may be responsible for the increased risk. These data suggest a broader than previously appreciated role of the interaction between the immune system and common viral infections in the etiology of cancer.