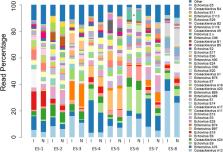 Global poliovirus surveillance involves virus isolation from stool and environmental samples, intratypic differential (ITD) by PCR, and sequencing of the VP1 region to distinguish vaccine (Sabin), vaccine-derived, and wild-type polioviruses and to ensure an appropriate response. This cell culture algorithm takes 2 to 3 weeks on average between sample receipt and sequencing. Direct detection of viral RNA using PCR allows faster detection but has traditionally faced challenges related to poor sensitivity and difficulties in sequencing common samples containing poliovirus and enterovirus mixtures. We present a nested PCR and nanopore sequencing protocol that allows rapid (<3 days) and sensitive direct detection and sequencing of polioviruses in stool and environmental samples. We developed barcoded primers and a real-time analysis platform that generate accurate VP1 consensus sequences from multiplexed samples. The sensitivity and specificity of our protocol compared with those of cell culture were 90.9% (95% confidence interval, 75.7% to 98.1%) and 99.2% (95.5% to 100.0%) for wild-type 1 poliovirus, 92.5% (79.6% to 98.4%) and 98.7% (95.4% to 99.8%) for vaccine and vaccine-derived serotype 2 poliovirus, and 88.3% (81.2% to 93.5%) and 93.2% (88.6% to 96.3%) for Sabin 1 and 3 poliovirus alone or in mixtures when tested on 155 stool samples in Pakistan. Variant analysis of sequencing reads also allowed the identification of polioviruses and enteroviruses in artificial mixtures and was able to distinguish complex mixtures of polioviruses in environmental samples. The median identity of consensus nanopore sequences with Sanger or Illumina sequences from the same samples was >99.9%. This novel method shows promise as a faster and safer alternative to cell culture for the detection and real-time sequencing of polioviruses in stool and environmental samples.

Jacob John,  Sidhartha Giri,  Arun S Karthikeyan … (2014)
Intestinal immunity induced by oral poliovirus vaccine (OPV) is imperfect and wanes with time, permitting transmission of infection by immunised children. Inactivated poliovirus vaccine (IPV) does not induce an intestinal mucosal immune response, but could boost protection in children who are mucosally primed through previous exposure to OPV. We aimed to assess the effect of IPV on intestinal immunity in children previously vaccinated with OPV.

The Evolutionary Pathway to Virulence of an RNA Virus

The role of older children and adults in wild poliovirus transmission.

Steven G F Wassilak,  Isobel M. Blake,  Rebecca K. Martin … (2014)
As polio eradication inches closer, the absence of poliovirus circulation in most of the world and imperfect vaccination coverage are resulting in immunity gaps and polio outbreaks affecting adults. Furthermore, imperfect, waning intestinal immunity among older children and adults permits reinfection and poliovirus shedding, prompting calls to extend the age range of vaccination campaigns even in the absence of cases in these age groups. The success of such a strategy depends on the contribution to poliovirus transmission by older ages, which has not previously been estimated. We fit a mathematical model of poliovirus transmission to time series data from two large outbreaks that affected adults (Tajikistan 2010, Republic of Congo 2010) using maximum-likelihood estimation based on iterated particle-filtering methods. In Tajikistan, the contribution of unvaccinated older children and adults to transmission was minimal despite a significant number of cases in these age groups [reproduction number, R = 0.46 (95% confidence interval, 0.42-0.52) for >5-y-olds compared to 2.18 (2.06-2.45) for 0- to 5-y-olds]. In contrast, in the Republic of Congo, the contribution of older children and adults was significant [R = 1.85 (1.83-4.00)], perhaps reflecting sanitary and socioeconomic variables favoring efficient virus transmission. In neither setting was there evidence for a significant role of imperfect intestinal immunity in the transmission of poliovirus. Bringing the immunization response to the Tajikistan outbreak forward by 2 wk would have prevented an additional 130 cases (21%), highlighting the importance of early outbreak detection and response.