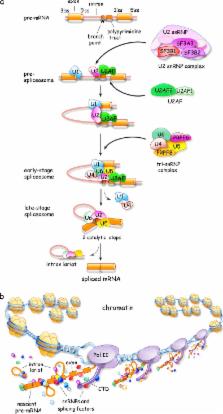 Examples of associations between human disease and defects in pre–messenger RNA splicing/alternative splicing are accumulating. Although many alterations are caused by mutations in splicing signals or regulatory sequence elements, recent studies have noted the disruptive impact of mutated generic spliceosome components and splicing regulatory proteins. This review highlights recent progress in our understanding of how the altered splicing function of RNA-binding proteins contributes to myelodysplastic syndromes, cancer, and neuropathologies.

Cyriac Kandoth,  Michael D. McLellan,  Fabio Vandin … (2013)
The Cancer Genome Atlas (TCGA) has used the latest sequencing and analysis methods to identify somatic variants across thousands of tumours. Here we present data and analytical results for point mutations and small insertions/deletions from 3,281 tumours across 12 tumour types as part of the TCGA Pan-Cancer effort. We illustrate the distributions of mutation frequencies, types and contexts across tumour types, and establish their links to tissues of origin, environmental/carcinogen influences, and DNA repair defects. Using the integrated data sets, we identified 127 significantly mutated genes from well-known(forexample, mitogen-activatedprotein kinase, phosphatidylinositol-3-OH kinase,Wnt/β-catenin and receptor tyrosine kinase signalling pathways, and cell cycle control) and emerging (for example, histone, histone modification, splicing, metabolism and proteolysis) cellular processes in cancer. The average number of mutations in these significantly mutated genes varies across tumour types; most tumours have two to six, indicating that the numberof driver mutations required during oncogenesis is relatively small. Mutations in transcriptional factors/regulators show tissue specificity, whereas histone modifiers are often mutated across several cancer types. Clinical association analysis identifies genes having a significant effect on survival, and investigations of mutations with respect to clonal/subclonal architecture delineate their temporal orders during tumorigenesis. Taken together, these results lay the groundwork for developing new diagnostics and individualizing cancer treatment.

Epithelial-mesenchymal transition: at the crossroads of development and tumor metastasis.

Robert A. Weinberg,  Jing Yang,  Clarice R. Weinberg (2008)
The epithelial-mesenchymal transition is a highly conserved cellular program that allows polarized, immotile epithelial cells to convert to motile mesenchymal cells. This important process was initially recognized during several critical stages of embryonic development and has more recently been implicated in promoting carcinoma invasion and metastasis. In this review, we summarize and compare major signaling pathways that regulate the epithelial-mesenchymal transitions during both development and tumor metastasis. Studies in both fields are critical for our molecular understanding of cell migration and morphogenesis.

The M2 splice isoform of pyruvate kinase is important for cancer metabolism and tumour growth.

Heather Christofk,  Matthew Vander Heiden,  Marian Harris … (2008)
Many tumour cells have elevated rates of glucose uptake but reduced rates of oxidative phosphorylation. This persistence of high lactate production by tumours in the presence of oxygen, known as aerobic glycolysis, was first noted by Otto Warburg more than 75 yr ago. How tumour cells establish this altered metabolic phenotype and whether it is essential for tumorigenesis is as yet unknown. Here we show that a single switch in a splice isoform of the glycolytic enzyme pyruvate kinase is necessary for the shift in cellular metabolism to aerobic glycolysis and that this promotes tumorigenesis. Tumour cells have been shown to express exclusively the embryonic M2 isoform of pyruvate kinase. Here we use short hairpin RNA to knockdown pyruvate kinase M2 expression in human cancer cell lines and replace it with pyruvate kinase M1. Switching pyruvate kinase expression to the M1 (adult) isoform leads to reversal of the Warburg effect, as judged by reduced lactate production and increased oxygen consumption, and this correlates with a reduced ability to form tumours in nude mouse xenografts. These results demonstrate that M2 expression is necessary for aerobic glycolysis and that this metabolic phenotype provides a selective growth advantage for tumour cells in vivo.