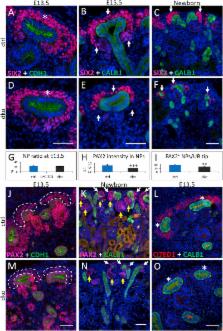 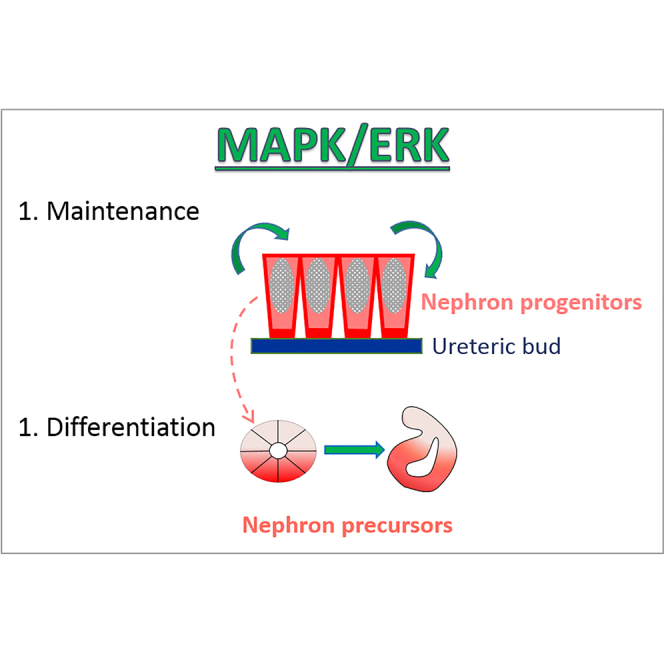 In this article, Ihermann-Hella and colleagues show that MAPK/ERK activity, typically altered in several cancers, plays a dual function in regulation of embryonic nephron progenitors. MAPK/ERK activity maintains nephron progenitors within their in vivo niche by regulating PAX2 and ITGA8, and fosters nephrogenesis in early differentiating nephrons. Utilization of these findings may substantially improve prospective iPSC-derived kidney organoid differentiation.

M Todd Valerius,  Guillermo Oliver,  Shannon McMahon … (2008)
Nephrons, the basic functional units of the kidney, are generated repetitively during kidney organogenesis from a mesenchymal progenitor population. Which cells within this pool give rise to nephrons and how multiple nephron lineages form during this protracted developmental process are unclear. We demonstrate that the Six2-expressing cap mesenchyme represents a multipotent nephron progenitor population. Six2-expressing cells give rise to all cell types of the main body of the nephron during all stages of nephrogenesis. Pulse labeling of Six2-expressing nephron progenitors at the onset of kidney development suggests that the Six2-expressing population is maintained by self-renewal. Clonal analysis indicates that at least some Six2-expressing cells are multipotent, contributing to multiple domains of the nephron. Furthermore, Six2 functions cell autonomously to maintain a progenitor cell status, as cap mesenchyme cells lacking Six2 activity contribute to ectopic nephron tubules, a mechanism dependent on a Wnt9b inductive signal. Taken together, our observations suggest that Six2 activity cell-autonomously regulates a multipotent nephron progenitor population.

Integrating signals from RTKs to ERK/MAPK.

Carl Morrison,  Colette M. McKay (2007)
Signals received at the cell surface must be properly transmitted to critical targets within the cell to achieve the appropriate biological response. This process of signal transduction is often initiated by receptor tyrosine kinases (RTKs), which function as entry points for many extracellular cues and play a critical role in recruiting the intracellular signaling cascades that orchestrate a particular response. Essential for most RTK-mediated signaling is the engagement and activation of the mitogen-activated protein kinase (MAPK) cascade comprised of the Raf, MEK and extracellular signal-regulated kinase (ERK) kinases. For many years, it was thought that signaling from RTKs to ERK occurred only at the plasma membrane and was mediated by a simple, linear Ras-dependent pathway. However, the limitation of this model became apparent with the discovery that Ras and ERK can be activated at various intracellular compartments, and that RTKs can modulate Ras/ERK signaling from these sites. Moreover, ERK scaffolding proteins and signaling modulators have been identified that play critical roles in determining the strength, duration and location of RTK-mediated ERK signaling. Together, these factors contribute to the diversity of biological responses generated by RTK signaling.