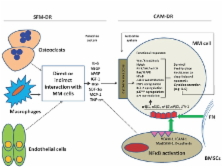 In the era of new and mostly effective therapeutic protocols, multiple myeloma still tends to be a hard-to-treat hematologic cancer. This hallmark of the disease is in fact a sequel to drug resistant phenotypes persisting initially or emerging in the course of treatment. Furthermore, the heterogeneous nature of multiple myeloma makes treating patients with the same drug challenging because finding a drugable oncogenic process common to all patients is not yet feasible, while our current knowledge of genetic/epigenetic basis of multiple myeloma pathogenesis is outstanding. Nonetheless, bone marrow microenvironment components are well known as playing critical roles in myeloma tumor cell survival and environment-mediated drug resistance happening most possibly in all myeloma patients. Generally speaking, however; real mechanisms underlying drug resistance in multiple myeloma are not completely understood. The present review will discuss the latest findings and concepts in this regard. It reviews the association of important chromosomal translocations, oncogenes (e.g. TP53) mutations and deranged signaling pathways (e.g. NFκB) with drug response in clinical and experimental investigations. It will also highlight how bone marrow microenvironment signals (Wnt, Notch) and myeloma cancer stem cells could contribute to drug resistance in multiple myeloma.

Cancer genes and the pathways they control.

W Kinzler,  Bert Vogelstein,  K Kinzler (2004)
The revolution in cancer research can be summed up in a single sentence: cancer is, in essence, a genetic disease. In the last decade, many important genes responsible for the genesis of various cancers have been discovered, their mutations precisely identified, and the pathways through which they act characterized. The purposes of this review are to highlight examples of progress in these areas, indicate where knowledge is scarce and point out fertile grounds for future investigation.

Hypomethylation distinguishes genes of some human cancers from their normal counterparts.

Andrew Feinberg,  Bert Vogelstein (1983)
It has been suggested that cancer represents an alteration in DNA, heritable by progeny cells, that leads to abnormally regulated expression of normal cellular genes; DNA alterations such as mutations, rearrangements and changes in methylation have been proposed to have such a role. Because of increasing evidence that DNA methylation is important in gene expression (for review see refs 7, 9-11), several investigators have studied DNA methylation in animal tumours, transformed cells and leukaemia cells in culture. The results of these studies have varied; depending on the techniques and systems used, an increase, decrease, or no change in the degree of methylation has been reported. To our knowledge, however, primary human tumour tissues have not been used in such studies. We have now examined DNA methylation in human cancer with three considerations in mind: (1) the methylation pattern of specific genes, rather than total levels of methylation, was determined; (2) human cancers and adjacent analogous normal tissues, unconditioned by culture media, were analysed; and (3) the cancers were taken from patients who had received neither radiation nor chemotherapy. In four of five patients studied, representing two histological types of cancer, substantial hypomethylation was found in genes of cancer cells compared with their normal counterparts. This hypomethylation was progressive in a metastasis from one of the patients.

The molecular classification of multiple myeloma.

Mauricio Pineda-Roman,  Jeffrey Sawyer,  E. J. Anaissie … (2006)
To better define the molecular basis of multiple myeloma (MM), we performed unsupervised hierarchic clustering of mRNA expression profiles in CD138-enriched plasma cells from 414 newly diagnosed patients who went on to receive high-dose therapy and tandem stem cell transplants. Seven disease subtypes were validated that were strongly influenced by known genetic lesions, such as c-MAF- and MAFB-, CCND1- and CCND3-, and MMSET-activating translocations and hyperdiploidy. Indicative of the deregulation of common pathways by gene orthologs, common gene signatures were observed in cases with c-MAF and MAFB activation and CCND1 and CCND3 activation, the latter consisting of 2 subgroups, one characterized by expression of the early B-cell markers CD20 and PAX5. A low incidence of focal bone disease distinguished one and increased expression of proliferation-associated genes of another novel subgroup. Comprising varying fractions of each of the other 6 subgroups, the proliferation subgroup dominated at relapse, suggesting that this signature is linked to disease progression. Proliferation and MMSET-spike groups were characterized by significant overexpression of genes mapping to chromosome 1q, and both exhibited a poor prognosis relative to the other groups. A subset of cases with a predominating myeloid gene expression signature, excluded from the profiling analyses, had more favorable baseline characteristics and superior prognosis to those lacking this signature.