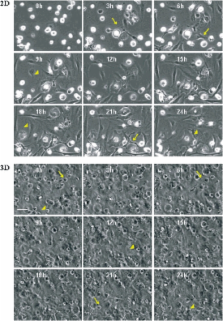 A major impediment to CNS repair is the glial scar, which forms following damage and is composed mainly of ramified, ‘reactive’ astrocytes that inhibit neuronal regrowth. The transition of astrocytes into this reactive phenotype (reactive gliosis) is a potential therapeutic target, but glial scar formation has proved difficult to study in monolayer cultures because they induce constitutive astrocyte activation. Here we demonstrate a 3D collagen gel system in which primary rat astrocytes were maintained in a persistently less reactive state than comparable cells in monolayer, resembling their status in the undamaged CNS. Reactivity, proliferation and viability were monitored and quantified using confocal, fluorescence and time-lapse microscopy, 3D image analysis, RT–PCR and ELISA. To assess the potential of this system as a model of reactive gliosis, astrocytes in 3D were activated with TGFβ1 to a ramified, reactive phenotype (elevated GFAP, Aquaporin 4, CSPG, Vimentin and IL-6 secretion). This provides a versatile system in which astrocytes can be maintained in a resting state, then be triggered to undergo reactive gliosis, enabling real-time monitoring and quantitative analysis throughout and providing a powerful new tool for research into CNS damage and repair. Copyright © 2009 John Wiley & Sons, Ltd.

Ilya N Kotov,  Jungwoo Lee,  Robert M. Cuddihy (2008)
Traditional methods of cell growth and manipulation on 2-dimensional (2D) surfaces have been shown to be insufficient for new challenges of cell biology and biochemistry, as well as in pharmaceutical assays. Advances in materials chemistry, materials fabrication and processing technologies, and developmental biology have led to the design of 3D cell culture matrices that better represent the geometry, chemistry, and signaling environment of natural extracellular matrix. In this review, we present the status of state-of-the-art 3D cell-growth techniques and scaffolds and analyze them from the perspective of materials properties, manufacturing, and functionality. Particular emphasis was placed on tissue engineering and in vitro modeling of human organs, where we see exceptionally strong potential for 3D scaffolds and cell-growth methods. We also outline key challenges in this field and most likely directions for future development of 3D cell culture over the period of 5-10 years.

Matrices with compliance comparable to that of brain tissue select neuronal over glial growth in mixed cortical cultures.

P. Georges,  Robert Miller,  E Sawyer … (2006)
Cortical neurons and astrocytes respond strongly to changes in matrix rigidity when cultured on flexible substrates. In this study, existing polyacrylamide gel polymerization methods were modified into a novel method for making substrates capable of engaging specific cell-adhesion receptors. Embryonic cortical dissociations were cultured on polyacrylamide or fibrin gel scaffolds of varying compliance. On soft gels, astrocytes do not spread and have disorganized F-actin compared to the cytoskeletons of astrocytes on hard surfaces. Neurons, however, extend long neurites and polymerize actin filaments on both soft and hard gels. Compared to tissue culture plastic or stiff gel substrates coated with laminin, on which astrocytes overgrow neurons in mixed cultures, laminin-coated soft gels encourage attachment and growth of neurons while suppressing astrocyte growth. The number of astrocytes on soft gels is lower than on hard even in the absence of mitotic inhibitors normally used to temper the astrocyte population. Dissociated embryonic rat cortices grown on flexible fibrin gels, a biomaterial with potential use as an implant material, display a similar mechano-dependent difference in cell population. The stiffness of materials required for optimal neuronal growth, characterized by an elastic modulus of several hundred Pa, is in the range measured for intact rat brain. Together, these data emphasize the potential importance of material substrate stiffness as a design feature in the next generation of biomaterials intended to promote neuronal regeneration across a lesion in the central nervous system while simultaneously minimizing the ingrowth of astrocytes into the lesion area.

M Papadopoulos,  Donghong Yan,  Hiroyuki Watanabe … (2005)
Aquaporin-4, the major water-selective channel in astroglia throughout the central nervous system, facilitates water movement into and out of the brain. Here, we identify a novel role for aquaporin-4 in astroglial cell migration, as occurs during glial scar formation. Astroglia cultured from the neocortex of aquaporin-4-null mice had similar morphology, proliferation and adhesion, but markedly impaired migration determined by Transwell migration efficiency (18+/-2 vs 58+/-4% of cells migrated towards 10% serum in 8 hours; P<0.001) and wound healing rate (4.6 vs 7.0 microm/hour speed of wound edge; P<0.001) compared with wild-type mice. Transwell migration was similarly impaired (25+/-4% migrated cells) in wild-type astroglia after approximately 90% reduction in aquaporin-4 protein expression by RNA inhibition. Aquaporin-4 was polarized to the leading edge of the plasma membrane in migrating wild-type astroglia, where rapid shape changes were seen by video microscopy. Astroglial cell migration was enhanced by a small extracellular osmotic gradient, suggesting that aquaporin-4 facilitates water influx across the leading edge of a migrating cell. In an in vivo model of reactive gliosis and astroglial cell migration produced by cortical stab injury, glial scar formation was remarkably impaired in aquaporin-4-null mice, with reduced migration of reactive astroglia towards the site of injury. Our findings provide evidence for the involvement of aquaporin-4 in astroglial cell migration, which occurs during glial scar formation in brain injury, stroke, tumor and focal abscess.