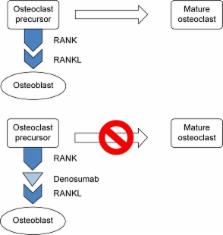 Hypercalcemia of malignancy affects up to one in five cancer patients during the course of their disease. It is associated with both liquid malignancies, commonly multiple myeloma, leukemia, and non-Hodgkins lymphoma and solid cancers, particularly breast and renal carcinomas as well as squamous cell carcinomas of any organ. The clinical manifestations of hypercalcemia are generally constitutional in nature and not specific to the inciting malignancy. Such physical manifestations can range from malaise to lethargy and confusion. Constipation and anorexia are common. Acute kidney injury is likely the most frequently encountered manifestation of end organ damage. Symptomatology is closely linked to both the absolute elevation of serum calcium levels and the rapidity of calcium rise. The majority of cases are humoral in etiology and related to parathyroid hormone-related protein (PTHrP). Approximately 20% of cases are the result of direct bone metastasis with extra-renal 1,25-dihydroxyvitamin D (calcitriol) and ectopic parathyroid hormone production likely accounting for less than 1% of cases. The diagnosis of hypercalcemia of malignancy is confirmed either by an elevated PTHrP or by an evidence of bone metastasis in the appropriate clinical setting. Treatment is predicated on the patient’s symptoms and absolute serum calcium level. Interventions are aimed at lowering the serum calcium concentration by inhibiting bone resorption and increasing urinary calcium excretion, the former accomplished via bisphosphonate therapy and the latter with aggressive hydration. Novel therapies for refractory disease include denosumab, a monoclonal antibody against the receptor activator of nuclear factor κB ligand, and the calcimimetic cinacalcet. Finally, anti-PTHrP antibodies have been successfully deployed in animal models of disease. Despite the efficacy of the above therapies, hypercalcemia of malignancy portends an ominous prognosis, indicating advanced and often refractory cancer with survival on the order of months.

Cellular and molecular mechanisms of action of bisphosphonates.

Alex D. Rogers,  Chris Frith,  Marnita Benford … (2000)
Bisphosphonates currently are the most important class of antiresorptive agents used in the treatment of metabolic bone diseases, including tumor-associated osteolysis and hypercalcemia, Paget's disease, and osteoporosis. These compounds have high affinity for calcium and therefore target to bone mineral, where they appear to be internalized selectively by bone-resorbing osteoclasts and inhibit osteoclast function. This article reviews the pharmacology of bisphosphonates and the relation between the chemical structure of bisphosphonates and antiresorptive potency, and describes recent new discoveries of their molecular mechanisms of action in osteoclasts. Bisphosphonates can be grouped into two pharmacologic classes with distinct molecular mechanisms of action. Nitrogen-containing bisphosphonates (the most potent class) act by inhibiting the mevalonate pathway in osteoclasts, thereby preventing prenylation of small GTPase signaling proteins required for osteoclast function. Bisphosphonates that lack a nitrogen in the chemical structure do not inhibit protein prenylation and have a different mode of action that may involve the formation of cytotoxic metabolites in osteoclasts or inhibition of protein tyrosine phosphatases. Bisphosphonates are highly effective inhibitors of bone resorption that selectively affect osteoclasts. After more than 30 years of clinical use, their molecular mechanisms of action are only just becoming clear.

Structure-activity relationships for inhibition of farnesyl diphosphate synthase in vitro and inhibition of bone resorption in vivo by nitrogen-containing bisphosphonates.