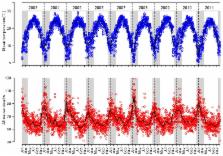 A significant increase in mortality was observed during cold winters in many temperate regions. However, there is a lack of evidence from tropical and subtropical regions, and the influence of ambient temperatures on seasonal variation of mortality was not well documented.

This study included 213,737 registered deaths from January 2003 to December 2011 in Guangzhou, a subtropical city in Southern China. Excess winter mortality was calculated by the excess percentage of monthly mortality in winters over that of non-winter months. A generalized linear model with a quasi-Poisson distribution was applied to analyze the association between monthly mean temperature and mortality, after controlling for other meteorological measures and air pollution.

The mortality rate in the winter was 26% higher than the average rate in other seasons. On average, there were 1,848 excess winter deaths annually, with around half (52%) from cardiovascular diseases and a quarter (24%) from respiratory diseases. Excess winter mortality was higher in the elderly, females and those with low education level than the young, males and those with high education level, respectively. A much larger winter increase was observed in out-of-hospital mortality compared to in-hospital mortality (45% vs. 17%). We found a significant negative correlation of annual excess winter mortality with average winter temperature (r s=-0.738, P=0.037), but not with air pollution levels. A 1 °C decrease in monthly mean temperature was associated with an increase of 1.38% (95%CI:0.34%-2.40%) and 0.88% (95%CI:0.11%-1.64%) in monthly mortality at lags of 0-1 month, respectively.

Similar to temperate regions, a subtropical city Guangzhou showed a clear seasonal pattern in mortality, with a sharper spike in winter. Our results highlight the role of cold temperature on the winter mortality even in warm climate. Precautionary measures should be strengthened to mitigate cold-related mortality for people living in warm climate.

Heat-related and cold-related deaths in England and Wales: who is at risk?

S Hajat,  K Lachowycz,  R Sari Kovats (2007)
Despite the high burden from exposure to both hot and cold weather each year in England and Wales, there has been relatively little investigation on who is most at risk, resulting in uncertainties in informing government interventions. To determine the subgroups of the population that are most vulnerable to heat-related and cold-related mortality. Ecological time-series study of daily mortality in all regions of England and Wales between 1993 and 2003, with postcode linkage of individual deaths to a UK database of all care and nursing homes, and 2001 UK census small-area indicators. A risk of mortality was observed for both heat and cold exposure in all regions, with the strongest heat effects in London and strongest cold effects in the Eastern region. For all regions, a mean relative risk of 1.03 (95% confidence interval (CI) 1.02 to 1.03) was estimated per degree increase above the heat threshold, defined as the 95th centile of the temperature distribution in each region, and 1.06 (95% CI 1.05 to 1.06) per degree decrease below the cold threshold (set at the 5th centile). Elderly people, particularly those in nursing and care homes, were most vulnerable. The greatest risk of heat mortality was observed for respiratory and external causes, and in women, which remained after control for age. Vulnerability to either heat or cold was not modified by deprivation, except in rural populations where cold effects were slightly stronger in more deprived areas. Interventions to reduce vulnerability to both hot and cold weather should target all elderly people. Specific interventions should also be developed for people in nursing and care homes as heat illness is easily preventable.

Effects of cold weather on mortality: results from 15 European cities within the PHEWE project.

Benjamin Goodman,  Jordi Sunyer,  P Michelozzi … (2008)
Weather-related health effects have attracted renewed interest because of the observed and predicted climate change. The authors studied the short-term effects of cold weather on mortality in 15 European cities. The effects of minimum apparent temperature on cause- and age-specific daily mortality were assessed for the cold season (October-March) by using data from 1990-2000. For city-specific analysis, the authors used Poisson regression and distributed lag models, controlling for potential confounders. Meta-regression models summarized the results and explored heterogeneity. A 1 degrees C decrease in temperature was associated with a 1.35% (95% confidence interval (CI): 1.16, 1.53) increase in the daily number of total natural deaths and a 1.72% (95% CI: 1.44, 2.01), 3.30% (95% CI: 2.61, 3.99), and 1.25% (95% CI: 0.77, 1.73) increase in cardiovascular, respiratory, and cerebrovascular deaths, respectively. The increase was greater for the older age groups. The cold effect was found to be greater in warmer (southern) cities and persisted up to 23 days, with no evidence of mortality displacement. Cold-related mortality is an important public health problem across Europe. It should not be underestimated by public health authorities because of the recent focus on heat-wave episodes.

Modifiers of the temperature and mortality association in seven US cities.

M O'Neill (2003)
This paper examines effect modification of heat- and cold-related mortality in seven US cities in 1986-1993. City-specific Poisson regression analyses of daily noninjury mortality were fit with predictors of mean daily apparent temperature (a construct reflecting physiologic effects of temperature and humidity), time, barometric pressure, day of the week, and particulate matter less than 10 micro m in aerodynamic diameter. Percentage change in mortality was calculated at 29 degrees C apparent temperature (lag 0) and at -5 degrees C (mean of lags 1, 2, and 3) relative to 15 degrees C. Separate models were fit to death counts stratified by age, race, gender, education, and place of death. Effect estimates were combined across cities, treating city as a random effect. Deaths among Blacks compared with Whites, deaths among the less educated, and deaths outside a hospital were more strongly associated with hot and cold temperatures, but gender made no difference. Stronger cold associations were found for those less than age 65 years, but heat effects did not vary by age. The strongest effect modifier was place of death for heat, with out-of-hospital effects more than five times greater than in-hospital deaths, supporting the biologic plausibility of the associations. Place of death, race, and educational attainment indicate vulnerability to temperature-related mortality, reflecting inequities in health impacts related to climate change.