Automated assembly of a reference taxonomy for phylogenetic data synthesis 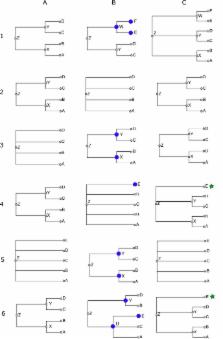 Bastian Schäferhoff,  Andreas Fleischmann,  Eberhard Fischer … (2010)
Background In the large angiosperm order Lamiales, a diverse array of highly specialized life strategies such as carnivory, parasitism, epiphytism, and desiccation tolerance occur, and some lineages possess drastically accelerated DNA substitutional rates or miniaturized genomes. However, understanding the evolution of these phenomena in the order, and clarifying borders of and relationships among lamialean families, has been hindered by largely unresolved trees in the past. Results Our analysis of the rapidly evolving trnK/matK, trnL-F and rps16 chloroplast regions enabled us to infer more precise phylogenetic hypotheses for the Lamiales. Relationships among the nine first-branching families in the Lamiales tree are now resolved with very strong support. Subsequent to Plocospermataceae, a clade consisting of Carlemanniaceae plus Oleaceae branches, followed by Tetrachondraceae and a newly inferred clade composed of Gesneriaceae plus Calceolariaceae, which is also supported by morphological characters. Plantaginaceae (incl. Gratioleae) and Scrophulariaceae are well separated in the backbone grade; Lamiaceae and Verbenaceae appear in distant clades, while the recently described Linderniaceae are confirmed to be monophyletic and in an isolated position. Conclusions Confidence about deep nodes of the Lamiales tree is an important step towards understanding the evolutionary diversification of a major clade of flowering plants. The degree of resolution obtained here now provides a first opportunity to discuss the evolution of morphological and biochemical traits in Lamiales. The multiple independent evolution of the carnivorous syndrome, once in Lentibulariaceae and a second time in Byblidaceae, is strongly supported by all analyses and topological tests. The evolution of selected morphological characters such as flower symmetry is discussed. The addition of further sequence data from introns and spacers holds promise to eventually obtain a fully resolved plastid tree of Lamiales.

Biodiversity informatics: the challenge of linking data and the role of shared identifiers.

Roderic Page (2008)
A major challenge facing biodiversity informatics is integrating data stored in widely distributed databases. Initial efforts have relied on taxonomic names as the shared identifier linking records in different databases. However, taxonomic names have limitations as identifiers, being neither stable nor globally unique, and the pace of molecular taxonomic and phylogenetic research means that a lot of information in public sequence databases is not linked to formal taxonomic names. This review explores the use of other identifiers, such as specimen codes and GenBank accession numbers, to link otherwise disconnected facts in different databases. The structure of these links can also be exploited using the PageRank algorithm to rank the results of searches on biodiversity databases. The key to rich integration is a commitment to deploy and reuse globally unique, shared identifiers [such as Digital Object Identifiers (DOIs) and Life Science Identifiers (LSIDs)], and the implementation of services that link those identifiers.

Research and Societal Benefits of the Global Biodiversity Information Facility