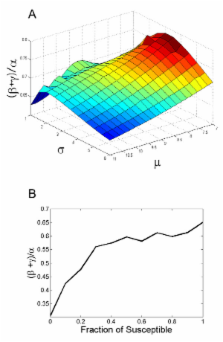 Lumpy skin disease (LSD) is a severe viral disease of cattle. Circumstantial evidence suggests that the virus is transmitted mechanically by blood-feeding arthropods. We compared the importance of transmission via direct and indirect contact in field conditions by using mathematical tools. We analyzed a dataset collected during the LSD outbreak in 2006 in a large dairy herd, which included ten separated cattle groups. Outbreak dynamics and risk factors for LSD were assessed by a transmission model. Transmission by three contact modes was modelled; indirect contact between the groups within a herd, direct contact or contact via common drinking water within the groups and transmission by contact during milking procedure. Indirect transmission was the only parameter that could solely explain the entire outbreak dynamics and was estimated to have an overall effect that was over 5 times larger than all other possible routes of transmission, combined. The R 0 value induced by indirect transmission per the presence of an infectious cow for 1 day in the herd was 15.7, while the R 0 induced by direct transmission was 0.36. Sensitivity analysis showed that this result is robust to a wide range of assumptions regarding mean and standard deviation of incubation period and regarding the existence of sub-clinically infected cattle. These results indicate that LSD virus spread within the affected herd could hardly be attributed to direct contact between cattle or contact through the milking procedure. It is therefore concluded that transmission mostly occurs by indirect contact, probably by flying, blood-sucking insects. This has important implications for control of LSD.

Capripoxviruses: an emerging worldwide threat to sheep, goats and cattle.

D Boyle,  R Kitching,  Timothy Bowden … (2008)
Capripoxviruses are the cause of sheeppox, goatpox and lumpy skin disease (LSD) of cattle. These diseases are of great economic significance to farmers in regions in which they are endemic and are a major constraint to international trade in livestock and their products. Although the distribution of capripoxviruses is considerably reduced from what it was even 50 years ago, they are now expanding their territory, with recent outbreaks of sheeppox or goatpox in Vietnam, Mongolia and Greece, and outbreaks of LSD in Ethiopia, Egypt and Israel. Increased legal and illegal trade in live animals provides the potential for further spread, with, for instance, the possibility of LSD becoming firmly established in Asia. This review briefly summarizes what is known about capripoxviruses, including their impact on livestock production, their geographic range, host-specificity, clinical disease, transmission and genomics, and considers current developments in diagnostic tests and vaccines. Capripoxviruses have the potential to become emerging disease threats because of global climate change and changes in patterns of trade in animals and animal products. They also could be used as economic bioterrorism agents.

Transmission dynamics and epidemiology of BSE in British cattle.

Jim Ryan,  Susan A. Austin,  S. Mawhinney … (1996)
A comprehensive analysis of the bovine spongiform encephalopathy (BSE) epidemic in cattle in Great Britain assesses past, present and future patterns in the incidence of infection and disease, and allows a critical appraisal of different culling policies for eradication of the disease.

P Mellor,  C M Chihota,  R Kitching … (2001)
Aedes aegypti female mosquitoes are capable of the mechanical transmission of lumpy skin disease virus (LSDV) from infected to susceptible cattle. Mosquitoes that had fed upon lesions of LSDV-infected cattle were able to transmit virus to susceptible cattle over a period of 2-6 days post-infective feeding. Virus was isolated from the recipient animals in 5 out of 7 cases. The clinical disease recorded in the animals exposed to infected mosquitoes was generally of a mild nature, with only one case being moderate. LSDV has long been suspected to be insect transmitted, but these findings are the first to demonstrate this unequivocally, and they suggest that mosquito species are competent vectors.