The Effect of Nintedanib on T-Cell Activation, Subsets and Functions 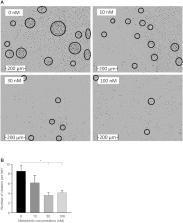 T cells are important regulators of inflammation and, via release of mediators, can contribute to pulmonary fibrosis. Nintedanib is approved for the treatment of idiopathic pulmonary fibrosis, systemic sclerosis-associated interstitial lung disease (ILD) and chronic fibrosing ILDs with a progressive phenotype. However, how nintedanib targets T cells has not been elucidated.

We investigated the immunomodulatory effects of nintedanib on T cells and peripheral blood mononuclear cells isolated from healthy donors. Cells were pre-incubated with different concentrations of nintedanib and then stimulated for 24 hours with anti-CD3 with or without anti-CD28 and with or without different cytokines. Levels of interferon gamma (IFN-γ), interleukin (IL)-2, IL-4, IL-5, IL-10, IL-12p70 and IL-13 were quantitated. Western blotting with primary antibodies against phospho-Lck-Y394, phospho-Lck-Y505, Lck-total and Cofilin examined the phosphorylation level of the Lck protein. In vitro T-cell proliferation, T-cell clustering and different T-cell populations were also assessed.

Nintedanib blocked T-cell activation through inhibiting Lck-Y394 phosphorylation. Pretreatment of T cells with nintedanib reduced cluster formation as a marker of activation and inhibited the release of IFN-γ, IL-2, IL-4, IL-5, IL-10, IL-12p70 and IL-13 at clinically relevant concentrations ranging from 5–77 nmol/L. Nintedanib did not alter T-cell proliferation or numbers of CD4+ and CD8+ T cells, but did increase stimulated Th17-like cells without increasing IL-17A levels.

These immunomodulatory effects may further explain how nintedanib slows the progression of pulmonary fibrosis in various ILDs.

Efficacy and safety of nintedanib in idiopathic pulmonary fibrosis.

Luca Richeldi,  Roland M du Bois,  Ganesh Raghu … (2014)
Nintedanib (formerly known as BIBF 1120) is an intracellular inhibitor that targets multiple tyrosine kinases. A phase 2 trial suggested that treatment with 150 mg of nintedanib twice daily reduced lung-function decline and acute exacerbations in patients with idiopathic pulmonary fibrosis. We conducted two replicate 52-week, randomized, double-blind, phase 3 trials (INPULSIS-1 and INPULSIS-2) to evaluate the efficacy and safety of 150 mg of nintedanib twice daily as compared with placebo in patients with idiopathic pulmonary fibrosis. The primary end point was the annual rate of decline in forced vital capacity (FVC). Key secondary end points were the time to the first acute exacerbation and the change from baseline in the total score on the St. George's Respiratory Questionnaire, both assessed over a 52-week period. A total of 1066 patients were randomly assigned in a 3:2 ratio to receive nintedanib or placebo. The adjusted annual rate of change in FVC was -114.7 ml with nintedanib versus -239.9 ml with placebo (difference, 125.3 ml; 95% confidence interval [CI], 77.7 to 172.8; P<0.001) in INPULSIS-1 and -113.6 ml with nintedanib versus -207.3 ml with placebo (difference, 93.7 ml; 95% CI, 44.8 to 142.7; P<0.001) in INPULSIS-2. In INPULSIS-1, there was no significant difference between the nintedanib and placebo groups in the time to the first acute exacerbation (hazard ratio with nintedanib, 1.15; 95% CI, 0.54 to 2.42; P=0.67); in INPULSIS-2, there was a significant benefit with nintedanib versus placebo (hazard ratio, 0.38; 95% CI, 0.19 to 0.77; P=0.005). The most frequent adverse event in the nintedanib groups was diarrhea, with rates of 61.5% and 18.6% in the nintedanib and placebo groups, respectively, in INPULSIS-1 and 63.2% and 18.3% in the two groups, respectively, in INPULSIS-2. In patients with idiopathic pulmonary fibrosis, nintedanib reduced the decline in FVC, which is consistent with a slowing of disease progression; nintedanib was frequently associated with diarrhea, which led to discontinuation of the study medication in less than 5% of patients. (Funded by Boehringer Ingelheim; INPULSIS-1 and INPULSIS-2 ClinicalTrials.gov numbers, NCT01335464 and NCT01335477.).

Lutz Wollin,  Eva Wex,  Alexander Pautsch … (2015)
Idiopathic pulmonary fibrosis (IPF) is a progressive and ultimately fatal disease characterised by fibrosis of the lung parenchyma and loss of lung function. Although the pathogenic pathways involved in IPF have not been fully elucidated, IPF is believed to be caused by repetitive alveolar epithelial cell injury and dysregulated repair, in which there is uncontrolled proliferation of lung fibroblasts and differentiation of fibroblasts into myofibroblasts, which excessively deposit extracellular matrix (ECM) proteins in the interstitial space. A number of profibrotic mediators including platelet-derived growth factor (PDGF), fibroblast growth factor (FGF) and transforming growth factor-β are believed to play important roles in the pathogenesis of IPF. Nintedanib is a potent small molecule inhibitor of the receptor tyrosine kinases PDGF receptor, FGF receptor and vascular endothelial growth factor receptor. Data from in vitro studies have shown that nintedanib interferes with processes active in fibrosis such as fibroblast proliferation, migration and differentiation, and the secretion of ECM. In addition, nintedanib has shown consistent anti-fibrotic and anti-inflammatory activity in animal models of lung fibrosis. These data provide a strong rationale for the clinical efficacy of nintedanib in patients with IPF, which has recently been demonstrated in phase III clinical trials.