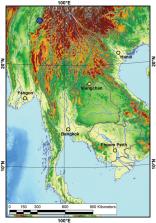 Unio rectangularis Tapparone-Canefri, 1889 is a little-known nominal species of freshwater mussels described from a tributary of the Ayeyarwady River in Myanmar. This taxon was considered a synonym of Gibbosula laosensis (Lea, 1863), a margaritiferid species. However, the range of Gibbosula laosensis does not encompass the Ayeyarwady River watershed. Here we re-examine the holotype of Unio rectangularis and provide a conchological re-description of this species. Based on conchological features such as the shell shape, elevated umbo, and the structure of lateral and pseudocardinal teeth, we transfer this taxon to the genus Indonaia Prashad, 1918 and propose I. rectangularis (Tapparone-Canefri, 1889), comb. nov. It appears to be a rare freshwater mussel species with a restricted range, because it has not been found since the original description. Two additional species in this genus are known from Myanmar, i.e. Indonaia andersoniana (Nevill, 1877) and I. subclathrata (Martens, 1899).

The non-marine aquatic Mollusca of Thailand

Ivan Bolotov, Alexander Kondakov, Ilya Vikhrev … (2017)
The concept of long-lived (ancient) lakes has had a great influence on the development of evolutionary biogeography. According to this insight, a number of lakes on Earth have existed for several million years (e.g., Baikal and Tanganyika) and represent unique evolutionary hotspots with multiple intra-basin radiations. In contrast, rivers are usually considered to be variable systems, and the possibility of their long-term existence during geological epochs has never been tested. In this study, we reconstruct the history of freshwater basin interactions across continents based on the multi-locus fossil-calibrated phylogeny of freshwater mussels (Unionidae). These mussels most likely originated in Southeast and East Asia in the Jurassic, with the earliest expansions into North America and Africa (since the mid-Cretaceous) following the colonization of Europe and India (since the Paleocene). We discovered two ancient monophyletic mussel radiations (mean age ~51–55 Ma) within the paleo-Mekong catchment (i.e., the Mekong, Siam, and Malacca Straits paleo-river drainage basins). Our findings reveal that the Mekong may be considered a long-lived river that has existed throughout the entire Cenozoic epoch.