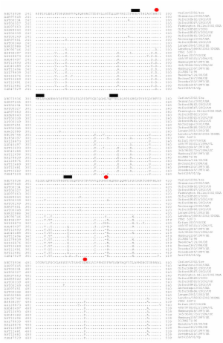 Noroviruses are the leading cause of infectious non-bacterial gastroenteritis in Ireland (population 4 million). Due to the number of outbreaks, its massive impact on the Irish health service and its seasonality, Norovirus has gained public notoriety as The Winter Vomiting Bug. The increase in cases in Ireland in the 2002–2003 season coincided with the emergence of two new Genogroup II genotype 4 variant clusters of Norovirus worldwide.

Little research has been done on the epidemiology or molecular biology of Norovirus strains in Ireland. In an effort to combat this discrepancy, we cloned a full length human norovirus genome as a cDNA clone (J3) which can produce full length transcripts in vitro. A polymerase mutant cDNA clone (X1), in addition to a sub genomic cDNA clone (1A) were produced for use in future work.

Carlow virus (Hu/NoV/GII/Carlow/2002/Ire) genome is 7559 nts in length, excluding the 3-end poly A tail and represents the first Norovirus strain from Ireland to be sequenced.

Carlow virus is a member of the Farmington Hills variant cluster of Genogroup II genotype 4 noroviruses.

Norovirus and its histo-blood group antigen receptors: an answer to a historical puzzle.

Bertrand Tan,  Xi Jiang (2005)
Recent findings demonstrate that human histo-blood group antigens (HBGAs) serve as receptors for norovirus infection. The recognition of human HBGAs by noroviruses is a typical protein-carbohydrate interaction, in which the protruding domain of the viral capsid protein forms an interface with the oligosaccharide side-chains of the antigens, with a wide diversity among different strains. The human HBGA system is also highly polymorphic and is controlled by multiple gene families with silent alleles. The presence of such diversified molecules on the cell surfaces indicates a possible host defense mechanism against the changing external environment. As mild pathogens that replicate possibly only in the intestinal tract, noroviruses have developed unique strategies to overcome the host defense system. This has been shown by their genetic and structural variations, which explains why norovirus-associated diseases are so common and widespread in every population worldwide.

ABH and Lewis histo-blood group antigens, a model for the meaning of oligosaccharide diversity in the face of a changing world.

Séverine Marionneau,  Anne Cailleau-Thomas,  Jézabel Rocher … (2001)
Antigens of the ABH and Lewis histo-blood group family have been known for a long time. Yet their biological meaning is still largely obscure. Based on the available knowledge about the genes involved in their biosynthesis and about their tissue distribution in humans and other mammals, we discuss here the selective forces that may maintain or propagate these oligosaccharide antigens. The ABO, alpha 1,2fucosyltransferase and alpha 1,3fucosyltransferase enzyme families have been generated by gene duplications. Members of these families contribute to biosynthesis of the antigens through epistatic interactions. We suggest that the highly polymorphic genes of each family provide intraspecies diversity that allows coping with diverse and rapidly evolving pathogens. In contrast, the genes of low frequency polymorphism are expected to play roles at the cellular level, although they may be dispensable at the individual level. In addition, some members of these three gene families are expected to be functionally redundant and may either provide a reservoir for additional diversity in the future or become inactivated. We also discuss the role of the ABH and Lewis histo-blood group antigens in pathologies such as cancer and cardiovascular diseases, but argue that it is merely incidental and devoid of evolutionary impact.

Coexistence of multiple genotypes, including newly identified genotypes, in outbreaks of gastroenteritis due to Norovirus in Japan.

Tsutomu Kageyama,  Reiko Takai,  Kazuhiko Katayama … (2004)
Norovirus (NV) (formerly called Norwalk-like virus) is the most common cause of acute nonbacterial gastroenteritis in humans. Recently, we reported an NV genotyping scheme based on variability in the capsid N-terminal/shell (N/S) domain gene (Katayama et al., Virology 299:225-239, 2002). We found 19 genotypes, including nine of genogroup I and 10 of genogroup II. In the present study, we investigated the molecular epidemiology of NV from 66 outbreaks that occurred in Saitama Prefecture, Japan, from 1997 to 2002. We screened 416 stool specimens by a real-time reverse transcription (RT)-PCR method (Kageyama et al., J. Clin. Microbiol. 41:1548-1557, 2003) and detected 156 NV-positive specimens, from which we amplified the capsid N/S domain gene by RT-PCR and then cloned the PCR products. After sequencing these clones, we obtained 368 sequence variants (strains). By applying our classification scheme to the strains from Saitama and other published strains, we identified a total of 31 genotypes, including an additional five genotypes for genogroup I and seven for genogroup II. Of the 31 genotypes, 26 were present in the Saitama area during that time period. These results provide additional evidence for the great diversity of human NV genotypes. Specimens from all shellfish-related infections contained multiple genotypes, including several new genotypes. On the other hand, single genotypes were observed mostly in outbreaks that originated in semiclosed communities. Thus, the number of NV genotypes in each outbreak depended on the route of transmission.