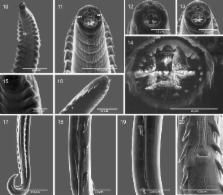 A new species of nematode, Pterygodermatites ( Pterygodermatites) mexicana n. sp., is described based on specimens recovered from the intestine of the gray sac-winged bat, Balantiopteryx plicata (Chiroptera, Emballonuridae), from the Biosphere Reserve “Sierra de Huautla” in the state of Morelos, Mexico. This is the second species in the genus described from bats in the New World, since most of the rictaluriids reported in these hosts belong to the closely related genus Rictularia Froelich, 1802. However, members of Rictularia possess only a single oesophageal tooth at the base of the buccal capsule, whereas in the current nematodes three conspicuous oesophageal teeth are present. They are therefore included in Pterygodermatites Wedl, 1861. The new species is characterized by the presence of 23 small denticles on the periphery of the buccal capsule and by the presence of 40 and 66 pairs of cuticular processes in males and females, respectively. Additionally, males possess 3–4 ventral precloacal fan-like processes, and the cuticular processes of females are divided into 40 pairs of comb-like and 26 pairs of spine-like processes; the vulva opens on the level of approximately pair 40. The dorsally directed stoma and the 40 prevulvar cuticular processes makes it difficult to place the species in any of the subgenera present in the New World, yet characters correspond with the diagnosis of Pterygodermatites ( Pterygodermatites) in the Mediterranean region and North Africa.

Oliver A. Nascimento,  José H Tebaldi,  E HOPPE … (2010)
In a parasitological survey of free-ranging Cerdocyon thous (Carnivora: Canidae) from Brazilian Caatinga shrubland, a new species of Pterygodermatites (Multipectines) was recovered from the small intestine of this host. Morphological analysis showed that P. (Multipectines) pluripectinata n. sp. is distinguished from all other congeneric species mainly by the numerous plate-like projections and male caudal morphology and spicular length. There are few records on the occurrence of this genus in Neotropical regions.

Vasyl Tkach,  Z Swiderski (1995)
External morphology of the nematode Pterygodermatites bovieri (Blanchard, 1886), a very rare parasite of bats in the Palaearctic region, was studied by scanning electron microscopy. Special attention was paid to the cephalic end structure and cuticular armament, which are of great systematic importance in this group of nematodes. The mouth opening of P. bovieri is subterminal and oriented dorsally. Numerous sclerotized denticles, arranged in two rows, are situated in the buccal cavity around the mouth opening. They are better developed in its ventral part. In females there are 12-14 ventral denticles. Cephalic papillae are arranged in two rows: internal (six papillae--two dorsal, two lateral and two ventral) and external (four papillae). Amphids are small, situated close to lateral, cephalic papillae of the internal row. Males possess 40-41 cuticular combs in each ventro-lateral plate row, and, in addition, a short row of four ventral, unpaired precloacal fans. Females in our material possessed 68 cuticular elements represented by combs and spines, in each row. Changes of the cuticular elements shape along the nematode body length are described. Results of SEM observations are compared with previous descriptions of P. bovieri based on the light microscopical observations.