Diagnosis and Management of Non-Variceal Gastrointestinal Hemorrhage: A Review of Current Guidelines and Future Perspectives 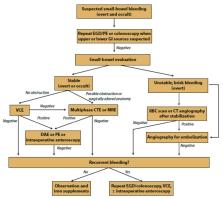 Non-variceal gastrointestinal bleeding (GIB) is a significant cause of mortality and morbidity worldwide which is encountered in the ambulatory and hospital settings. Hemorrhage form the gastrointestinal (GI) tract is categorized as upper GIB, small bowel bleeding (also formerly referred to as obscure GIB) or lower GIB. Although the etiologies of GIB are variable, a strong, consistent risk factor is use of non-steroidal anti-inflammatory drugs. Advances in the endoscopic diagnosis and treatment of GIB have led to improved outcomes. We present an updated review of the current practices regarding the diagnosis and management of non-variceal GIB, and possible future directions.

A risk score to predict need for treatment for upper-gastrointestinal haemorrhage.

O Blatchford,  James W. Murray,  M Blatchford (2000)
Current risk-stratification systems for patients with acute upper-gastrointestinal bleeding discriminate between patients at high or low risks of dying or rebleeding. We therefore developed and prospectively validated a risk score to identify a patient's need for treatment. Our first study used data from 1748 patients admitted for upper-gastrointestinal haemorrhage. By logistic regression, we derived a risk score that predicts patients' risks of needing blood transfusion or intervention to control bleeding, rebleeding, or dying. From this score, we developed a simplified fast-track screen for use at initial presentation. In a second study, we prospectively validated this score using receiver operating characteristic (ROC) curves--a measure of the validity of a scoring system--and chi2 goodness-of-fit testing with data from 197 patients. We also validated the quicker screening tool. We calculated risk scores from patients' admission haemoglobin, blood urea, pulse, and systolic blood pressure, as well as presentation with syncope or melaena, and evidence of hepatic disease or cardiac failure. The score discriminated well with a ROC curve area of 0.92 (95% CI 0.88-0.95). The score was well calibrated for patients needing treatment (p=0.84). Our score identified patients at low or high risk of needing treatment to manage their bleeding. This score should assist the clinical management of patients presenting with upper-gastrointestinal haemorrhage, but requires external validation.

Management of patients with ulcer bleeding.

Michael D. Jensen,  Loren Laine (2012)
This guideline presents recommendations for the step-wise management of patients with overt upper gastrointestinal bleeding. Hemodynamic status is first assessed, and resuscitation initiated as needed. Patients are risk-stratified based on features such as hemodynamic status, comorbidities, age, and laboratory tests. Pre-endoscopic erythromycin is considered to increase diagnostic yield at first endoscopy. Pre-endoscopic proton pump inhibitor (PPI) may be considered to decrease the need for endoscopic therapy but does not improve clinical outcomes. Upper endoscopy is generally performed within 24h. The endoscopic features of ulcers direct further management. Patients with active bleeding or non-bleeding visible vessels receive endoscopic therapy (e.g., bipolar electrocoagulation, heater probe, sclerosant, clips) and those with an adherent clot may receive endoscopic therapy; these patients then receive intravenous PPI with a bolus followed by continuous infusion. Patients with flat spots or clean-based ulcers do not require endoscopic therapy or intensive PPI therapy. Recurrent bleeding after endoscopic therapy is treated with a second endoscopic treatment; if bleeding persists or recurs, treatment with surgery or interventional radiology is undertaken. Prevention of recurrent bleeding is based on the etiology of the bleeding ulcer. H. pylori is eradicated and after cure is documented anti-ulcer therapy is generally not given. Nonsteroidal anti-inflammatory drugs (NSAIDs) are stopped; if they must be resumed low-dose COX-2-selective NSAID plus PPI is used. Patients with established cardiovascular disease who require aspirin should start PPI and generally re-institute aspirin soon after bleeding ceases (within 7 days and ideally 1-3 days). Patients with idiopathic ulcers receive long-term anti-ulcer therapy.

G Beccari,  C Abbiati,  Roberto De Masi … (2004)
Capsule endoscopy (CE) is a promising diagnostic tool for the study of patients with obscure gastrointestinal bleeding. However, the diagnostic yield of this technique has not been adequately studied. We evaluated sensitivity and specificity of CE and the outcome after CE in patients with obscure gastrointestinal bleeding. One hundred consecutive patients (all with recent negative upper and lower endoscopy; 26 with ongoing overt bleeding [group A], 31 with previous overt bleeding [group B], and 43 with guaiac-positive stools and iron-deficiency anemia [group C]) underwent CE. The yield of positive findings on CE was 92.3% in group A, 12.9% in group B, and 44.2% in group C (P < 0.0001, A vs. B, A vs. C). Angiodysplasia (29%) and Crohn's disease (6%) were the most common diagnoses. Sensitivity, specificity, and positive and negative predictive values of CE were 88.9%, 95%, 97%, and 82.6%, respectively. CE results led to treatments resolving the bleeding in 86.9% of patients undergoing the procedure while actively bleeding. Capsule retention because of unsuspected stenosis occurred in 5 patients and required surgery, which resolved the clinical problem, in 4 patients. CE is an effective diagnostic tool for patients with obscure GI bleeding. The best candidates for the procedure are those with ongoing obscure-overt bleeding or with obscure-occult bleeding. If done early in the course of the workup, CE could shorten considerably the time to diagnosis, lead to definitive treatment in a relevant proportion of patients, and spare a number of alternative investigations with low diagnostic yield.