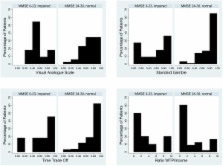 The framing of decisions and the psychology of choice.

D Kahneman,  A Tversky (1981)
The psychological principles that govern the perception of decision problems and the evaluation of probabilities and outcomes produce predictable shifts of preference when the same problem is framed in different ways. Reversals of preference are demonstrated in choices regarding monetary outcomes, both hypothetical and real, and in questions pertaining to the loss of human lives. The effects of frames on preferences are compared to the effects of perspectives on perceptual appearance. The dependence of preferences on the formulation of decision problems is a significant concern for the theory of rational choice.