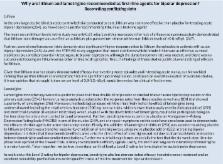 The Canadian Network for Mood and Anxiety Treatments ( CANMAT) previously published treatment guidelines for bipolar disorder in 2005, along with international commentaries and subsequent updates in 2007, 2009, and 2013. The last two updates were published in collaboration with the International Society for Bipolar Disorders ( ISBD). These 2018 CANMAT and ISBD Bipolar Treatment Guidelines represent the significant advances in the field since the last full edition was published in 2005, including updates to diagnosis and management as well as new research into pharmacological and psychological treatments. These advances have been translated into clear and easy to use recommendations for first, second, and third‐ line treatments, with consideration given to levels of evidence for efficacy, clinical support based on experience, and consensus ratings of safety, tolerability, and treatment‐emergent switch risk. New to these guidelines, hierarchical rankings were created for first and second‐ line treatments recommended for acute mania, acute depression, and maintenance treatment in bipolar I disorder. Created by considering the impact of each treatment across all phases of illness, this hierarchy will further assist clinicians in making evidence‐based treatment decisions. Lithium, quetiapine, divalproex, asenapine, aripiprazole, paliperidone, risperidone, and cariprazine alone or in combination are recommended as first‐line treatments for acute mania. First‐line options for bipolar I depression include quetiapine, lurasidone plus lithium or divalproex, lithium, lamotrigine, lurasidone, or adjunctive lamotrigine. While medications that have been shown to be effective for the acute phase should generally be continued for the maintenance phase in bipolar I disorder, there are some exceptions (such as with antidepressants); and available data suggest that lithium, quetiapine, divalproex, lamotrigine, asenapine, and aripiprazole monotherapy or combination treatments should be considered first‐line for those initiating or switching treatment during the maintenance phase. In addition to addressing issues in bipolar I disorder, these guidelines also provide an overview of, and recommendations for, clinical management of bipolar II disorder, as well as advice on specific populations, such as women at various stages of the reproductive cycle, children and adolescents, and older adults. There are also discussions on the impact of specific psychiatric and medical comorbidities such as substance use, anxiety, and metabolic disorders. Finally, an overview of issues related to safety and monitoring is provided. The CANMAT and ISBD groups hope that these guidelines become a valuable tool for practitioners across the globe.

A randomized add-on trial of an N-methyl-D-aspartate antagonist in treatment-resistant bipolar depression.

Lobna Ibrahim,  Giacomo Salvadore,  David Luckenbaugh … (2010)
Existing therapies for bipolar depression have a considerable lag of onset of action. Pharmacological strategies that produce rapid antidepressant effects-for instance, within a few hours or days-would have an enormous impact on patient care and public health. To determine whether an N-methyl-D-aspartate-receptor antagonist produces rapid antidepressant effects in subjects with bipolar depression. A randomized, placebo-controlled, double-blind, crossover, add-on study conducted from October 2006 to June 2009. Mood Disorders Research Unit at the National Institute of Mental Health, Bethesda, Maryland. Patients Eighteen subjects with DSM-IV bipolar depression (treatment-resistant). Subjects maintained at therapeutic levels of lithium or valproate received an intravenous infusion of either ketamine hydrochloride (0.5 mg/kg) or placebo on 2 test days 2 weeks apart. The Montgomery-Asberg Depression Rating Scale was used to rate subjects at baseline and at 40, 80, 110, and 230 minutes and on days 1, 2, 3, 7, 10, and 14 postinfusion. Change in Montgomery-Asberg Depression Rating Scale primary efficacy measure scores. Within 40 minutes, depressive symptoms significantly improved in subjects receiving ketamine compared with placebo (d = 0.52, 95% confidence interval [CI], 0.28-0.76); this improvement remained significant through day 3. The drug difference effect size was largest at day 2 (d = 0.80, 95% CI, 0.55-1.04). Seventy-one percent of subjects responded to ketamine and 6% responded to placebo at some point during the trial. One subject receiving ketamine and 1 receiving placebo developed manic symptoms. Ketamine was generally well tolerated; the most common adverse effect was dissociative symptoms, only at the 40-minute point. In patients with treatment-resistant bipolar depression, robust and rapid antidepressant effects resulted from a single intravenous dose of an N-methyl-D-aspartate antagonist.

Carlos A Zarate,  Nancy Brutsche,  Lobna Ibrahim … (2012)
Currently, no pharmacological treatments for bipolar depression exist that exert rapid (within hours) antidepressant or antisuicidal effects. We previously reported that intravenous administration of the N-methyl-D-aspartate antagonist ketamine produced rapid antidepressant effects in patients with treatment-resistant bipolar depression. The present study sought to replicate this finding in an independent sample. In this double-blind, randomized, crossover, placebo-controlled study, 15 subjects with DSM-IV bipolar I or II depression maintained on therapeutic levels of lithium or valproate received a single intravenous infusion of either ketamine hydrochloride (.5 mg/kg) or placebo on 2 test days 2 weeks apart. The primary outcome measure was the Montgomery-Asberg Depression Rating Scale, which was used to rate overall depressive symptoms at baseline; at 40, 80, 110, and 230 minutes postinfusion; and on days 1, 2, 3, 7, 10, and 14 postinfusion. Within 40 minutes, depressive symptoms, as well as suicidal ideation, significantly improved in subjects receiving ketamine compared with placebo (d = .89, 95% confidence interval = .61-1.16, and .98, 95% confidence interval = .64-1.33, respectively); this improvement remained significant through day 3. Seventy-nine percent of subjects responded to ketamine and 0% responded to placebo at some point during the trial. The most common side effect was dissociative symptoms, which occurred only at the 40-minute time point. This study replicated our previous finding that patients with bipolar depression who received a single ketamine infusion experienced a rapid and robust antidepressant response. In addition, we found that ketamine rapidly improved suicidal ideation in these patients. Copyright © 2012 Society of Biological Psychiatry. Published by Elsevier Inc. All rights reserved.