Immune Response and COVID-19: A mirror image of Sepsis 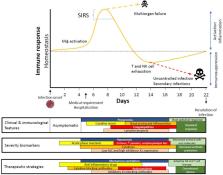 The emergence of SARS-CoV-2 virus and its associated disease COVID-19 have triggered significant threats to public health, in addition to political and social changes. An important number of studies have reported the onset of symptoms compatible with pneumonia accompanied by coagulopathy and lymphocytopenia during COVID-19. Increased cytokine levels, the emergence of acute phase reactants, platelet activation and immune checkpoint expression are some of the biomarkers postulated in this context. As previously observed in prolonged sepsis, T-cell exhaustion due to SARS-CoV-2 and even their reduction in numbers due to apoptosis hinder the response to the infection. In this review, we synthesized the immune changes observed during COVID-19, the role of immune molecules as severity markers for patient stratification and their associated therapeutic options.

COVID-19 and the cardiovascular system.

Type 1 interferons as a potential treatment against COVID-19

Erwan Sallard,  François-Xavier Lescure,  Yazdan Yazdanpanah … (2020)
Type 1 interferons have a broad antiviral activity in vitro and are currently evaluated in a clinical trial to treat MERS-CoV. In this review, we discuss preliminary data concerning the potential activity of type 1 interferons on SARS-CoV-2, and the relevance of evaluating these molecules in clinical trials for the treatment of COVID-19.

John Osborne,  Timothy Buchman,  Kenneth J. Hui … (2001)
Patients with sepsis have impaired host defenses that contribute to the lethality of the disorder. Recent work implicates lymphocyte apoptosis as a potential factor in the immunosuppression of sepsis. If lymphocyte apoptosis is an important mechanism, specific subsets of lymphocytes may be more vulnerable. A prospective study of lymphocyte cell typing and apoptosis was conducted in spleens from 27 patients with sepsis and 25 patients with trauma. Spleens from 16 critically ill nonseptic (3 prospective and 13 retrospective) patients were also evaluated. Immunohistochemical staining showed a caspase-9-mediated profound progressive loss of B and CD4 T helper cells in sepsis. Interestingly, sepsis did not decrease CD8 T or NK cells. Although there was no overall effect on lymphocytes from critically ill nonseptic patients (considered as a group), certain individual patients did exhibit significant loss of B and CD4 T cells. The loss of B and CD4 T cells in sepsis is especially significant because it occurs during life-threatening infection, a state in which massive lymphocyte clonal expansion should exist. Mitochondria-dependent lymphocyte apoptosis may contribute to the immunosuppression in sepsis by decreasing the number of immune effector cells. Similar loss of lymphocytes may be occurring in critically ill patients with other disorders.