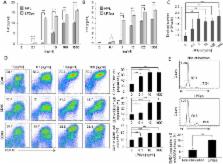 A lipopolysaccharide from Pantoea agglomerans (LPSpa) has been applied to various fields for human use as a Toll-like receptor 4 ligand and its safety has been confirmed. Here, we showed for the first time the application of LPSpa as an effective mucosal adjuvant for activating vaccine-induced antigen specific immune responses. Mice sublingually immunized with influenza vaccine (HA split vaccine) with LPSpa induced both HA-specific IgG (systemic) and IgA (mucosal) antibody responses, which led to a significant increase in survival rate against lethal influenza virus challenge compared with subcutaneous vaccination. After sublingual administration of ovalbumin with LPSpa, ovalbumin-specific mucosal IgA responses were induced at both mucosal surfaces close to the immunized site and at remote mucosal surfaces. Sublingual administration of LPSpa evoked local antigen-uptake by dendritic cells in cervical lymph nodes. LPSpa induced cytokine production and the maturation and proliferation of innate immune cells via Toll-like receptor 4 in dendritic cells. Collectively, these results suggest that LPSpa can be used as an effective mucosal adjuvant to stimulate and activate local innate immune cells to improve and enhance mucosal vaccine potency against various pathogens.

T Kaisho,  T Kawai,  O Takeuchi … (2001)
LPS, a major component of the cell wall of Gram-negative bacteria, can induce a variety of biological responses including cytokine production from macrophages, B cell proliferation, and endotoxin shock. All of them were completely abolished in MyD88-deficient mice, indicating the essential role of MyD88 in LPS signaling. However, MyD88-deficient cells still show activation of NF-kappaB and mitogen-activated protein kinase cascades, although the biological significance of this activation is not clear. In this study, we have examined the effects of LPS on dendritic cells (DCs) from wild-type and several mutant mice. LPS-induced cytokine production from DCs was dependent on MyD88. However, LPS could induce functional maturation of MyD88-deficient DCs, including up-regulation of costimulatory molecules and enhancement of APC activity. MyD88-deficient DCs could not mature in response to bacterial DNA, the ligand for Toll-like receptor (TLR)9, indicating that MyD88 is differentially required for TLR family signaling. MyD88-dependent and -independent pathways originate at the intracytoplasmic region of TLR4, because both cytokine induction and functional maturation were abolished in DCs from C3H/HeJ mice carrying the point mutation in the region. Finally, in vivo analysis revealed that MyD88-, but not TLR4-, deficient splenic CD11c(+) DCs could up-regulate their costimulatory molecule expression in response to LPS. Collectively, the present study provides the first evidence that the MyD88-independent pathway downstream of TLR4 can lead to functional DC maturation, which is critical for a link between innate and adaptive immunity.

Nicolas Çuburu,  Mi-Na Kweon,  Joo-Hye Song … (2007)
The potential of sublingual (s.l.) delivery of vaccine was examined in mice. We show the existence of a dense network of dendritic cells (DCs) in the s.l. epithelium and a rapid and transient increase in the frequency of s.l. DCs after topical application of cholera toxin (CT) adjuvant under the tongue. S.l. immunization with ovalbumin and CT induced vigorous systemic and mucosal antibody responses. Such treatment promoted mixed Th1 and Th2 cytokine responses and induced cytotoxic CD8(+) T cells in lung tissues and in systemic lymphoid organs. S.l. immunization was comparable to intranasal immunization and was superior to oral immunization regarding the magnitude and anatomic dissemination of the induced immune responses. S.l. administration of live influenza virus at a dose lethal by the nasal route was well tolerated and did not redirect virus to the olfactory bulb. These features underscore the potential of the s.l. mucosa to serve as an alternative vaccine delivery route.

Brian Jackson,  Y Yuki,  J McGhee … (2000)
We tested the notion that the mucosal adjuvant cholera toxin (CT) could target, in addition to nasal-associated lymphoreticular tissues, the olfactory nerves/epithelium (ON/E) and olfactory bulbs (OBs) when given intranasally. Radiolabeled CT ((125)I-CT) or CT-B subunit ((125)I-CT-B), when given intranasally to mice, entered the ON/E and OB and persisted for 6 days; however, neither molecule was present in nasal-associated lymphoreticular tissues beyond 24 h. This uptake into olfactory regions was monosialoganglioside (GM1) dependent. Intranasal vaccination with (125)I-tetanus toxoid together with unlabeled CT as adjuvant resulted in uptake into the ON/E but not the OB, whereas (125)I-tetanus toxoid alone did not penetrate into the CNS. We conclude that GM1-binding molecules like CT target the ON/E and are retrograde transported to the OB and may promote uptake of vaccine proteins into olfactory neurons. This raises concerns about the role of GM1-binding molecules that target neuronal tissues in mucosal immunity.

Nitto Denko Corporation provided support in the form of salaries for authors MF, DA, EK, AO, and MH, but did not have any additional role in the study design, data collection and analysis, decision to publish, or preparation of the manuscript. The specific roles of these authors are articulated in the author contributions section.