Assessment tools for unrecognized myocardial infarction: a cross-sectional analysis of the REasons for geographic and racial differences in stroke population 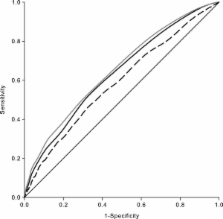 Routine electrocardiograms (ECGs) are not recommended for asymptomatic patients because the potential harms are thought to outweigh any benefits. Assessment tools to identify high risk individuals may improve the harm versus benefit profile of screening ECGs. In particular, people with unrecognized myocardial infarction (UMI) have elevated risk for cardiovascular events and death.

Despite examining a large number of potential correlates of UMI, the assessment tools did not provide a high level of discrimination. These data suggest defining groups with high prevalence of UMI for targeted screening will be difficult.

Concurrent and predictive validity of a self-reported measure of medication adherence.

Michele D Levine,  D Morisky,  Judith L. Green (1985)
Adherence to the medical regimen continues to rank as a major clinical problem in the management of patients with essential hypertension, as in other conditions treated with drugs and life-style modification. This article reviews the psychometric properties and tests the concurrent and predictive validity of a structured four-item self-reported adherence measure (alpha reliability = 0.61), which can be easily integrated into the medical visit. Items in the scale address barriers to medication-taking and permit the health care provider to reinforce positive adherence behaviors. Data on patient adherence to the medical regimen were collected at the end of a formalized 18-month educational program. Blood pressure measurements were recorded throughout a 3-year follow-up period. Results showed the scale to demonstrate both concurrent and predictive validity with regard to blood pressure control at 2 years and 5 years, respectively. Seventy-five percent of the patients who scored high on the four-item scale at year 2 had their blood pressure under adequate control at year 5, compared with 47% under control at year 5 for those patients scoring low (P less than 0.01).